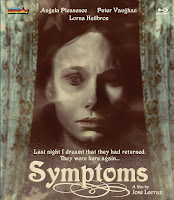 In 2010 the BFI published their Most Wanted list, a tantalising countdown of 75 British films classified as ‘missing, believed lost’. Of all these forgotten gems (which ranged from silent Hitchcock to '60s pop), nothing excited horror fans more than the inclusion of José Ramón Larraz’s 1974 little-seen cult classic, Symptoms.

Symptoms is available on BFI Player, here
Selected for the 1974 Cannes Film Festival before promptly falling into cinematic obscurity, this claustrophobic Repulsion-esque chiller, which tells the uncanny tale of a young woman’s descent into madness at a remote English country mansion, was long confined to the blurry terrains of VHS bootlegs and online rips.

Now lovingly restored and looking better than ever, Larraz’s infamous curio is available for all to enjoy on BFI player. And so, to celebrate the long-awaited arrival of a neglected genre classic, here are 5 more horror gems waiting to be discovered on BFI’s online platform.

The Night Has Eyes (dir Leslie Arliss, 1942)
One of only a handful of British horror films produced during WWII, this delicious slice of gothic melodrama (think Jane Eyre meets The Old Dark House) stars James Mason as Stephen, a reclusive composer living in an isolated mansion on the perennially misty Yorkshire Moors. When two lost women stumble on his property, Stephen offers shelter and a place to stay.

But as romance blossoms between the taciturn recluse and one of his new guests, so too does the macabre truth of Stephen’s dark past. Also released under the more salacious titles Terror House and Moonlight Madness, this atmospheric chiller was given the BBFC’s dreaded H-for-Horror rating when it was released in 1942, possibly thanks to its surprisingly nasty conclusion.

As ever, Mason makes for a broodingly effective leading man, while special mention should also go to Tucker McGuire for her scene-stealing role as man-hungry schoolteacher Doris. But the real stars are the Moors themselves – evocatively captured by Gunther Krampf (famed cinematographer whose work included Pandora’s Box and The Hands of Orlac) – which reek of dread and dark foreboding.

Fiend Without a Face (dir Arthur Crabtree, 1958)
Something of a cause célèbre when it was first unleashed in 1958, Arthur Crabtree’s low-budget monster mash was deemed so outrageous, and so morally reprehensible, that it actually sparked debate in Parliament, where questions were raised as to how a work of such supposed depravity had passed through the censors in all its gory glory. Years later, and of course the shock value has diminished.

But while the film may not still possess the power to appal with quite the same ferocity, it remains one of the most wonderfully twisted little sci-fi shockers of the period. The plot (typical of the atomic obsessed sci-fi pics of the time) concerns an army of nuclear-powered flying brains (complete with spinal cords) who attack a US military base.

Naysayers might dismiss this off-kilter British production as little more than a mindless (!) special-effects showcase – but when the climactic scenes are so unhinged and the stop-motion effects so glorious – who cares? If it all sounds frankly preposterous, that’s because it is. And wonderfully so.

As perversities and murders begin to mount around her, she must make sense of why she is there and how she can escape.

As with most of Rollin’s films, the end result is by no means perfect - the leisurely pacing can be testing at times (the lengthy sex scenes in particular feeling unnecessarily drawn out) - but for those of a more patient disposition and an keen eye for the perverse, this clinical shocker is quite unlike anything else, replete with scenes of abject terror which will not be quickly forgotten.

Heartless (dir Philip Ridley, 2009)
The long-awaited third feature from Philip Ridley (following his extraordinary sun-drenched slice of American gothic The Reflecting Skin, and the lesser-known, but equally fascinating backwoods allegory The Passion Of Darkly Noon) saw the London-born filmmaker return to his home turf with a Faustian morality tale set in the East End.

Jim Strurgess plays Jamie, a socially awkward teenage outcast born with a large heart-shaped birthmark on his face, who discovers a gang of demons are plaguing the streets of his hometown. As one would expect from one of horror cinema’s true visual poets, Heartless is a feast for the eyes, steeped in fertile symbolism and menacing atmospherics.

But perhaps most memorably, it is a richly empathetic piece of work, which succeeds as much as an unconventional character study as it does an unnerving and eccentric horror film.

The Strange Colour of Your Body’s Tears (dir Hélène Cattet & Bruno Forzani, 2013)
An audacious exercise pure, unadulterated style, this modern day giallo from the gloriously twisted minds of directing duo Hélène Cattet & Bruno Forzani (Amer) is one of the most visually imaginative horror films of recent years. Following the unexplained disappearance of his wife, a man is thrown into a web of mystery and intrigue as he attempts to uncover her whereabouts.

Traversing the labyrinthine halls of his ornamental apartment building, he encounters its various inhabitants, whose tales of sensuality and sadism play out before him. In this dreamlike (or should that be nightmarish?) world, traditional narrative gives way to a more sensory, instinctive approach to storytelling, resulting in an experience which can be as perplexing as it is hypnotic.

For those with a taste for something different, this truly singular work delivers devious surprises with every blood-splattered frame. Watch it loud. On the biggest screen you can.


You can also buy these films from Amazon