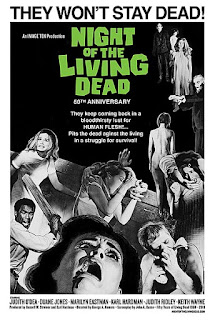 Night of the Living Dead is a 1968 American independent horror film written, directed, photographed and edited by George A. Romero, co-written by John Russo, and starring Duane Jones and Judith O'Dea. The story follows seven people who are trapped in a rural farmhouse in western Pennsylvania, which is besieged by a large and growing group of "living dead" monsters.

The film was completed on a $114,000 budget and shot outside Pittsburgh, where it had its theatrical premiere on October 1, 1968. The film grossed $12 million domestically and $18 million internationally, earning over 250 times its budget. Night of the Living Dead has been regarded as a cult classic by film scholars and critics, despite its being heavily criticized upon its release for its explicit gore. It eventually garnered critical acclaim and has been selected by the Library of Congress for preservation in the National Film Registry, as a film deemed "culturally, historically, or aesthetically significant."