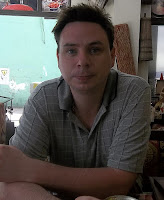 Michael Mulvihill is a long-time contributor to BLACK PETALS e-zine. This includes his issue #61 poems: A Love Story Beautiful, Capitalism’s Modern Architecture of Love, Red Brick, The Securocrats, and Toxic Addiction (+ the poems, Fatigued, O Mother, and Spike-Inverted Hearts for BP #58; “The Cleaner and the Collector” tale & all 6 BP #56 poems; BP #50’s story, “The Soul Scrubber”, and as featured vampire poet with A Vampire’s Dilemma: Love, Becoming a Vampire, Vampire Insomnia, and Vampiric War in The Kodori Valley; BP #49 poems, I, the Vampire, The Reluctant Vampire of Tbilisi, Vampire Observations, and Vampire Psychoanalysis).

The 30ish author published a short story, “Ethagoria Nebsonia,” in BP in 1998 and had a poem, “The Bombing,” in The Kingdom News about a domestic tragedy in Ireland.

"Siberian Hellhole" (2013) a horror novel, is his first novel to be published by The Wheelman Press. He is also a clinical psychotherapist and hypnotherapist and member of The I.C.H.P.

Tell us how you became involved in writing fiction.

Oh goodness David.  I was just a kid and I much preferred watching ‘V’ and ‘The Lost Boys’, than writing anything.  It is like I still do love my TV to this day.  I totally loved ‘American Gothic’ the TV pilot that was put off air, loved ‘Millenium’, ‘X Files’ and ‘Brimstone’, magnificent stuff.
From the ages of four to twelve I did not relate to school what so ever.  Weird! I now have six higher level qualifications up to an M.A. I just got scholarly.

But I swear on The Bible, when I was a kid, me, school, books, Heck! I was more interested in reading about mans’ inhumanity to man but NOT what was expected of me to read back in Junior School.

Once when I was a kid I picked up a very bloody magazine that explained what was happening to people in Argentina under the Juntas Military Regime of the 1980s, I was never examined about this, nor about The Holocaust, or how Russia defended itself against Nazi invasion.  And believe me as a kid this is what I was into.  My teacher wanted me reading Charlie and The Chocolate Factory which I thought was asinine and not for me.

Thus let us just put it mildly, my talents and intelligence went totally under the radar screen until I went to Stratford College on Zion Road. In this secondary college I learnt how to believe in myself.

I did an entry exam to Stratford College and the Principal actually told my dad that I would be an asset to the school.  I was never led to believe this in my junior school years like one single bit.

I was really lucky. I got to study intelligent poems that I really related to, by poets like Wilfred Owen and Siegfried Sassoon.  My teacher took note of all of this.  She told my dad at a parent teacher meeting that I was a very intelligent person, very aware of what was around me in my environment and that I had books in me.

I have never looked back since that time.  Just kept moving on and now I got my first book out and I am happy with that.


How many books have you written? 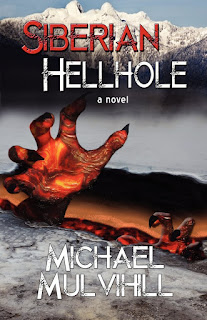 Tell us about Siberian Hellhole.

This novel is set post Glasnost at the time of Perestroika in Russia.  Tobias has to leave Moscow, there is no work he can hardly feed himself.  He finds work in Siberia.  But instead of finding peace from solitariness he finds a land that is ravaged with demons from Hell which are lurking under the ground that he is protecting and waiting to take over the entirety of Siberia and the world.


Do you enjoy creating horror fiction in particular?

Yes I love writing horror fiction because I seem to be able to release some unconscious energy onto the page when I write.  I mean some people have said that horror fiction helps people to prepare for death and to acknowledge and become aware of the shadow or dark side of their own personality.  Which is an interesting concept if you think about it, I guess you could say at some level I find writing therapeutic. I love writing horror fiction because I find I can place variety of elements of life into it.

What do you feel is your greatest accomplishment as an artist so far?

When Stuart Anderson of The Fifth Dimension wrote that Siberian Hellhole is an intelligent horror story I was so delighted.  He was the first to review my book.

Then I panicked and thought no one else would review my work until Maria Perry Mohan recently gave my book an excellent review.

“I made the mistake of starting to read this on my terrace in the moonlight by the light of my kindle. Bad mistake, I was so un-nerved by the narrative and the night birds that I had to stop and crawl into bed beside my slumbering husband. Not many books create an atmosphere like that for me”

What can I say?

I mean this is the best compliment that can be possibly written about a horror novel and I was delighted to read it.

Dracula, Let The Right One In, The Metamorphosis, The Master And Margerita (which has a surrealist horror elements in it) Edgar Allan Poes Tales of Mystery and Imagination, Hannibal, The Butcher Boy (as far as I can see this is pure surrealist horror about the unhinging of the mind).
I loved and still do, Lorenzo Caracaterras Sleepers and A Safe Place, Diary of Anne Frank, Thomas Keneallys Shindlers Ark which to me had such morose scenes of true life horror.  I guess I define horror books in a broader way than most.

Francis Ford Cappolas version of Dracula, 1994, Shadow of The Vampire 2000, Pit and The Pendulam (1961), Them, Kidnapped, I am Legend, The Original Vampire Killer, The Addiction, The Lost Boys, Fright Night, The Crow, Funny Games, The Others.


Why do you think old school horror fiction remains popular?

I love intelligent fiction.  I just have not been seduced by the likes of King and Koontz, I love reading true old ghost stories, castles and atmospheric stuff about poltergeists and exorcisms, so there is just this part of me that likes things done old school anyway.

I am not sure if I can give anything but an unbiased answer to this question.  For me old school horror films are way better than the stuff of now never mind  what was written down on paper when the likes of Poe and Stoker was around versus nowadays.  I like my vampires dangerous threatening and malevolent.  Not sex symbols that are waiting to come out of the closet.

In the next edition of Blackpetals.net I will have a very disturbing horror story in it which will feature a vampire horde invading the house of a single female.  This is an example of intense short horror fiction.
My next novel will feature a Dublin Vampire Lucis Diaboli who believes he is externally showing signs of aging and feels he needs to get his fangs into the blood of an aristocrat in order to continue looking youthful.

I am a person who has really just begun to tap into my abilities as a writer.  Siberian Hellhole is the best novel I have written thus far because it is the only novel I have published so far.  I really feel there are a lot of dark fiction, horror and surrealism stories left in me.  I hope to have a long life so I can write as many books as I think are in me.  So longevity is something I wish to achieve.

Fantastic latest review of the novel
http://ablogofhorror.com/2013/05/23/siberian-hellhole-review/
Posted by JD at 09:34