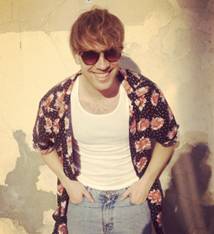 On the eve of the UK TV premiere of ELFIE HOPKINS, on Horror Channel, director Ryan Andrews talks about a thwarted career as a Vampire Hunter, working with the Winstones and his new ‘raw’ film,

Q: Did you know from a young age that you wanted to be a director?

RA: From a young age I actually wanted to be a vampire hunter. I was obsessed. I carried a briefcase with wooden stacks and crosses, I was a bad ass 7 year old obsessed with horror. My VHS collection was insane from the age of about five. My grandfather thought horror was a good way for me to see the difference between good and evil. As for directing. I decided to direct after getting into video art.  My work became more narrative and I decided to take the next step and go to film school. At first my aim was to make films like Matthew Barney, but that soon changed when I realised I wanted to tell stories.

Q: Do you have a favourite director?

RA: I love different directors for different things.  I love Wes Craven for keeping me awake for the early part of my teens. Tony Scott and QT for True Romance, my bible to relationships, Harmony Korine for not giving a fuck and Riddley Scott for showing how important it is to create a world within your movie (Alien).

Q: Where did the idea for Elfie Hopkins come from?

RA: Well, I was fresh out of film school and sick of saying I was a director when I hadn't yet done a film. I thought the only way I'm going to learn to direct features is to get out there and shoot something. I based the script on my youth as a wanna be vampire hunter. Then I got mu co-writer Riyad to write the script with me as I'm not really a script writer.

Q: The casting is quite something, how did you get Jaime and Ray Winstone on board?

RA: I met Jaime years ago when I was a camera assistant. We became friends. She loved this short I directed called Fangula and we made a deal that one day we would do a feature movie.  I met Ray through Michael Wiggs Ray's agent. We made a short film together called Jerusalem about the artist William Blake. We became friends so it was natural for him to be in my movie. As actors, they are so similar it's surreal.

Q: Were you nervous as this is your first feature film?

RA: Yes, of course but you have to start somewhere. I just got on with it. It was a massive learning curve. It was a very small budget with limited shooting time. We only got through it because I had such amazing support from my crew, family and friends. It's set me up with so much experience for the next film.

Q: You must be pleased that it’s getting its UK TV premiere on the Horror Channel?

RA: As a huge horror fan and horror channel fan it's like a dream come true.  For my first movie to be out there for horror fans to actually see is really exciting.

Q:  So what are you working on at the moment?

RA: I'm actually working on a really raw new feature film.  It's super exciting, based around the dark side of youth culture in London . It follows one girl on a macabre journey set over one night.