EMILY BOOTH TO PRODUCE AND STAR IN “SELKIE” 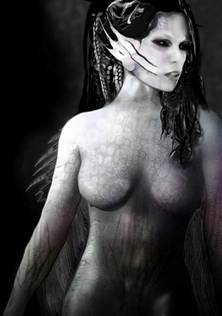 Horror Channel presenter and actress Emily Booth steps behind the lens to make her first short film – SELKIE, a dark revenge fairytale, in which she also stars in the title role - as a beautiful and vengeful sea creature.

The plot, based on an ancient Celtic myth, sees Selkie enslaved to a drunken fisherman when he finds her shedded skin on the beach. Refusing to return her skin to her, the Selkie law of nature means she is now bound to him as his 'land wife' unable to return to her true form, and to the sea. Until one day, many years later, when she exacts her revenge and finally is able to transform back into her true form.

Emily assembled her own team for the project including concept artist Danny McMahon (who came up with the original drawings of the Selkie creature) and SFX artist Robbie Drake (Nightbreed, The Seasoning House)

Emily said today: “My aim is to create something truly unique and memorable, a dark and haunting adult fairytale, with a spectacular creature transformation sequence, all shot in Medieval locations. Yes it’s a challenge and will not be cheap which is why I’m using the innovative crowd funding site Kickstarter.”
….
To find out more and invest go to:
http://www.kickstarter.com/projects/569693974/selkie-a-haunting-adult-fairytale-inspired-by-celt
Posted by JD at 10:22