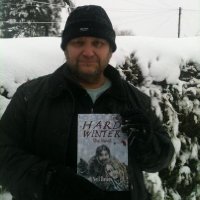 
Tell us how you became involved in writing fiction.

I have honestly been writing fiction for as long as I can remember. Somewhere in the attic I still have an early piece of fan fiction from when I was about 10, based on the old TV series, Garrison's Gorillas. Lots of other scraps of stories up there too (including a Star Trek spoof). Hardly any were ever finished. When my parents bought me my very own Petite typewriter, I used to sit down at the bottom of the garden in the shed, typing away. I did have friends too, honest I did!


How many books have you written?

So far five novels, two horror, two science fiction and one that blurs the lines and mixes in dystopian and dark fantasy. I also have two short story collections with a mixture of horror and science fiction tales - mostly horror.


Tell us how you came up with ideas for books like A World Of Assassins and Raised In Evil.

The boring genesis of A World Of Assassins is that I wanted to write a story that said something about racism. The original story ideas were worked out back when we had apartheid in South Africa. What I didn't want to do was preach about it. The story had to be entertaining. In A World Of Assassins the whole Human Race is looked down on as an inferior species and as immigrants we are isolated in our own "sectors" within alien cities. I never said it was subtle! The rest? I love Science Fiction and Thrillers and wanted to write a mixture of the two.

I have also always loved horror (both films and fiction) and Raised In Evil (under its original uninspiring title of Black) was written by a very young me as an attempt to out-gross the books I'd read at the time (mostly Dennis Wheatley and Pan Books Of Horror). Put it this way, there are things in that early attempt that, when I came to rewrite it as Raised In Evil, I left out as too extreme. Even so, I think Raised In Evil is one of my most graphic books in terms of horror and it is intended to be so. It is all the things I love about horror set in a landscape I know well - it's where I live.

Other origins are even simpler. Welcome Home started because I wanted to write a haunted house story for my wife (she likes haunted houses) but somehow a serial killer got in there and took it over so the haunted house is now only a relatively minor part of the story. The Szuiltan Alliance is my very simplistic version of a Dune type saga, because I love Dune (the books - not so much the film and TV versions). Hard Winter started life because I wanted to write something set in an extreme environment, and I chose cold. Everything else that finds its way into those books is somehow drifting around in my head - I don't quite know where it comes from.


Do you enjoy creating horror fiction in particular?

I must admit that I do. Even in my science fiction I don't seem to be able to avoid elements of horror. One of the earliest rejection letters I got, which was for a very early version of the science fiction story that would later become The Szuiltan Alliance, was a standard printed rejection but the editor had hand-written on it that it was "extremely well written" and had I considered "writing horror as your style would suite that genre well". I love the way that horror allows you to mix the everyday and familiar with the sudden descent into the outrageous, horrific and extreme, whether it be supernatural or purely human. I like to set stories in areas I know but push my imagination, and horror allows me to do that even more than science fiction I think.

I think it would have to be the "making of" Hard Winter: The Novel. Just the fact that I wrote a short story (Hard Winter, published by the Canadian publisher Eternal Press) that enough people reviewed or contacted me about, wanting to know what happened next, I actually sat down and wrote the novel in reply. Also the fact that I had a US publisher, Omnium Gatherum, who had asked for first refusal on that novel, should it ever be written. It was the first time I had written something by "popular" demand, and the first time I had a publisher actually waiting for it to be delivered. To a large extent I felt this validated me as a writer of (hopefully) popular fiction.


If your books were movies they would be rated NC-17. There are warnings of Adult Content on Smashwords. Did you feel like the violence was a necessary part of the story or could you have curtailed it a bit?

If I had curtailed the violence they wouldn't have been my books. By that I mean that I write the books I want to write. Nothing is in those books because someone else said it had to be and nothing is left out because someone else might be offended. They are my books. If I am lucky enough that other people like them too then I am extremely happy, but they are, at their simplest, my books. I feel everything in them is justified, either in terms of a character or the plot, and its there because I think it should be there. I am a great believer in certification, because people should be aware of what type of thing they are about to watch or read, but I am vehemently against censorship. Once something is classified as being suitable for adults only then that is enough, you shouldn't go cutting bits out after you've already said only adults can watch or read it. As adults, we are responsible for what we watch or read, not some government or private body of people. Equally as parents we have to take a large responsibility for what our children watch and read. Certification can only ever be a guide. Final responsibility lies with us. But I think we're getting onto another subject here (and one I habitually come back to… at length!)

Name some of your favorite horror films.


Why do you think horror fiction remains popular?

I think we all (or most of us) like to be frightened while still being safe in our own homes. Sometimes we like to be a little grossed out too - there's fun in that. Horror fiction is fairy tales for grown ups. It means we can still enjoy stories about monsters and ghosts and goblins without people thinking we're reading kids books.

In the self publishing world, I'm busy getting one of those "long" short stories ready to put out on kindle. It's called The Ant Man and is heavily influenced by the old black and white 'B' Movies I still love to watch (thanks to cheap dvd box sets!).

In the world of other publishers, I have a novella with a publisher at the moment and I'm just waiting for final approval on that. Can't tell you much more at this stage but I can say it's my first foray into the world of zombies - my take on them anyway.

I've also spent some time lately editing and revising some old stories written by my Dad. They range in date from 1949 to 1955, so I mean old! It's been fun because they're mostly outside of my usual genres. There's a couple of murder mysteries, an adventure story and a hard-boiled detective tale. Oh, and there is one horror story too - runs in the blood! They're all short so I will be putting them together into one book.

Short stories - a few out there doing the rounds at the moment, and one has been accepted for an anthology being produced by Third Flatiron Publishing sometime in September. More details nearer the time.

Works In Progress: several on the go, there's the second book in The Szuiltan Trilogy called Liberation Of Worlds, and a horror novel called (at the moment) The Village Witch, another science fiction one called (for now anyway) The Wizards Of Yradion and various other ideas floating around. Always plenty to be working on.

I was born in 1959 and it's all been downhill since then. I write horror and science fiction and try to write stories that I, as a reader, would want to read. I have no desire to be remembered as a great literary figure, but I would like to be remembered as a good story teller. The bad news is that, however much you might beg, I'm not going to stop writing. It's what I do. It's who I am.