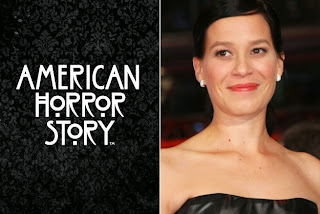 Q:  You get to be something that most actors don't get to be.  You're a bomb of a character.  How would you fit in?  How will you upset the universe?

A: I come in there because I am a housewife and I beat up two men in a bar.  I claim to be Anne Frank, which millions and millions of schoolchildren have read the book, we all assume is dead but do we really know.  I seem to have proof that what I say is true.  So at first nobody believes me but the more proof I bring the more people are investigating if what I say is true.  Not only that, there's somebody in there who works in this time that I seem to recognize from Auschwitz concentration camp.  So I'm pointing fingers at people too.

Q: How will this affect the characters running the asylum?

A: You definitely will but that is already set in motion isn't it?  Like you know, there's not going to be the moment where you're like oh my God, I thought this person was good.  I don't know if, after seeing two episodes, I don't know if you can say that about any character.  I'm just shedding light on certain people that will be under a lot of pressure and do horrible things because of.  And then I kind of vanish again into the fog.

Q: What a treat for an actor.  What was the appeal of being on a show like this?

A:  What I like about season one was the texture of it.  I like that I was creeped out by that title sequence and still am.  When I watch the title sequence I hear this mind-boggling music.  You know immediately that this is created by someone who knows the psychology of nightmares, who knows the texture, who knows the feel, and for an actor, anyone involved you need to physically place yourself in that and you become easily part of something.  That already has its tone set.  It's a very luxurious situation, the sets, everything it makes you so uncomfortable.  It's already a creation.  You just step on there and say your lines and it's helping the performance incredibly.

Q: There's a line in the second episode where one of the characters says “times may have changed but the nature of evil happened”.  We are living in a time of great chaos.  Is that what you think fuels people's fascination with watching shows like this?

A: The human mind is so twisted.  I sometimes think that the pure, like us watching the show and being intrigued by what's going on by bloody face or this person or that person being tortured, even in the safe environment of our home, just the fact that we can't wait to see this again and again and again the next week and the following almost proves the point how twisted and sick we are.

Q: It takes a certain actor to be able to stand up to the formidable challenge of people like James Cromwell and Jessica Lange.  You will be in the midst of these two powerhouses.  What was it like being up against these two people?

A: I was scared.  My first day of shooting was with Jessica Lange and I had 14 pages of text.  I couldn't sleep.  I was really nervous.  I admire her work.  She's obviously an amazing actress that has sustained and is just there and has just won an Emmy.  I wanted her respect.  I wanted to be good with her.  I really wanted us to achieve something good together but I was like how am I going to do this?  She has a very focused presence.  She made me part of her energy.  She is really responsible.  She looks out for you and she wants you to be good.  She was totally there for me and it was an awesome day.  I forgot my lines maybe twice, which is a good ratio.  It was great and it was definitely because of her honestly, yeah.

Q: It's interesting that they took on a real-life figure to put into this asylum.  Does the show do anything to disturb her legacy?

A: I can only say that I never had those concerns because my character had postpartum depression and basically overcompensates and identifies with the second world war and Jewish victims of the Holocaust.  At some point she took over the persona of Anne Frank because it's part of schizophrenia.  She really becomes Anne Frank.  She's fighting and she is very proud and she's fighting for justice.  Anne Frank is not really, if she were alive to be honest with you, she might be like that.  That was always my way of thinking.  I was like well, if she had survived she would be my age in the 60s and what would she be like?  That's kind of an interesting mind game.  It's more a tribute I think to the magic of moviemaking.  We can make Anne Frank come alive.