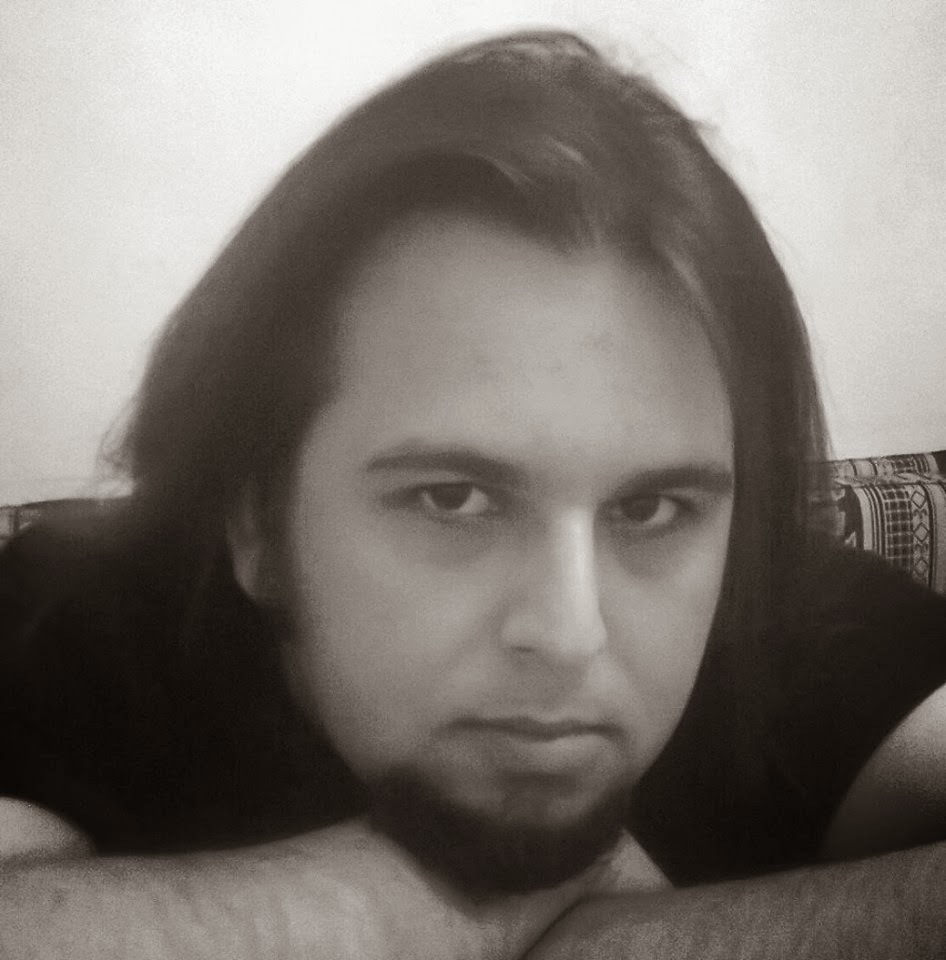 Robert Friedrich, originally born in Slovakia, started his writing career in Egypt, where he has been living since his 13th Birthday. He always had a vivid imagination, but the courage to show it to the world came much later. It was't easy, and took some pain, guts and ton of misfortune to arrive to this point. After a time of aversion and a path of unexpected circumstances he harnessed everything within him and stepped up to do things which he really wanted, liked and enjoyed.

He is writing in a different range of formats, from lyrics, flash stories, and short stories and Novellas. Even though the horror genre, which is about the long lasting fight between good and evil, Robert took it to an entirely new level. Adding many psychological characteristics, open ends, confusing twists and new settings. All of which slowly developed as a new paradigm Sci-fi/Horror/Drama; enclosing also urgent issues and happenings within the life of individuals as well as humankind.
His approach can surely change the perspective of readers, not only widen but also illuminate the possibilities and ways. Illuminate them with Darkness unlike found in any other Fiction genre.

Besides writing, Robert also enjoys metal music, movies, and games. He builds his encyclopedic information bank in this reference and uses his experiences from a wide range of activities which he had to go through; multicultural behavior, stress control, diving, translations, marketing, hotel management etc. Robert also creates his own covers and trailers. He speaks English, German and a bit of Arabic, besides his native language Slovak.


Welcome to Masters of Horror Rob, it is a pleasure to welcome you here and get to know you a bit better.

1. As I mentioned in the introduction you are originally from Slovakia but now you are living in and writing in Egypt, how did you end up moving from Slovakia to Egypt?

Well, Jon, the reason is fairly simple. Back in 2004 we moved here, me and my mother, because she got married to a new man, an Egyptian which we met on our 2003 vacation. Obviously at that age (I was 13) there was not much choice for me, either stay or move. I decided to take the step forward and moved here.

To make it clear, I’m not planning to stay here though; I lived here for quite long enough.  I decided to relocate back to Slovakia, to my city, and to continue my writing from there. My move back to Slovakia should by all accounts happen by summer.


2. How did your interest in writing first manifest and why did you end up writing Horror and Sci fi?

The first, solid manifestation can be traced back to 2004/2005. That is when I came up with the first, original concept of a story, complete from start to finish. Interestingly enough, that manifestation is coming to life in my new Novella; Seed of Evil, which will be released quite soon. However, the writing itself did not come until 2013, but this and many other concepts were already pilling up year after year.

As for the genre itself, from a very young age I was a big fan of Sci-fi Horror. It started when I was about 6 with Alien 3, Species, Total Recall, and Carnosaurus. These genres, especially mixed, redefine and take the stories to completely new levels - unbound by limitations and censorship. It was only a matter of time when the first concept story and my urge to write would meet in a genre I love and am fascinated with.

3. Who would you say has most inspired your growing up with regards to your writing, and is there anyone you really consider to be a hero of yours in this genre?

Difficult to say, it wasn’t just people who inspired me, it goes way beyond the ordinary stereotype of heroes. Let me name the three important factors of all.

One - Writers like John W. Campbell Jr. and his amazing and cult famous Novella: ‘Who Goes There’. Released back in 1938, it was a Sci-fi/Horror defining story and imagery. Everyone else probably knows it under its current form “The Thing”, everything shocking, you remember from the 1982 Movie, is in the book, and more.

Two - my uncle, even though he is not a writer, he is a VFX artist for movies. Some of which include Pandorum, Alien vs. Predator, Iron man 3, Gravity and many others. His unshakable determination and hard work in a field he loves, well it literally inspires me to follow my dreams even more.

Three - Metal music, because it does not back down and never gives up. It unites the outsiders and makes them strong, it pushes on the fact that each and every one of us should believe in one’s self, go after own dreams, and not to take shit from others.

It’s a medium that is always present, does not give in to criticism and mainstream views and shows that it is our uniqueness what makes us great. It takes flaws and helps turn them into something we can use for our advantage. It never backs down under pressure and stands tall, always.

All this and more helped me to grow into my goals and to write as I feel. In the end, everyone is a hero in following their own dreams.


4. For a writer you look quite young, how would you describe your success so far with regards to your writing, and where would you like to see yourself in 5 years, in 10 years and in 20 years time?

Writing is hard, and an ever changing and ever increasing experience. Frankly I think I only scratched the surface of what I can do.  The more I learn, experience, and achieve on the way, the more I incorporate in my future writings. Every book, every story is a step further. I learn about myself and also share it as a priceless personal experience with each and every single reader.

Well, since it took many years for me to finally start writing, I have collected many possible story ideas and will keep refining them and writing them down.  Besides that, as the future comes, I also want to write screenplays and take my visions to the medium of motion pictures. Where else my creativity and vividness will take me, I am not sure yet, but wherever it will be, I will keep doing it in way I love and enjoy.


5. What do you say is the worst criticism you have ever received in your writing and what did you take from that criticism and how did you use it to make yourself a better writer?

We all have to deal someway with criticism and/or rejections. The way I see things - there are 7 billion people out there, each one with a different opinion. You can never please everyone, but you can please yourself and fans.

First - for my first novella that it’s a non-linear story and it does not give everything right up on a silver platter.

The fun fact is, that it was the point of the novella. It’s a journey which unravels the further you go and also leaves things to your imagination.

Second - not to use too much of gruesome details so I would not offend people who might not take it well while reading it.

That only pushed me to continue doing it, horror and especially my writing is uncensored, just like life. There is no magic censorship button in life to hide you from the gruesome details. In the same way I take my writing, if someone thinks its unsettling or disturbing well that was the goal. You can always skip that part; no one forced you to read it. All my writings are adult-oriented and they will stay so. In this vein, if I managed to unsettle critics and cause them to be frightened and/or to experience a range of other emotions, then I know I have succeeded.


6. You also write poetry, how would you describe your poetry and what made you first decide to try and get your poetry published?

Variety.  As I mentioned before I gathered many concepts for stories, and had attempts at lyrical writing before, but never went with that end. My poetry is a part of me, and each one varies in form. Some are dark; some are inspired by life or even videogames. There are few funny ones, just to release that need for a little comic relief.

I decided to publish them when I was finishing my 2nd book, the short stories anthology that already had two sequels and will have more in the coming years. It reaped into a right moment to finally release my lyrics/poems for the world, too. Writing for me is a form of release, not just of stories but emotions and thoughts that have gathered up inside me, which gives space for new ideas to be formed once they are set free.


7. What can you tell me about future projects you have planned?

Right now my 6th book is nearing its release, Seed of Evil which I mentioned earlier. Besides this novella a few old and new ideas wait in line. Am also working on my 4th anthology of short stories, it will be a long one. I have already planned to pen the sequel to Seed of Evil. One newer idea is still in the process.

I just need to see how things will go after. I do have an order, in which I write my projects, but sometimes things change and I end up writing another one, while keeping the former idea in line. I can say; many new and unsettling ideas have seeded themselves within me and are literally begging to be released.

I look forward to new challenges.


8. If you could change one thing about your life and specifically your career as a writer so far, what would it be?

Everything that is in the past is there for a reason and I would never change anything. When it comes to the future, it’s all in my hands to mold and shape in my way. If there is something I want or would want to change, be sure I am already working toward that goal.  For example I am working on moving out of Egypt. Nothing comes out of the blue but being positive, determined and focused does help. Everything is always a work in progress in the end.


9. If you could meet one person living or dead that you think could help you with your horror writing who would it be and why?

Very complicated question, since there are many people I would like to meet. Right now though, I can’t think of any “one” particular person I would wish to meet.


10. I would like to finish off with quick fire questions.