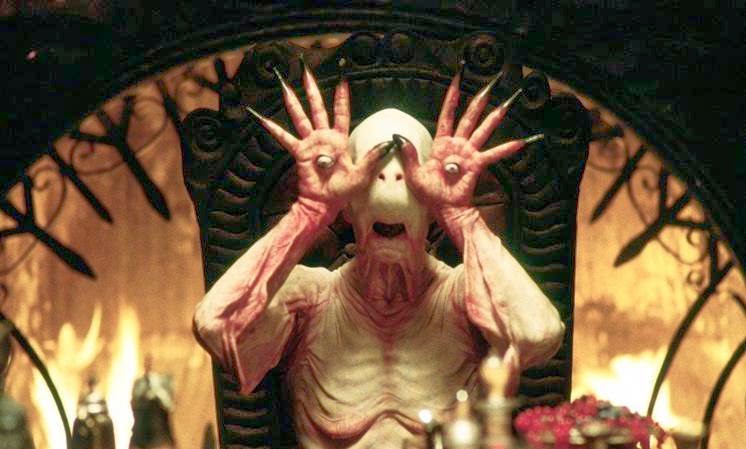 Set in 1944, at the end of the Spanish Civil War, Carmen (Ariadna Gil) moves with her young daughter Ofelia (Ivana Baquero) into the country after remarrying brutal Captain Vidal (Sergi Lopez). Finding her harsh new life hard to bear, Ofelia seeks refuge in a mysterious maze next to the house. There a magical faun (Hellboy’s Doug Jones) reveals she is the long lost princess of an enchanted kingdom and to discover the truth about herself she must accomplish three perilous tasks nothing has prepared her to face. These mirror her soul-destroying existence helping her cope with the perversions of innocence Fascism represents in this ravishingly presented pitch-black fable for adults. 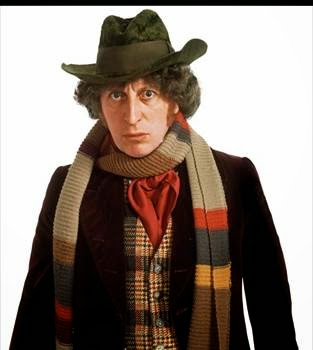 Tom Baker says he’s thrilled that the classic Doctor Who series is to be screened on the Horror Channel.

“Horror is my very favourite genre,” he said today, “so I am thrilled the classic Doctor Who series have been picked up by the Horror Channel.
There was clearly a darker edge to my storylines, which I think brought a new dimension to the series.  I remember hearing of the series scaring children – I wonder how the audience will react to the series today, all grown up.

He added: “The Horror of Fang Rock’ is one of my favourite stories so I’m looking forward to that one!"

Horror Channel has completed a deal with BBC Worldwide to broadcast 30 stories from the Classic series which ran 1963 to 1989 featuring the first seven Doctors, starting with William Hartnell and concluding with Sylvester McCoy.

Launching on Fri 18 April (Good Friday) the season begins with the very first story ‘An Unearthly Child’, and then leads into a special WHO ON HORROR weekend - a classic marathon featuring one story from each of the Doctors across the Easter weekend.  There will then be weekday double-bills in daytime and evening slots with stories shown in chronological order starting on Easter Mon 21 April.

Email ThisBlogThis!Share to TwitterShare to FacebookShare to Pinterest
Labels: Doctor Who

Bio: Leslie S. Klinger is considered to be one of the world’s foremost authorities on those twin icons of the Victorian era, Sherlock Holmes and Dracula. He is the editor of the three-volume collection of the short stories and novels, The New Annotated Sherlock Holmes, published by W. W. Norton in 2004 and 2005, winner of the Edgar Award for Best Critical/Biographical Work and nominated for every other major award in the mystery genre. He is also the editor of The New Annotated Dracula (W.W. Norton 2008), which possesses a similar in-depth examination of Bram Stoker’s haunting classic and its historical context. When I was a student at Millersville University, I won an award for my paper on Dracula at The Student Research Conference. Years later, I never dreamed there could be such a definitive addition of the text of what is arguably the world's greatest horror novel. Leslie Klinger has given this to the world. We thank him for that and Masters of Horror U.K. thanks him for the time he took for this interview.

Tell us why you became so interested in Sherlock Holmes and Dracula.

When I was in law school, I received a gift of “The Annotated Sherlock Holmes” by William S. Baring-Gould. I was hooked! I was fascinated by the footnotes—by the discovery that there was a community of scholars interested in the Victorian age and Holmes in particular. Earlier, in college, I had read “Dracula” and loved it, but it didn’t really connect until I read Leonard Wolf’s “Annotated Dracula” in the 1970’s. These two editors showed me how much depth there was to be plumbed in these classic works.


How did you become interested in the scholarly side of gothic horror literature?

I always fantasized that someday, I might be the one who would update Baring-Gould’s work. I began to play around with it in the mid-1990’s, and after a year or two, I was mesmerized by the wealth of material to be explored. The 19th century is now so remote from us that it requires explanation. Detective and horror fiction of that time accurately mirrors the age, and so it is worth studying in detail.


Are you satisfied with the amount of literary academic research you have done?

There’s never enough time to do as much research as one would like. “Research rapture” is a common ailment of scholars. At some point, you have to stop the research and begin the communicating. Satisfied? Never!


Have you ever written any original short stories or fiction novels of your own?

I have one short story (Sherlockian) published; I tried my hand at a novel (hard-core s-f meets Victorian flavor), but it needs a lot of editing to be marketable. Fiction is hard work!

Baring-Gould and Wolf have already been mentioned. Another important influence is my “day job”—as a lawyer, I’m always marshalling the “evidence” to buttress my analysis of the “facts.” My best training for being a lawyer was my degree in English literature (which taught me to look for underlying themes and to write about them). My best training for being an annotator was my law degree, which taught me to observe very carefully and examine every aspect of the material.


What is it like to be a technical advisor on both Sherlock Holmes movies?

.As a technical advisor, you win some and lose some. Sometimes, the purity of the text needs to yield to what’s entertaining and, of course, to the producer’s vision of the film. I had plenty of victories, where I was able to convince the producers to hew closer to the original material, and the losses were all in the interest of enthralling the audience! One of my biggest thrills was to be allowed to write Holmes’s epitaph (for “Game of Shadows”): “He played the game for the game’s own sake.” It’s right there on the screen!


Were you disappointed in Holmes surviving what should have been a last fatal encounter with Processor Moriarty in the sequel?

It was no spoiler to discover that Holmes survived; anyone who had read “The Adventure of the Empty House” knew that. I thought that the film should have left Holmes’s survival ambiguous (though readers knew he was alive), rather than make it explicit, but this was an artistic judgment that was ultimately up to the producer and director. Holmes never died and so will never die!


Do you consider yourself a mentor to other artists or academics?
Tell us about your daily (or nightly) working routine.

I lecture frequently on Holmes and Dracula, to readers and writers alike. My mentoring efforts have been primarily to share my legal knowledge with other creators—to educate them about contracts and copyrights. My principal mantra as a teacher is “Find what you’re passionate about and write about it!”

I was deeply honored to receive the Edgar® for my New Annotated Sherlock Holmes: The Complete Short Stories. I always explain, however, that I stood on the shoulders of Baring-Gould’s work. I had three great advantages over Baring-Gould: (1) The Internet and its amazing depth of Victorian works (in GoogleBooks and elsewhere); (2) the Ronald B. De Waal bibliography of all things Sherlock Holmes (over 25,000 entries), published after Baring-Gould’s death; and (c) I got to start with the work of Baring-Gould! I spent 37 years reading about Holmes, and it was an incredible opportunity to be allowed to distill that reading into 3,000 footnotes! I’m immensely proud of every one of my books. A great highlight of my writing career was the amazing opportunity to study the manuscript of Dracula, owned by Paul Allen and seen (by 2007) by only one other scholar, who wrote nothing about it.

Reading and seeing horror stories gives us a chance to practice dealing with the horrors of daily life and exercise our control. With books and films, we can always shut the covers, close our eyes. We’d like to do that in real life too—that’s why films and books are so appealing!


Why do you think Shelley’s Frankenstein and Stoker’s Dracula have influenced society and writers so much?

The answer is obvious: Science fiction and horror fiction would not exist without those predecessors. They created the molds for virtually everything that followed. The mad scientist, science gone wrong, the invasion of the unknown, the plight of the innocent unaware of the strengths of their enemies—all of these are tropes from those brilliant books.


How did you feel when you won the Edgar Award?

I knew that the Sherlockian community would embrace the New Annotated Sherlock Holmes, but it was a shock and delight to learn that the mystery genre in general respected the material and my work. When I walked up on the stage to accept the award, all I could think was, “My god! That’s Lawrence Bloch handing me the award!” I was and still am deeply deeply honored to be part of the tradition of winners of the Edgars®.

Neil Gaiman and I are finishing up Annotated Sandman (vols. 3 and 4 will be out soon); New Annotated H. P. Lovecraft  will be out from Liveright in October 2014, and there’s proofing the galleys to be done. Laurie R. King and I are finishing up In the Company of Sherlock Holmes, another anthology of amazing stories by major writers not normally associated with Holmes. And I’ve just started working on my next book for Liveright, The New Annotated Frankenstein, to be published in Oct. 2017, just in time for the 200th anniversary of the book.


What advice can you give to new writers seeking publication?

Figure out what you’re passionate about and stick to it. Don’t let anyone tell you that you can’t write. All they can really tell you is that they don’t like your writing or they don’t want to publish it. If you’re doing your best—really, your best—then stick to it.

I’m a lawyer by day who found that he was passionate about writing. The skills came from the day job, but the passion came from my outside interests. I’ve been incredibly fortunate to have a totally supportive wife and family, and I’m lucky enough to have the economic freedom to write about what I care about, not what will sell well. Of course, publishers always want books that the public will buy, and that’s not so bad. I keep wondering whether I’ll live long enough to write all the books that I want to write—probably not, but I have no problem that when the Reaper comes a-calling, I’ll be saying, “Wait, I just need a little more time to finish my next few books!”

You can check out Leslie's website at
http://lesliesklinger.com
Posted by JD at 16:08