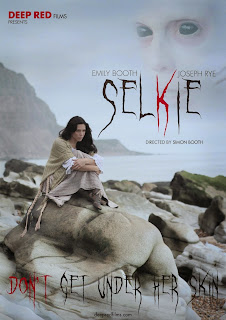 This is a first look at the poster artwork for the dark fairytale SELKIE, Emily Booth's stunning debut short film, in which the Horror Channel presenter takes on the producer, writer and lead actress roles.

SYNOPSIS:
When a fisherman (Joseph Rye) finds a treasured Selkie's skin on the beach a mysterious woman (Emily Booth) is summoned to his house, but after a lifetime of enslavement she determines to reclaim her true mythical identity. A haunting adult fairytale based on Celtic myth.

Emily assembled her own team for the project including concept artist Danny McMahon (who came up with the original drawings of the Selkie creature) and SFX artist Robbie Drake (Nightbreed, The Seasoning House). It is directed by her brother, Simon Booth.

Watch out for news of its World Premiere screening…
Posted by JD at 11:17