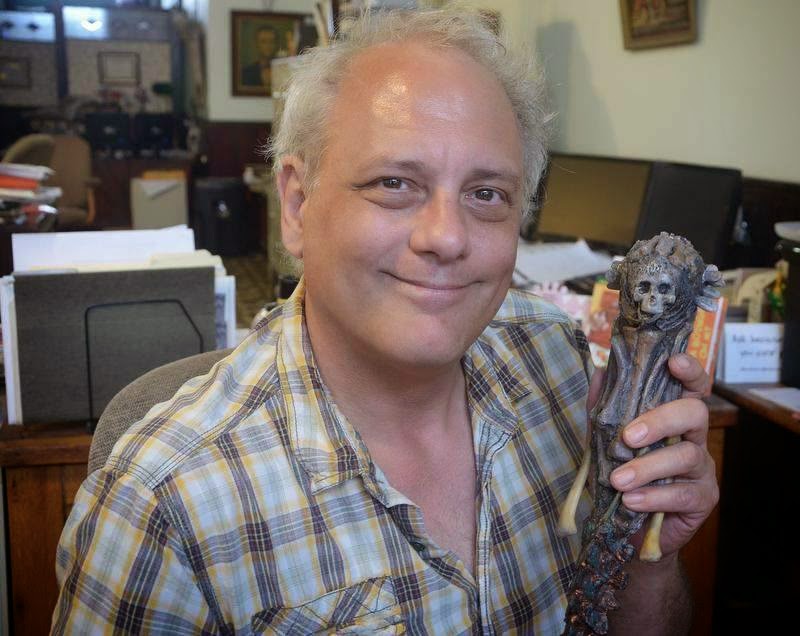 When I was a young teen, I saw the first EVIL DEAD movie and it scared the hell out of me. I equally enjoyed the sequels EVIL DEAD 2 and ARMY OF DARKNESS.

Tom Sullivan worked as a effects artist in makeup and stop motion animation in both EVIL DEAD sequels.
Tom is a lifelong fan of horror and fantasy movies and is very popular with art collectors seeking to purchase EVIL DEAD related art. It was fun to interview Tom about his past accomplishments and future plans in the horror field.

Tell us why you became so interested in the world of horror.

Because the world of horror became interested in me. Before Evil Dead I was a good, shy, Eagle Scout who never got into trouble, abhorred violence and the horror films I'd seen scared the crap out of me.
I wanted to make movies like Ray Harryhausen and with their sensibilities. Gore and horror was a self forbidden genre for me.   I didn't even want to see James Bond films until I was in High School because of the violence I thought  they might contain.  I eventually saw Thunderball and got it.

It wasn't until I met Bill Baetz and David Hurd who were putting together there H.P. Lovecraft inspired film called The Cry of Cthulhu that I actually started to read horror fiction.   For my first read, I thought Lovecraft was wild and a lot of fun.  The film, from my point of view was Lovecraft meets Harryhausen.  It was to be a live action/stop motion horror/adventure film using every practical and optical effects available. It would have been epic.

Evil Dead was a whole other animal.   I had to jump in and see all the horror films I could to figure out what the hell I was going to do.  Fortunately Sam Raimi insisted us Book of the Deaders' saw films at Drive Ins and learned all we could about what works and what doesn't .  Sam said and I believe him that you can learn more from a bad film than what you can steal from a good film.

The good stuff you steal (and Sam sure did) is recognizable by hardcore film fans. While the improvements you make on a failed idea have a germ of originality to it.

But horror films still scare the crap out of me.


Do you prefer watching horror films or reading horror novels?

I'd rather watch them.  I'm a film maker at heart.  I do love horror comics, especially EC, Creepy and EERIE from the good ol' days.

In art it was Steve Ditko and Frank Frazetta in that order.  I loved Spider-Man and discovered those comics first.

Ditko's figures were supremely animated and anatomically and proportionally correct for the most part.  An artist friend turned me onto Frazetta in High School and I've never been the same since.
Nowadays I love all artists over all times. 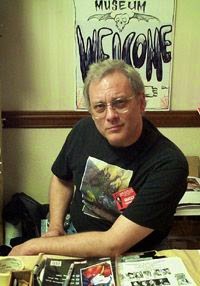 In film making, Willis O'Brien and Ray Harryhausen are my giants.  I saw King Kong when I was 5 and The 7Th Voyage of Sinbad when I was in the third grade.   I had to do this stuff.  I have a Mom who let me stay up late, even on school nights so I could see these on TV.    These films were miracles to me.


How did you become involved with THE EVIL DEAD?

My wife, Penny went to Michigan State University and we lived on campus.  One day I read about the MSU Creative Film Making Society having a screening so I went.  I met Sam and Ivan Raimi and Rob Tapert, the roommate of Ivan Raimi.  From there we hit it off and I showed my special effects reels and artwork to them.   Sam, being the resourceful film maker he is, kept a lookout for other's talents to broaden his palette.
And he put me to good use.  I did sound effects for his Super 8mm, full length feature, It's Murder as well as a flyer with a drawing I did.

Then came Within the Woods, Sam's horror film designed to impress investors to make a feature horror film.

I was called in to make a prop dagger and other items found in the grave of an Indian Medicine Man. I also designed and did the make up and gore effects.  It's a hard core horror film with supernatural elements.  A very good sketch for Evil Dead.


Who do you think THE EVIL DEAD series remains so popular with the fans?

Because of the kinetic action, comedy and gore Sam put in them.  He made us all look good.  I've found these days that fans are discovering the Evil Dead series backwards.  Army of Darkness has been the most shown because it's the least violent. A snip of the "F" bomb that Ash drops is gone and it's almost family friendly.  Most people are seeing Army of Darkness, telling there more worldly friends about it and then they seek out Evil Dead 1 and 2.  There is also the fact that the tones of each film is different than the others so everyone has their favorite.  I would guess it's usually the episode they saw first.

With the exception of The Shining about the only horror fiction I've read is Lovecraft.  I was drawn to The Shining because I'd heard Kubrick was making his film adaptation.    I was chomping at the bit at how he was going to do the moving animal shaped shrubs.  Spoiler alert.  He passed on that.

Robert Wise's The Haunting is the Citizen Kane of horror films.   It spells out the format for great horror. It sure influenced Sam Raimi.  I would recommend any horror director study that film as it does not have a drop of blood. No ghosts are seen but the audience is convinced they are there.  It's the classic demonstration of what writing, photography, art direction, sound, editing can do without the shock of gore or a reliance on special effects.  I guess I just dismissed my film career in special effects.

Spectacle of a dark side.  I think horror films are the most morality focused entertainments out there.  Films about vampires, ghost, exorcisms, monsters, serial killers etc. all reach out to the audience who fill in there own morality. They either identify with the victims or the monster.  The filmmakers usually plot that out but we know who is good and evil.   And being entertaining events, sometimes evil can be fun to watch.  Me, I like good stories and love it when my disbelief is suspended for a good movie or book.  And that is a huge challenge for the creators.


Do you think the growing trend of self-publishing is a good or bad thing?

Since I want to self-publish a couple of Coffee Table Art Books of my stuff, I'm going to go with good thing.
I should be finding out more about self publishing.   I figure if I put my pages from the Book of the Dead in there I'll sell a bunch of them.

I have put some of my talented friends to work producing replicas of my props from the Evil Dead films. Official Bookbinder of the Dead and Evil Dead Historian, Patrick Reese handstitches the Book of the Dead replicas.  His work is amazing and to make my sloppily designed book binding work, Pat has worked out an elaborate and difficult technique that makes his bindings durable and artistic.   Moldmaker of the Dead, the talented Steve Diruggiero casts the covers for the Books as well as the high quality resin Kandarian Daggers of the Dead.  He also makes Mini Books of the Dead from a sculpture I did of the Book of the Dead, 1/4 scale for one of Pat's Evil Dead 2 model figures.

Film maker and friend, Ryan Meade has made a DVD documentary about my life and career called INVALUABLE.  We had amazing help from my Evil Dead friends and the reviews are glowing.   It is available at:

Watch movies, think for yourself. Try thinking for yourself while you're watching a movie and eating popcorn at the same time.


Please in your own words write a paragraph about yourself and you work.

At the age of five years old Tom saw the original King Kong and his genetic structure was changed forever. After verifying with his Mother that Kong was made in the United States he announced his intention to be a film maker.

Art and film have occupied his time ever since and in 1979 Tom began work on Sam Raimi’s The Evil Dead.  To everybody’s surprise the film eventually became a cult classic    and Tom worked on Evil Dead 2: Dead by Dawn and the Army of Darkness. Tom Also was a sculpturer on Chris Walas’s The Fly Part 2.

After The Fly experience Tom returned to his home in Marshall, Michigan and returned to his career in Illustration. He created paintings and drawings for role playing game books based on the writings of H. P. Lovecraft for Chaosium Inc.

Since then Tom has been acting in films and The Dread reunited him with his Evil Dead comrade Ellen Sandweiss.  Tom also helped out with the effects rigging the death scene for Ellen’s character.