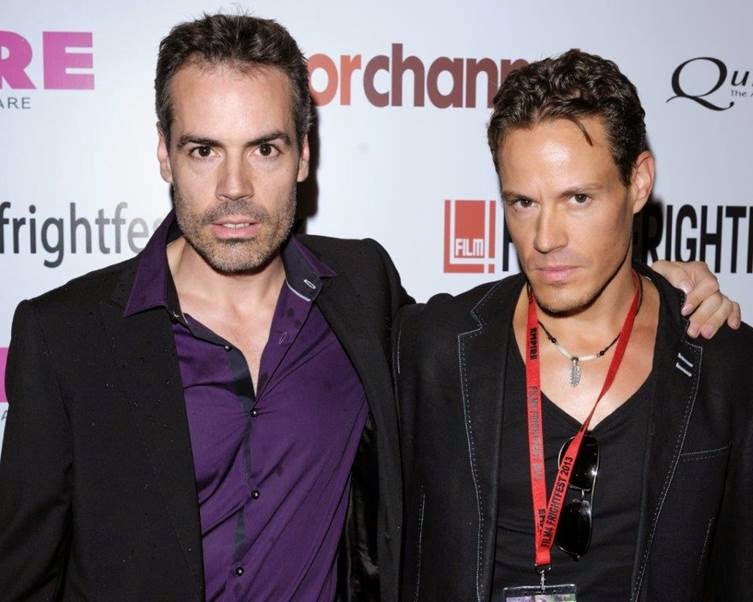 Ahead of the Horror Channel’s UK TV premiere of the acclaimed THE DEAD, on Sat 27 Sept@ 22:50, the Ford Brothers relive the drama of the malaria-stricken shoot in Africa, revealing the budget for the first time, and talk of revenge in their next movies!

How do you two write? For example, does one pace the floor whilst the other types?
Jon: Ha that's funny! You hit the nail on the head! Normally you will find Howard frantically writing away while I pace the room acting out the scenarios and shouting the lines like some demented theatre actor on steroids. The writing stage is one phase of the project where we work together very well. We are almost never in conflict with each other, each jumping in where the other got to in a particular scene but also bringing together our differing perspectives and weaving them together. We can't always say the same for the actual shoot, but on The Dead there was normally some life threatening situation taking place, which does tend to add a bit of additional pressure.
Where did the idea for The Dead come from and why set it in a foreign location?
Howard: Jon had started writing script for The Dead, in the mid to late 1980s but we didn't really push forward and finish the script until about 20 years later shortly before shooting the film. So in essence it is genuinely and old school zombie movie that just took a lot longer to reach the screen.
It was originally going to be shot in Morocco or somewhere like that but for those who don't know The Ford brothers shoot TV commercials in between films. Anyway, while we were out on location in West Africa we came across places of unbelievable beauty and danger in equal measure. We realised the opportunities of setting this film in a place where no one has ever been or seen before, where there are no safe places to hide in or lock down, where survival is as dangerous as the zombies themselves. Also parallels can be drawn with starvation poverty and events like the Rwandan massacres, while investigating how other religions and cultures would react to such a pandemic.. That was when we realised we could make something really special and different.
The shoot for The Dead has been well documented and is famous for what went wrong as well as what went right. What is the most enduring memory you have form the making of it?
Jon: Yes the shoot itself has become quite famous for all the problems, but for me the more pleasant enduring memory is the driving. Even though I had contracted malaria and had what seemed like endless bouts of food poisoning and other tropical illnesses, so had lost about a third of my body weight. In fact I didn't know if I would leave this place alive or not. Still as I drove across Ghana and Burkina Faso I will never forget the vast beauty of almost everywhere you look, words or even pictures cannot describe how stunning those places actually are. I though to myself if I die now, It was still nice to have seen such beauty.

Howard: It's funny as sometimes a film can be great, only because of the script and not because of the director, yet that film still inspired you. I think as filmmakers you are more able to see if it's the material or the director that's good. On the flip side of that, a bad director can kill a great script just as easily. Knowing how hard it is to make a film, even one set in a room, we have great respect for anyone who actually gets one made. Even bad films are hard to make!
Which do you prefer running zombies or walking ones?
Jon: Running or walking zombies? Yes we get asked that quite a lot. We prefer slow but actually like both. They are so different that you almost can't compare the two. Running zombies are action orientated and the scene will almost only ever be an action scene. With slow zombies you can build up a lot of suspense and tension which is ultimately more satisfying. I think the younger audience like the fast zombies as it gives instant gratification but later in life will grow to appreciate the slower ones. I suppose the sexual equivalent would be fast zombies cut straight to the orgasm while slow zombies ultimately build up to greater heights with plenty of foreplay.!
So what are you both working on at the moment?
Jon: I’ve written a revenge script that will shock and possibly offend in equal measure. It should be going into production within the year. The Dead was written and made because we wanted to see the film and the revenge movie has been written with the same philosophy. After watching film after film and being constantly unsatisfied you realise that sometimes if you want it done the way you like you have to do it yourself.
Howard: I’ve written a brutal thriller called ‘Never Let Go’ about a woman stopping at nothing to find her abducted child whilst on holiday in an unfamiliar location. I start shooting mid-September in Morocco, Spain and the States.
Jon: Hopefully whatever we do we can hit people in the heart and we will be supporting each other in these ventures and come together for other Ford Brothers Films too.
TV: Sky 319 / Virgin 149 / Freesat 138
www.horrorchannel.co.uk | twitter.com/horror_channel
Posted by JD at 15:19