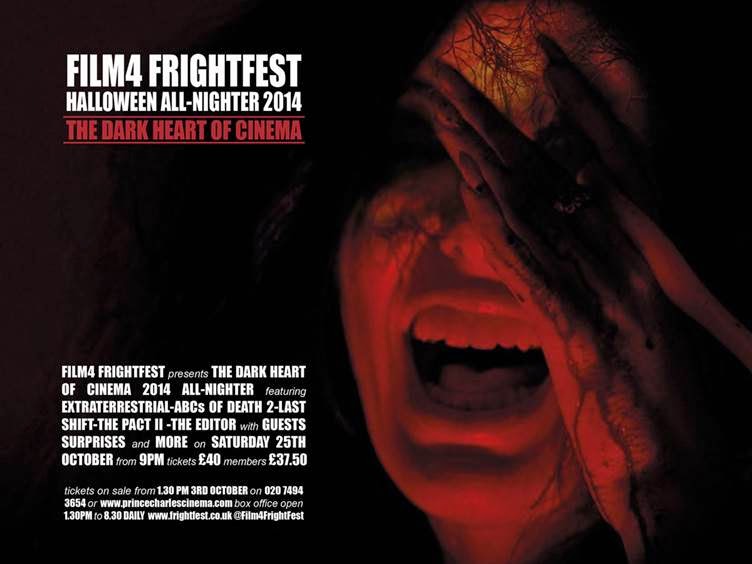 The FrightFest All-Nighter 14 returns to its spiritual home, The Prince Charles Cinema, on Saturday October 25, with five killer titles, including the world premiere of Anthony DiBlasi’s LAST SHIFT.

We kick off with a special preview of The Vicious Brothers EXTRATERRESTRIAL, a fine blend of ‘Close Encounters’ and ‘Communion’ with some of the most extraordinary special effects and camerawork you’ll see in 2015. Next up, THE ABCs OF DEATH 2, needs no introduction. The first was a huge draw at FrightFest Glasgow and now we can scream along to 26 more deaths by 26 handpicked filmmakers. This is followed by the world premiere of Anthony DiBlasi’s demonic horror LAST SHIFT, which had to be dropped from the August line-up because of altered release and completion dates as did our next attraction - the highly anticipated sequel THE PACT II, which has its UK premiere. And Giallo fans will not want to miss our last presentation - the ‘Airplane’ of the Italian thriller genre in the sublime Astron-6 homage THE EDITOR.

Guests attending include The Vicious Brothers, Anthony DiBlasi and Andy Nyman, So, be sure to be part of our terror tribe for the night-ride of your lives

Horror fans around the country can join in the fearsome fun on Saturday 1 November, when the event travels to the GFT Glasgow and the Edinburgh Cameo. On Friday Oct 31, the event hits the Watershed Bristol.

Five teenagers party in a remote cabin in the woods unaware the region has become a hot bed of bizarre events, military activity and space invader sightings. Then a UFO crashes in the forest and driven by curiosity they decide to investigate. This ambitious second feature from The Vicious Brothers is a wonderfully effective sci-fi fantasy; a close encounter of the shocking kind, which delivers thrills and terror in a surprising special effects package

Get ready to learn your ABC's again with 26 new directors and 26 new deaths. Some of the talent in the impressive mix include Vincenzo Natali (SPLICE), E.L. Katz (CHEAP THRILLS), the Soska Sisters (AMERICAN MARY), Aaron Keshales and Navot Papushado (BIG BAD WOLVES) and Larry Fessenden (HABIT). The follow-up to the most ambitious anthology film ever conceived, Provocative, shocking, funny and confrontational, it’s another global celebration of genre filmmaking. 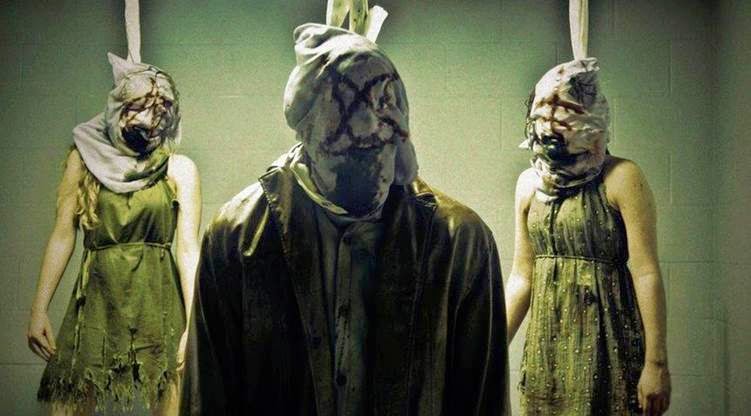 A rookie cop’s world is turned upside down when she comes face to face with Paymon, King of Hell. From Anthony DiBlasi, director of the past FrightFest presentations MISSIONARY, CASSADAGA and DREAD, comes a new frontier in fear. Officer Jessica Loren has the last shift at a transitioning police station, assigned to wait for a crew picking up bio-hazard waste from the armoury. But unbeknownst to her, cult leader John Michael Paymon has haunted the department ever since he committed suicide in captivity. Jessica is about to find out how dangerous he still is, now alone on the graveyard shift.
Director: Anthony DiBlasi. Cast: Juliana Harkavy, Natalie Victoria, J. LaRose, Joshua Mikel, Amber Watson. 90 mins. USA 2014.
04:30 THE PACT 11 (UK Premiere)

Surpassing the original movie by going into deeper psychological areas to stir up its scares, directors Patrick Horvath and Dallas Richard Hallam's latest episode in the Judas Killer saga once more unfolds a murder mystery linking two intriguing realities that skirt the fine line between being paranormal supernatural and entirely plausible. This time a trauma scene cleaner learns she's the adopted daughter of one of the maniac's past victims and now she's the target of a possible copycat murderer. How an FBI profiler and her cop boyfriend fit into the creepy picture make for neat twists and jolting shocks.
Directors: Dallas Richard Hallam, Patrick Horvath. Cast: Caity Lotz, Camilla Luddington, Scott Michael Foster, Patrick Fischler, Mark Steger. 96 mins.  US 2014.
06: 15  THE EDITOR  (Special Preview)

From Astron-6 (MANBORG and FATHER’S DAY), comes the AIRPLANE of Giallo. Editor Rey Ciso is on the verge of a nervous breakdown, the four wooden fingers on his right hand a reminder of the dangers of exhaustion. Then the lead actors from the Giallo he’s cutting turn up dead…A brilliant homage to 1970s’ Italian thrillers mixing crime with horror. Watch out for big hair, bad dubbing, inappropriate nudity, ‘hysterical blindness’ and a terrific Claudio Simonetti soundtrack.
Directors: Adam Brooks, Matthew Kennedy. Cast: Adam Brooks, Matthew Kennedy, Paz de la Huerta, Udo Kier, Laurence R. Harvey. 106 mins.  Canada 2014.
Alan Jones, co-director, said today: “Thank you all for making our August Bank Holiday event so wildly successful – the reviews were the best ever and our move to the Vue, Leicester Square, couldn’t have been better received. So we felt it was now an appropriate time to celebrate our roots and the interactive community that makes FrightFest unique amongst global genre festivals.The Prince Charles Cinema is where it all began 15 years ago and this Halloween you can join us for an intimate trip down memory lane and an ultimate shock around the clock experience”.
Passes for the London event cost £40 and go on sale from Friday 3 October. To book go online http://www.princecharlescinema.com/events/events.php?seasonanchor=fr1ghtf3st
or call the Prince Charles Cinema on 0207 494 3654
Tickets can also be bought at the cinema
For details of regional screenings please visit www.frightfest.co.uk
Note that the regional venues may not be playing all of the titles screening at the London event so please check local listings
Posted by JD at 13:59