Competition: Win Odysseus - Voyage to the Underworld on DVD 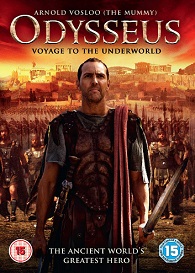 Odysseus - Voyage to the Underworld is released on DVD on August 31st, and to celebrate we have a great competition for you and 3 copies to win on DVD

Synopsis:
Troy has been defeated and Odysseus has begun his 10 year journey to return home to Ithaca. Accompanying Odysseus and his small team is the poet Homer, who is acting as the scribe and recording Odysseus' adventures as they travel along. The story about to unfold is so horrifying that Homer decided to leave it out of his Odyssey.

During their travels, they become lost in a deep fog and encounter horrific winged creatures that kill several men and drink their blood. In disarray, the crew lands at the Isle of the Mists, a terrible place where death is in the very air.

Eventually, they become imprisoned by Persephone, Queen of the Underworld, who was banished to the Isle of the Mists and sealed there by the Hellfire. Now the men must find a way of killing her and escape the island before she is freed to enslave humanity.

Win This:
Odysseus - Voyage to the Underworld [DVD]

Who is the director of Odysseus - Voyage to the Underworld?

To enter Email us on competition@mastersofhorror.co.uk with your answer, along with your name and address.

Winners will be chosen randomly and will be informed via email.
Posted by JD at 17:07