A totally shocking threequel, a haunted house of horrors, demonic possession, claustrophobic tank terror, a head-spinning brutal thriller and a surprise movie…it can only be the Film4 FrightFest Halloween event, which is back at the Prince Charles Cinema on Saturday 24 Oct with six brand new movies, including two World premieres, a European and two UK premieres.

This year’s Shockathon kicks off at 11am with the surprise movies which guarantees a sci-fi cocktail of weird creatures, crude humour and hilarious action. Next up is the UK Premiere of THE VATICAN TAPES, a dynamic, unusual and thrilling exorcism shocker by Crank director Mark Neveldine. This is followed by the World Premiere of THE UNSPOKEN, a chill-orientated sinister ghost story with an insidious sting in its tale. Kicking of the evening with a massive jolt of brutal energy is the UK premiere of MOMENTUM, a break-neck, nerve-shredding violent thriller starring a stand-out Olga Kurylenko & James Purefoy. Our second World Premiere is BELLY OF THE BULLDOG, directed by Nick Gillespie, whose past short films have been shown at FrightFest to great acclaim. We are delighted to welcome him back for his feature genre debut. To complete the line-up prepare yourselves for twists galore, horrific jolts and seat-edged suspense with the European Premiere of I SPIT ON YOUR GRAVE III: VENGEANCE IS MINE, which whole-heartedly retains the stunning shock impact of the entire controversial series.

Guests attending include MOMENTUM stars James Purefoy (The Following) and Olga Kurylenko (Quantum of Solace) and from BELLY OF THE BULLDOG, director Nick Giilespie plus key cast, to be announced later.

Plus, we’ll be showing two fantastic shorts, THE CHICKENING, a poultry-infused remix of The Shining, directed by Nick DenBoar & Davy Force and THE PACKAGE, starring Dan Palmer (Stalled) & Tom Gordon. And of course there will be intros, Q & A’s, give-aways and a few special surprises…

Alan Jones, co-director, said today: “Enough with the after dark jitters, caffeine fixes and trying to stay awake through the last movie. FrightFest is always ahead of the curve when it comes to redefining event experiences so here’s our latest innovation. All before midnight you’ll delight in fright with six of the must-see movies of the moment. Carefully selected by the FrightFest team of experts to show exactly where the genre is right now, these six nightmares before Christmas are tales of Halloween you just have to witness”.

Passes for the London event cost £45 and go on sale from Saturday 3 October. To book go online http://www.princecharlescinema.com/events/events.php?seasonanchor=zxy123
or call the Prince Charles Cinema on 0207 494 3654
Passes can also be bought at the cinema 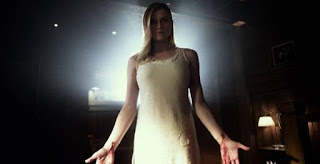 A concerned priest, two Vatican exorcists and the distraught father of a young girl battle to save her soul after she expresses increasingly erratic and strange behaviour. It soon becomes clear that Angela has been taken over by an ancient satanic force and that she must be quickly purged of evil. But what nobody knows is that the spiritual crusade is not just for Angela - it’s for the entire world as humanity knows it.

In 1997 the close-knit Anderson family vanished from their home without a trace. No bodies were ever found and no explanation satisfied curiosity. For 17 years the house has remained undisturbed...until now. This eerily expert frightener is further enlivened by terrific performances from ‘Suits’/’Arrow’ star Neal McDonough and SILENT HILL/THE TALL MAN/TIDELAND’s Jodelle Ferland.

With nowhere else to hide, a group of mercenaries and their prisoners take cover inside a long abandoned Bulldog tank. But, while they try to keep the forces outside at bay, the real enemy is already among them, locked inside the belly of the Bulldog. After collaborating closely with Ben Wheatley on FREE FIRE, HIGH-RISE, A FIELD IN ENGLAND and KILL LIST, Director Nick Gillespie makes his feature genre debut.

22:15 I SPIT ON YOUR GRAVE III: VENGEANCE IS MINE (European Premiere)

After her harrowing experiences in 2010, Jennifer Hills has taken the name Angela and is now working in an anonymous office job. Attending a rape support group to find closure, she meets feisty Maria Finch and they become firm friends. Then Maria suggests Angela join her in taking revenge by proxy on the abusers they hear about in their secret sessions…This superior sequel is genuinely surprising, consistently gripping, smartly written and brilliantly acted.