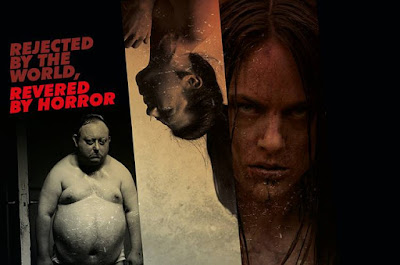 Horror Channel ushers in 2016 with the XTREME SEASON, a series of hard-hitting, controversial premieres on Saturday nights from 2nd to 30th of January.

The notorious Dutch director Tom Six, who made his name with the controversial franchise, said today: “I am really thrilled that the Horror Channel will connect its passionate and perverted viewers to my Human Centipedes!”

Other premieres in the season include the network premiere of Eli Roth’s brutal sequel HOSTEL PART II and the UK TV premiere of Scott Spiegel’s equally terror-filled HOSTEL PART III. There is also a repeat showing of the 2010 remake of the merciless I SPIT OF YOUR GRAVE.

There isn’t anything else quite like Dutch avant-garde artist Tom Six’s totally bizarre off-the-wall oddity. Surgeon Dr. Josef Heiter has a vision for mankind’s future existence. He wants to remove the kneecaps so humans have to exist on all fours and then surgically graft them mouth-to-anus to form a centipede chain. When two stranded female Americans arrive at his luxury home-cum-hospital looking for help, his long-gestating plan swiftly moves into chilling action with a shocking force. The First Sequence in Six’s trilogy features an all-consuming performance from German star Dieter Laser as the mad doctor.

Tom Six’s controversial sequel to THE HUMAN CENTIPEDE was initially banned by the BBFC but now fans of the first film are in for a stomach churning, seat squirming treat of the most nauseous kind in this first showing on UK TV. An obese, inarticulate, retarded mama's boy (played with magnificent evil relish by Laurence R. Harvey) is determined to recreate the experiment portrayed in The Human Centipede (First Sequence). He does this by abducting motorists from a multi-storey car park and taking them to a disused warehouse, where he attempts to join twelve of them together as a human centipede with one digestive system. Definitely not for the faint-hearted.

The Xtreme season continues with Eli Roth’s sequel to his notoriously successful Hostel, this time with Quentin Tarantino exec-producing. Again the action takes place in Slovakia and centres on the shadowy ‘Elite Hunting Club’. Beth (Lauren German), Lorna (Heather Matarazzo) and Whitney (Bijou Phillips), three young American women traveling abroad, decide to take a weekend excursion. Lured from their intended destination by a beautiful acquaintance (Vera Jordanova), the women anticipate a stay at a luxurious spa. Instead, they become pawns in a grisly game designed to entertain wealthy deviants from around the world.

Eli Roth steps back into a producer role for the third instalment of the Hostel franchise, receiving its UK TV premiere on Horror Channel. This time we’re in Vegas rather than Slovakia and it’s the turn of a group of men, in town to attend a bachelor party, to feel the brutal force of the Elite Hunting Club. Enticed by two prostitutes to join them at a private party way off the Strip, the men are horrified to find themselves the subjects of a perverse game of torture, the most sadistic show in town.