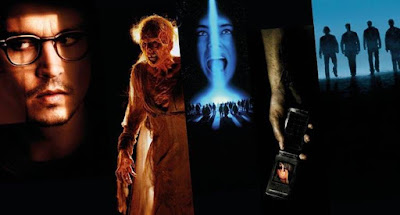 Based on Philip K. Dick's short story "Second Variety", this cult favourite stars Peter Weller as Cmdr. Joe Hendricksson, who sets out across the surface of Sirius 6B, hoping to settle a violent labour dispute at a remote mining outpost. However, the desert is riddled with deadly "Screamers", which Hendrickson helped create. These burrowing weapons, designed to protect the mines, have learned to replicate themselves and can also assume humanoid form. And now they have a new mission: to obliterate all life.

Kyle (Chaney Kley) must confront the painful memories of his mother’s brutal murder when
he is summoned back to Darkness Falls by his childhood sweetheart (Emma Caulfield), whose nine-year-old brother is having the same nightmares that drove Kyle to the brink of madness. When he returns, Kyle realises that the evil spirit who killed his mother is a vengeful spirit that has taken the form of the Tooth Fairy to exact vengeance on the town that lynched her a hundred and fifty years earlier. Directed by Jonathan Liebesman.

A woman once possessed by a mysterious entity uncovers a shocking secret about her past and must face the demon that dwells inside of her.

City detective Michael (Will Wallace) relocates to a quaint, small town with his wife Rachel (Emily Brooks), following her emotional breakdown after the sudden death of their young daughter. Michael takes a job in the sheriff’s office and is asked to investigate the mysterious disappearance of a teenage girl. As the investigation deepens he discovers secrets which unlock the realms of the supernatural and nightmare terrors. How far will Michael and Rachel go to fight the dark forces and locate the missing girl?

A remake of Fred Walton's 1979 horror film of the same name, this contemporary re-imagining casts Camilla Belle as babysitter Jill Johnson, who thinks her latest job, in a hilltop luxury designer house, is a cushy number. But then the phone rings and each time an ominous voice asks, "Have you checked the children?" Jill phones the police, who inform her that the calls are coming from inside the house. Jill's quiet night of babysitting is about to turn into a nerve-shattering nightmare of suspense, horror and dread.

A group of teens at a party play a game of 'Truth or Dare'.  It gets out of hand when one of
the party-goers (Felix) is violently picked on by the others. A few months later the group are invited to a party that Felix is throwing at his parents' mansion. But when they arrive they are guided to a cabin further up the road, to find that Felix's brother is there instead. And he’s out for revenge for what the group did to his brother - sparking a terrifying sequence of events and a whole new twist on the game of Truth or Dare - where the truth can kill you.

While in the process of an ugly divorce from his wife (Maria Bello), writer Mort Rainey (Johnny Depp) relocates to his remote cabin in upstate New York for solitude. Attempting to recover his mental health, Rainey has the misfortune of being found by John Shooter (John Turturro), a farmer who claims Rainey plagiarised his work. At first, Rainey ignores the accusations, but Shooter has no intention of quietly disappearing. The film is based on the novella Secret Window, Secret Garden by Stephen King,

In the 17th century, five families with supernatural powers make a pact of silence. Eventually one power-hungry family is banished. The descendants of the four remaining families are heirs to tremendous power. Known as the Sons of Ipswich, the boys attend elite Spencer Academy. When a student there is found dead after a party, unravelling secrets threaten to shatter the pact that has protected the boys' families for centuries.
.
Sat 27 Feb @10.45pm – THE SEASONING HOUSE (2012) *Network Premiere

Special make-up prosthetics and splatter genius Paul Hyett made his directorial debut with this harrowing exploration into tense claustrophobia, hard-hitting action and rollercoaster suspense. In a Balkan brothel, where girls kidnapped by soldiers in war-torn zones are prostituted to the military and civilians alike, Angel (Rosie Day) is the deaf mute orphan enslaved to care for the inmates. But unbeknownst to her captors, she moves between the walls and crawlspaces of the seasoning house planning her escape. This is psychological horror in the nerve-shredding Roman Polanski style but with an ultra-modern twist. Also stars Sean Pertwee and Kevin Howarth.