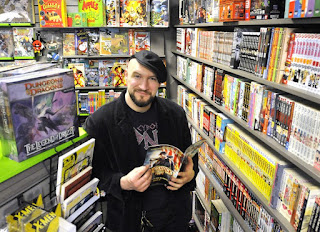 Intro
James Frazier is the owner of Cyborg One (est. 1992), a small comic book shop in Doylestown, Pennsylvania, just north of the city of Philadelphia.

When did you first become interested in comic books?

Comics were always around me as I grew up, but I think I turned the corner into hardcore fandom after the arrival of the Teenage Mutant Ninja Turtles and the 1989 Batman film.


How did you get involved with Cyborg One?

After graduating from Penn State, I moved out to the Philadelphia area to pursue training in professional wrestling, believe it or not.  I wound up working at Cyborg to make ends meet, with the thought of saving up for wrestling school, and four years later, the owner sold me the business.  It’s been almost twelve years now, and running the business has become my career. 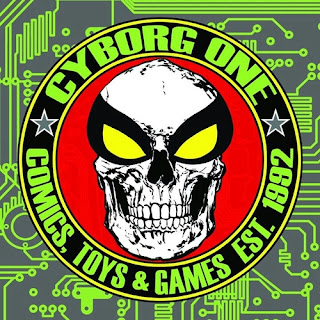 How do you think that comic book fans are different from other readers?

I’ve never worked at a book store, or a prose-specific book store, if you will, so I can’t say for sure.  As a theory, though, I’d say that comics are still such a young medium that it’s possible for one person to have read all of the groundbreaking works — to really understand where comics are and where they’re going as an art form.  It’s also possible, if you’re into a specific genre like superhero action/adventure, for you to have a certain mastery of the history of the characters and plotlines, and be able to discuss an entire publisher’s library of titles with some facility.  No one in the bookstore is a master of, say, Penguin or Ballantine Books, but comic fans tend to be pretty rabid consumers, even hoarders of information on comics.  Again, I don’t run in “book” circles, but from what I see, it seems like comic fans tend to feed social media a lot, too.  Whether they do it intentionally or unintentionally, they’re helping create buzz and sales, which is a great positive feedback loop.


You majored in English. How are comic books similar to classic English literature?

If you ignore the words-and-pictures hybrid nature of comics as a storytelling medium, it’s hard to say how comics are different from prose.  I think a lot of people would make a qualitative comparison between comics and classical literature, which is some elitist bullshit, of course.  We don’t judge all novels by the worst bodice-ripper, so some ratty issue of Cable doesn’t invalidate all comicdom.  I really do believe that comics can tell the stories of real or fictional people and ideas as effectively as any other medium.  I’m not sure that we’ve had our William Shakespeare yet — I can only speak to English-language material, really — but he or she is coming.


Which graphic novel do you think has had the most societal impact?

I think Superman, although he doesn’t have one single graphic novel that did it, has probably had the most societal impact of all comic book properties, inasmuch as Superman helped turn the American comic scene into a publishing juggernaut, from which success we’ve probably derived everything that followed, both culturally relevant and irrelevant.  I think you could make an argument that a cultural icon like Superman was also a positive role model for kids for many years, reinforcing popular moral attitudes, although modern readers seem to bristle at Big Blue’s sort of unsympathetic, unachievable goodness.


Superman aside, is there a single graphic novel that’s made the most impact with the most people?

I don’t know.  Part of me thinks that whatever the highest-selling GN or TP of all time is, that’s the one that’s going to have made the most impact, like it or not.  Maybe that means The Walking Dead volume 1 is more relevant than Maus or Persepolis, which seem like the books you’d want to answer with, but I think The Walking Dead enters more readers’ brains.


Why do you think The Walking Dead is so popular and hypnotic?

I think The Walking Dead has long-form comic book storytelling nailed down.  Denny O’Neil, I think it was, once laid out his formula for ongoing books: have an A, B, and C plot.  When A, the big, important arc, wraps up, B becomes A, and C becomes B, while you introduce a new C, a new side-story that will continue to develop.  On and on.  Robert Kirkman is always moving the plot forward in this way, and excels at leaving you with last-page cliffhanger beats to keep you coming back.  Also, while the dominant superhero genre often moves characters forward just to reset them back at status quo — the “illusion of change” concept —  I think The Walking Dead plays with its characters in permanent ways.  Limbs are lost, differences are irreconcilable, and deaths are permanent, so every issue or trade paperback has meaning in the chronicle of this world — you can’t miss part of the story, because it all means something.  I don’t think it was the first book to do any of this, but it’s one of the all-time greats in terms of sales and popularity, and it’s only about twelve years old.


Do you think adult comics like Heavy Metal magazine have changed the rules?

I’m not the best archivist and historian of the medium, so I don’t know that I have a good answer for this one.  If anything, I hope that if there are rules, creators just ignore them completely and create works to the best of their abilities. 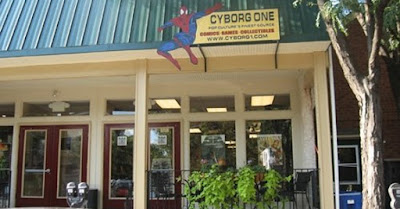 What are the differences between comic book heroes in comics versus movies?

Well, I guess that comparison could go on and on, at least in a superficial way, like saying Superman’s cape should sprout from his shoulders, not his neck, and so on.  I hear a lot of that on a day-to-day basis, so I’m kind of inured to it.  I’m perfectly alright with film adaptations of comics that miss out on a character having a two-finger versus a three-finger glove, as long as the core concept of the original work is still expressed.  I thought the movie version of V for Vendetta got what the comic was trying to say, although not every beat was the same.  Conversely, — I say this as a huge Alan Moore fan — I thought the film of From Hell missed the point of the book entirely, and the added romance plot was predictable and, I don’t know, juvenile.  Comics and movies are two different media, and while they have some similarities, they’re such different animals that no movie concept is going to work the same way on the comic page that it does on-screen, and vice versa.  Imagine all the mood and texture of Blade Runner on the comic page.  There are comics that have great settings and depth, but it’s all achieved in a very different way.  Put some comic book concepts directly onto the screen and they fall completely flat.  Have you ever noticed how unfunny Spider-Man actually is?  Like, how often have you ever laughed out loud at a funny quip from Spider-Man in a comic?  Yet you still understand that he’s meant to be funny.  Watch the Spider-Man movies, though, and most of what he says out loud sounds like Schwarzenegger puns and dad-humor.


Do you think that Christopher Nolan accomplished something remarkable by making The Dark Knight trilogy as realistic as possible?

Because of how wacky a guy dressing up as a bat and fighting crime actually is, and how weird it would look for the traditional underpants-clad Batman to run around on camera, I think Nolan did about the only thing he could do with the character to make him look and feel plausible on film.  I love the two Tim Burton Batman films, but the rules of that world are very different from the rules of the Nolanverse.  Even still, look at how much more armor-like and uniformly black Batman’s costume and gear was in those films, and how the scripts avoided any characters using magic or psychic powers.  A lot of comic concepts just don’t work the same on screen.  Look at Green Lantern’s power.  It’s wonderful on the comic page — making all these glowing green thought projections, flying across the universe to protect alien worlds and people — but it was goofy as all hell on film.  I like the Nolan films, but I think, if anything, he played it safe by making Batman so realistic.  Part of what makes Batman such a great character in the comics is that his achievements exist on a fantastic scale — he’s the world’s foremost forensic detective, an inventor, an amazing martial artist, and a lady-killer.  Squeeze all that impossibility onto the screen while he’s fighting Clayface and the demon Etrigan, and I think it’d fall apart, yet it works on the page.  I mean, sometimes.


Which superhero stands out the most for movie fans?

Batman.  I haven’t checked the ticket sales, but he’s got to be tops, right?   Avengers killed at the box office recently, but does any one character sell more t-shirts and tickets than Batman?

Minimally.  I have a few friends who’ve self-published ashcans and one-shots, and I’ve carried their stuff, but realistically, in a small shop like mine, you can’t spare prime retail display space for an unproven work, where a stack of The Dark Knight Returns would make you guaranteed sales.  Where possible, though, I do try to rep local writers and artists, especially if their work is of the quality where a recommendation can be honestly made.


What are some of your favorite movies?

I’ve reconnected with professional wrestling, actually, and I’ve got a job doing color commentary for the Keystone Professional Wrestling organization based in Lancaster, Pennsylvania.  I also collect antiques and comic books.

I used to illustrate and write a lot more, and it’s sort of my great shame that I don’t create as much now.  I do get a lot of fulfillment working on signage for the store, though, and I do a bit of repainting and antiquing of purchased goods for home decoration.  Basically, imagine a house furnished like a Hammer-era Castle Dracula crossed with Miss Havisham’s, and that’s the place I’m trying to outfit.  As a person, I’m sort of an intense, bipolar type, which can be good and bad; I just try to be a good shopkeep and host, for the most part.

If you’d like to check out my art — also both good and bad — I maintain a pretty comprehensive gallery at http://jamesjfrazier.deviantart.com, with some prints for sale, and also a t-shirt shop at http://www.zazzle.com/cyborgone.  For any wrestling fans in the UK, please know that I’m a fan of British wrestling as well as all wrestling and martial arts, so I won’t neglect to mention Billy Robinson, Davey Boy Smith, or Johnny Saint on commentary, small as my role may be. The website at http://keystoneprowrestling.com is still a work in progress, but we hope to have some videos with my commentary up soon!