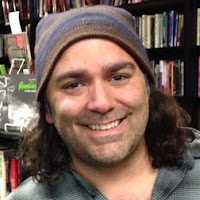 John Palisano is the current Vice President of The Horror Writers Association. His short fiction has appeared in many places. Among them: Dark Discoveries, Horror Library, Darkness On The Edge, Lovecraft eZine, Phobophobia, Lovecraft eZine, Terror Tales, Harvest Hill, Halloween Spirits, the Bram Stoker Award® nominated Chiral Mad, Midnight Walk, Halloween Tales, and many other publications. NERVES was his first novel. He is working hard on its sequel, as well as many other upcoming works.

His non-fiction has appeared in FANGORIA and DARK DISCOVERIES, where he's interviewed folks like Robert Englund, director Rob Hall, and Corey Taylor from Slipknot.

Currently, DUST OF THE DEAD, his first book from Samhain Publishing, arrived in June 2015 with GHOST HEART on February 14, 2016, with NIGHT OF 1,000 BEASTS to come in the very near future.

His work has been cited by the Bram Stoker Award® three times.

John's had a colorful history. He began writing at an early age, with his first publications in college fanzines and newspapers at Emerson in Boston. He's worked for over a decade in Hollywood for people like Ridley Scott and Marcus Nispel. He's recently been working as a ghost-screenwriter and has seen much success with over two dozen short story sales and his novel NERVES continues gaining critical and reader acclaim. There's more where that all came from.

Early on, in grade school, I was asked to do a writing exercise where we were given a picture and told to make a story up surrounding it. It was a photo of a man climbing inside an F-15 at sunset. I imagined it was the President who was off to fight an alien invasion. From that point on I knew I loved creating stories. I went through all the kid’s books, and in middle school, I ventured out of the kid’s section at the bookstore and saw Stephen King’s Night Shift paperback. The one with the eyes in the fingers. I had to have it. I loved the stories within and started making my own.

Mostly, I blame my parents. They took me and my brother to science fiction conventions when we were kids. I once danced with Nichele Nichols. My brother got to go up on stage with Christopher Reeve. We were little, little kids. We all used to go to the drive-in, and for a long time, it was Grease and Star Wars. One night we saw a double feature of Demon Seed and Alien. Alien messed me up in the best way. Then my dad had me watch Night of the Living Dead, and I thought it was good, but then the ending came with him getting shot, and the newsreel stuff, and I freaked. How could they do that? It blew my mind. It was such a huge statement. I was learning about the Civil Rights movement at school, and there was a lot of race issues in my little home town. I was entranced at how a made-up story could have such a profound commentary on the real world. It was all over for me after that!


How did you make this a full time job?

Writing takes full time hours, but doesn’t pay full time wages. I don’t know many writers who make a real living strictly from writing, unfortunately. Most have other day jobs. I’m no exception, as I work for an animal rescue and write when I can. There is a chance it could grow into a full time career if there’s a good amount of luck coming my way. It’s getting better. Last month was one of the first times income from writing paid my rent. So it’s building.


How did you become Vice President of The Horror Writers Association?

For several years I’ve been working with the HWA in varying capacities. Recently I was a Trustee. I heard the then current VP was leaving, and so I ran, and won. I’m still a little bit in shock.

They address situations and feelings wonderfully. They embrace people who are different, while also including those who may seem very normal. Horror especially gives people a safe place to work out many, many issues, while also empowering the disenfranchised.

The power of story is unreal. Last year I was reading the Harry Potter books with my boy. This has been a huge lift for him. Halfway through the first book, he put the book down and looked up at me. “Dad? Harry has a scar on his forehead like me. He’s the boy who lived. Like me.”

I kept it in, but I cried like a baby later that night. Leo had surgeries for a brain aneurysm that was very touch and go for a few years. He has a small scar at his hairline and a little bump from a small plate. You wouldn’t know it without looking, but he’s very sensitive about it. And he knows how serious it all was, even though he was very young. People are intuitive at every age.

So imagine how profound that was for me to hear him connect. And he’s in a split home, going between places. He loves to draw—he’s insane about drawing creatures he invents—and he says that’s his magic. And he felt so good that someone like Harry Potter also had a scar, and also went through so much, that it inspires him. How absolutely unbelievable is the power of fiction?

And that’s why for someone like Leo, and me, these stories draw us in and keep us.


How did it feel the first time you were nominated for a Stoker Award?

Shocked. I still feel very unworthy, and that I still have a hell of a lot to learn, and that I’m still not so great at this writing thing. I’m told that’s good and healthy, and that means I’m not an insufferable narcissist. I do feel like said insufferable narcissist having to promote my stuff mostly myself. It feels very awkward. Hi! It’s me! I’m awesome! My stuff is awesome! Won’t you come buy some of my awesome stuff so the awesome people who put it out will keep doing so? Yay! Very strange times, indeed.


What do you think Rocky Wood’s legacy is?

Outreach. He was able to grow the HWA and the positive visibility of the genre in so many last ways. He started scholarships and many other programs that will continue to help new writers meet new readers for quite some time. I think of him often, and I so badly wish I could write him every so often for advice or to show off a latest accomplishment. He’s very much missed.

Tastes change over time, naturally. Different stories speak to you at different ages. Currently I am loving the Weird Fiction movement and the wonderfully unhinged Bizarro movement. In those two places I feel at home and they tend to reflect great stuff back to me as a reader. In other words: I often learn things about myself. In weird fiction, there is a lot of explorations of the spirit, or lack thereof. There’s also lots of monsters and alternate places. In Bizarro, the sky’s the limit, and I love that there aren’t the same constraints placed on it as with most other fiction. Metaphors can be a lot more interesting. Characters are fascinating. The creativity at play is wonderful. But there’s also a tremendous amount of heart and soul to the authors. It reminds me so much of when I discovered punk rock growing up. You could be anything. You didn’t have to fit into the mold. Expression was everything. I love that.

Dellamorte Dellamore comes to mind. A very underrated classic to me. Beyond the old classics like The Shining and Alien, I’ve really loved Shaun of the Dead and It Follows. To be honest? I think the best filmed horror is on television. In general, I think the series format allows a more robust experience. Feature films are saddled with countless stories shoehorned into that format, with three act structure, and everything wrapped up. The series format feels much more like novels, where we can linger and explore things a little more fully. In features, it’s always: let’s get in and get out and make every bit exciting and perfect. But that can often take the heart from the proceedings and make it all feel very processed. So shows like The Walking Dead, Game of Thrones, Penny Dreadful and Hannibal, to name a few, are very fulfilling.

So far? It was finally finding a publisher for my first novel Nerves, which was a very long and disappointing journey. It’s out there, and is the best I could have made it,

Read a lot, and read widely. If you aren’t reading, you’re doing yourself a disservice. It’s one of the best places to find out how it’s all done. Read what’s old, and read what’s new. And then write a lot. To get good, you need to practice. Learn your instrument!

I think it has shown its potential, both good and not-so-good. Francis Ford Coppolla once said there’d be a little girl who’d one day make an extraordinary film with a tiny camera, democratizing the entire filmmaking process. He was right. The same thing has happened with publishing. The only tough part has been vetting the great from the nearly-unreadable. So much of what I’ve seen wouldn’t have ever been published by anyone, and amounts to people finishing a first draft and clicking to upload it. Many aren’t seasoned writers, and a lot are simply memoirs or life fantasies with the names slightly changed. That’s fine, but it’s hard to steer clear of. There’s certainly a great benefit because many larger houses are dependent upon certain kinds of books to sell to keep afloat. Self pubbers don’t have that requirement, so there can be some great stuff in there, for sure.

I’ve just turned in what I hope will be my third book with Samhain. We shall see. I’ve got a gentleman’s agreement on a novella, which I’ve never done. There are several short stories that I am in the process of writing by request, which amazes me to no end. My first collection, All That Withers, is due out in May from JaSunni and Cycatrix Press, which is really a big deal to me. Other than that? I am working on a new novel, as always. For me? I’ve found speaking of works in progress takes away a lot of their mojo. This happened for me with my last book. I told someone about it when I hit the ¾ mark, thinking I’d be safe. But they asked questions, and the whole thing was so much harder to steer on track. So I keep the details to myself until I write the last line these days. It’s much better for me that way. I’m not alone in that. I know several authors who have exactly the same issue. It’s very bizarre. The big picture is that I am going to have a ton of work released over the next few years, which is a dream come true.

I’m on a journey, steeped inside darkness, as is most of my work. In all of my work, there’s a truth that’s being sought. How successful each one is? Well, that’s still up to a reader. Here’s hoping I’ve hit that mark a time or two.