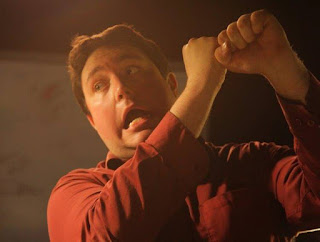 
Not many people can say they were mentored by Roger Corman, Peter Bogdanovich and Stuart Gordon for their feature debut. What did you learn from each of these filmmaking icons?

I have been incredible fortunate so far to have met any of these guys! Stuart was actually the only one who helped directly on this film, giving feedback on the script and helping shepherd us away from some big missteps with schedule and makeup effects. But Roger, and especially Peter are people that I’ve spent more time with, and really helped shape the way I think about film. I used to watch a lot and read about these filmmakers when I was younger, so it has been eye-opening getting to know them and finding out they’re every bit as awesome as you’d hoped, but still down-to-earth people.


Was your short film PATCHWORK a testing ground for the feature?

Sort of. We shot a two-minute short and called it PATCHWORK as a tone-test for an unrelated feature script I wrote called THE DISSECTIONS. It worked, and got people excited about the idea, but probably too well because they kept asking “Hey, is there a feature version of that short?”.  Then Chris and I started to flesh out what a longer idea would look like, and used the short as a proof of concept.


How long did it take to write the script with Chris Lee Hill and how did you hit on the idea for the main visual concept of the three women as one entity?

The seed idea of three people in one body was in the short. That’s something that we’d never really seen before in a horror film, and was a fundamentally creepy way to approach a Frankenstein-esque story. From there Chris and I zeroed in on the idea of Frankenstein as a metaphor for cosmetic surgery and self improvement.  Once we figured out the idea of seeing inside her head, with the three girls embodied and interacting with each other, the main characters became very apparent. We both really loved RE-ANIMATOR, DEAD ALIVE, and EVIL DEAD II so we veered pretty heavily in that direction and things started to fall into place. It was only three weeks before we did our first table read of the script and started looking for financing.

That’s funny, a lot of people have been bringing up FRANKENHOOKER to us, for obvious reasons. The stories aren’t really very similar, but I like Frank Henenlotter a lot. I had seen BASKET CASE and BRAIN DAMAGE growing up, but truthfully hadn’t seen FRANKENHOOKER until we were already in the middle of shooting the movie. We were deep in prep before I got a copy at Amoeba Records and I didn’t have time to check it out until Chris and I sat down on our one day off, in the middle of production. There is definitely a lot of the same anything-goes horror-comedy style in our movie, but it wasn’t really on our radar.


Tory Stolper is amazing as Jennifer and almost seems to be channelling Steve Martin in ALL OF ME for her awkward movement role. Was that your suggestion?

I wish it was, but bringing in a lot of the physical comedy references was all Tory. Oddly, I was more concerned with the make-up and voice stuff going into it, so we had a lot of rehearsals one-on-one that just dealt with that stuff. We got really lucky that she took such ownership over the physicality and was capable of doing the vast majority of her stunts herself.


Tory and co-stars Tracey Fairaway and Maria Blasucci work seamlessly together. Did it take time for them to find their chemistry or was it instant?

It was actually a really strange process to see, from my perspective. I’d met with the actors all individually, and then we had one group rehearsal before the first day. Tory basically knew the script verbatim because she’d been working for months. I knew Tracey from a previous movie, and she is always a brilliant ball of energy. I had only just met Maria, and I knew she was very sharp and extremely funny - so they were all quite different. But on the first day, once we got everyone in costume and started walking it through - everything just clicked, and their chemistry got better and better as the shoot went on. Now they’re actually good friends. 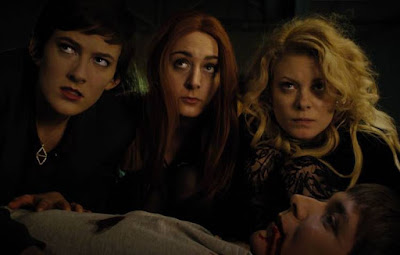 Was it difficult to strike the right tone between the balance of splatter and slapstick?

Yes, that was our biggest story concern, finding the right balance. I think a lot of recent horror films take themselves too seriously - as in they literally seem to take place in worlds where laughter is somehow non-existent. We wanted to try and do something closer in tone to horror movies we grew up with, many of which had a very wicked comedy streak. Doing something that is kind of throw-back can also have its pitfalls, because we wanted it to be contemporary, creative and original, not like a cover-band version of an ‘80s movie. Overall, we really just wanted to make a fun ride. Personally, I was aiming for a horror-comedy not a comedy-horror, and it probably ended up a little too far on the comedy side for some of the diehard horror fans out there. But hopefully they pick up on enough influences to know that we are legitimately massive horror fans ourselves and forgive us.


Great Saul Bass/Alfred Hitchcock style opening credits, you must be a big fan?

Huge fan of both, obviously. I’m pretty sure you’re almost not allowed to be a horror fan if you don’t like Hitchcock. Its hard not to love anyone so influential. The title people at Eevolver were also really stoked that we chose to go that direction with the opening animation, and once they heard the main theme it really came together.


Why did you choose Russell Howard III, composer of HOBO WITH A SHOTGUN, for the soundtrack?

Haha - I’ve actually worked with Russ many times and he always kills it. Especially on HOBO if anyone hasn’t seen it. He did my thesis film at AFI, as well as a bunch of projects subsequently, so we’ve gotten to know each other pretty well. For a lot of crew positions you usually have a list somewhere with ideas for people you could work with, but for me, my list of composers is really just a post-it note beside my computer that says “Russ”.


You are clearly a horror lover, so will you be remaining in the genre for the foreseeable future?

I am definitely a horror lover, and most of the scripts I am developing right now have some horror element to them. I don’t think I will remain there forever, but I do tend to come up with genre-type stories, which are also a lot of fun to make, so I’m hoping to stay in this part of the narrative world where you can get away with pretty much anything!

PATCHWORK screens as part of FrightFest Glasgow 2016 on Fri 26th Feb at the GFT Screen 1, 11.15pm. Tyler MacIntyre will be in attendance.

To book tickets: http://tickets.glasgowfilm.org/en-GB/categories/frightfest
Posted by JD at 12:08