Shelby Young is an American actress best known for her roles in The Social Network, American Horror Story and The House Sitter. Her latest work is playing the lead character of Vivian in the new movie A Haunting in Cawdor with co-star Cary Elwes. She is very busy promoting the new movie and generously took time out of her busy schedule for Masters of Horror.


How did you get your start?

It’s funny, when I was just about three years old my mom entered me into a pageant (my grandma convinced her to do it for fun). We went thinking it was a one-time thing but I ended up winning that pageant, and the next pageant and so on. After accumulating more tiara’s than any little girl should have, the judges at one of my final pageants ended up being modeling agents and wanted to represent me. My mom thought I was too young at the time but after at least a full year of begging she gave in. I was about four or five when we finally met with said agents and it all started from there. First I was modeling, then I started booking commercial work, some stage work and finally television and film.


Tell us about your role as Leah on American Horror Story.

Sure! Leah starts out as a total bully to Violet (Taissa Farmiga’s character) and then after getting her face slashed up by the Infantata in the basement of the “murder house”, she finds a connection with Violet (they become frenemies at best) and also sort-of becomes a bible thumper. She spends the rest of her time in the show trying to convince Violet that the devil is real and wanting Violet to acknowledge what really happened down in that basement.

Honestly I just fell into it. I’ve always enjoyed movies and shows about the supernatural and with darker tones, but American Horror Story kind of started me on a very fun horror streak.


What attracted you to your role as Vivian in A Haunting in Cawdor?

Vivian is a very troubled young woman and playing that type of character is always rewarding as an actor. Getting into that headspace can be daunting, but I had a really good time on set.


A Haunting in Cawdor features a theater boot camp as its setting. Was it interesting to see actors playing actors?

I don’t know if I would really consider our characters “actors”. Sure, they’re putting on a play, but they’re really just these mixed up “bad kids”. As you’ll see from the Macbeth audition sequence in the film, most of the characters are better off behind the scenes. What’s funny though is all of these actors having to play characters that aren’t the best at theater acting are actually all marvelous on stage! They’re so talented in real life that it must have been hard for them to pretend they didn’t know how to perform on stage.


Do you see it as a metaphor for the hard work that actors have to endure for their craft?

Not really! I would never consider acting a “jail sentence”. It’s a fun job that I really enjoy.


What was it like to work with Cary Elwes? Did you grow up watching The Princess Bride?

It was absolutely amazing working with Cary! He’s a legend, and yes I did grow up watching The Princess Bride. He’s just such a professional and so wonderful to watch. I learned a lot from him and I’m happy to call him a friend.


What inspired you when you were growing up?

Everything! Movies, books, television shows, made-up games my friends and I played.

The Exorcist, Pet Sematary, The Ring, the original Poltergeist, Scream, Rosemary’s Baby, The Orphanage, The Others and The House of the Devil.

I stopped reading horror books because they gave me too many nightmares, but as a kid I loved anything written by R.L. Stine (I’ve read every Goosebumps book) and Scary Stories to Tell in the Dark. Probably the last scary book I read was ‘Salem’s Lot.


Why do you think people enjoy watching horror movies?

The adrenaline! It’s such a rush getting scared in a safe, controlled way. You know you’re not actually in any danger, but it’s still such a fun feeling.


Do you believe in the supernatural or is it all in good fun?

I’m torn on this! My logical mind says it can’t be real, but I’ve had some strange experiences in my life…


If they made a movie about your life, which actress would you like to see play you?

An older version, Angelina Jolie (I know, cliche answer, but I’m a huge fan of hers!). But me as of now, probably my friend and fellow actress Hannah Marks. She’s super talented and I’d be so interested to see how she would play me.


Tell us what fans should expect from this new movie.

It’s a psychological thriller that take you on a journey that will leave you wondering if what you’re watching is happening for real or in Vivian’s mind.

I’m attached to star in a sci-fi thriller later this year, I’ve been doing a lot of voice work (most recently voicing a bunch of dolls & Shopkins in about eight different Toys R Us commercials) and then there are a few other projects I can’t discuss… YET!

My name is Shelby Young and I’m an actress who has been lucky enough to have had lead and supporting roles in numerous film and television projects. There’s nothing I enjoy more than being on set and pretending to be someone else. I’ve played characters ranging from a bully (American Horror Story), to a sci-fi action hero (#Hacked), to a spoiled brat (Wild Child, Days of Our Lives, Everybody Hates Chris, What’s Next For Sarah), to one of the first Facebook users (The Social Network) to a goth chick (The Midnight Game) to a geeky girl next door (Nightlight, Awkward.) to a snarky teenager (The House Sitter, Criminal Minds), to a badass video game character (Dead Rising 3), to a troubled young girl who’s had some hard knocks in life (A Haunting in Cawdor) and more. Playing versatile characters is so rewarding as an actress and I hope to continue to have success in my chosen field for the rest of my life.

You can always check out my IMDb to keep up with current, and older, projects (http://imdb.me/shelbyyoung).
I also love connecting with fans on my many social media outlets (http://instagram.com/shelbyhyoung, http://twitter.com/shelby_young, https://www.facebook.com/Shelby-Young-157738367598079/). I’ve also recently been recording a lot of voice over work, which you can listen to and view on my website, http://shelby-young.com. I thank all of you for your support! 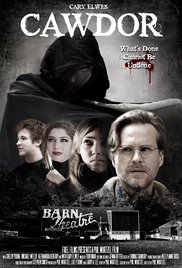 A Haunting In Cawdor
Thriller/Horror ‧ 1h 42m
Vivian, a woman serving a jail sentence, is sent to The Cawdor Barn Theatre to serve out her probation. After she views tape of an old production of Macbeth, an evil force is released, and she must identify the supernatural killer before it gets her.

Uncork’d Entertainment will be releasing Phil Wurtzel’s A Haunting in Cawdor theatrically across America in 10 markets, including L.A. and New York, and On Demand March 11th
Posted by JD at 15:31