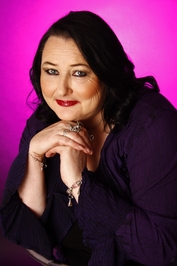 Raven Dane is a UK based author of dark fantasy, horror, alternative history and steampunk novels. Her first books were the critically acclaimed Legacy of the Dark Kind series, Blood Tears, Blood Lament and Blood Alliance. These were followed by a High Fantasy spoof, The Unwise Woman of Fuggis Mire.

Her steampunk novels so far are Cyrus Darian and the Technomicron, winner of the prestigious Victorian Steampunk Society's Best Novel award in 2012 and recently published sequel Cyrus Darian and the Ghastly Horde. These books are available in both ebook and paperback format and are published by Endaxi Press.

Raven has had many short stories published, including one in a celebration of forty years of the British Fantasy Society and in several forthcoming international horror anthologies including the 13 Ghosts of Christmas published by Spectral Press and Dean Drinkel's The Demonologia Biblica.

She was signed up by Telos to be the first author published in their new Moonrise imprint with her collection of macabre Victorian and Steampunk short stories, entitled Absinthe and Arsenic, published in autumn 2013. Raven is currently working on the third novel of the Cyrus Darian series.

As an obsessive Dr Who fangirl since the very first episode, Raven is delighted to have collaborated on a new film released on DVD, The White Witch of Devil's End.

February 2013 saw an international celebration of women writers in horror, Raven was delighted and honored to appear on two separate lists of top women horror writers.

I was an avid and precocious reader, browsing my parent’s bookshelves when still in primary school and the most enthusiastic child borrower at our local library. I would stagger home with armfuls of books and read them all in a week. I remember squirming with embarrassment in secondary school when the English teacher read out my stories to the class. Thank you Miss Curry, you encouraged and nurtured the love of fiction and started me on my future career as an author. I put this aside to follow a career as a professional journalist, but my head was always full of stories clamoring to be told.

Fantasy started early. I remember seeing an extraordinary sunset from my suburban home…what appeared to be a whole mountain range, dark and brooding with an inner lake of silver. From then I would concoct a whole exotic fantasy world and its inhabitants. Once I began reading, I always chose fantasy or SF books.  I was a bit of a Wednesday Addams as a child, always drawn to the dark side. I used to sneak down with my brother to peer through a gap in a door to watch scary programs and films like Quatermass and the Pit and old monster films. They terrified me but I was fascinated. I always rooted for the vampires, hating the likes of Van Helsing. Later I loved the original Twilight Zone and Outer Limits as well as classic horror films. When it came to writing, no other genres held any interest.


How did you feel when you were named on two lists of best women horror writers in 2015 in celebration of Women in Horror month?

Incredibly honored and delighted!  There were some extraordinary writers on those lists. I hadn’t made the mental acknowledgment that I was indeed a horror writer, still thinking I only wrote fantasy and steampunk. When I looked back at all the short horror stories I’d written, published in so many anthologies, I realized I had legitimately crossed over into that genre years before.


This year your short horror story was featured Tales from the Lake 2. Do you prefer writing short stories or long fiction?

I love both. For a long time I only wrote novels. I did not think I had the special and very different skill set to write short stories and I wasn’t ready at the start of my career. I got into short stories during a protracted spell of ill health and hospital stays when my stamina and concentration for novels had gone. It was during that period a successful short story submission triggered many commissions for short horror stories and work on my collection Absinthe and Arsenic, Victorian based ghost stories which Telos published in 2013.


Tell us about your story for Fright Mare – Women Write Horror.

The brief was to write original horror fiction, avoiding over used themes, so no zombies, werewolves or vampires. No problem until my only inspiration and plot involved one of the above. You will have to guess which one, massive spoiler alert!   I did follow the wise, old adage of bringing something new to the table. I was so over the moon when Constance Craving was accepted. The very wonderful Billie Sue Mossiman was editing the anthology and it was a dream come true to have a story accepted. 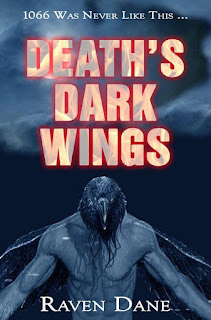 Tell us about Death’s Dark Wings and what writing steampunk means to you.

My latest novel Death’s Dark Wings is an alternative history/supernatural take on the events leading up the Norman Invasion of England in 1066. A very alternative version with old Earth magic, witches and druids, dragons and a Norman army wielding primitive steam powered weaponry.  Due to its time frame, I do not consider it steampunk per se…I prefer the alternative fantasy world of a Victorian age that never was for my steampunk work. Other writers set theirs in a future still using technology the Victorians would be familiar with. 11th century Britain is stretching it a bit!
My love affair with steampunk began long before I started writing it. I loved the whole creative aesthetic, the art, the jewelry, clothes and music and most of all the people. The British steampunk community are lovely, a totally fun, non-judgmental, non-cliquey gathering of like-minded, creative folk where everyone is made most welcome.  I wrote the first novel Cyrus Darian and the Technomicron as an expression of my love of steampunk and its community. I must have done something right as it was voted Steampunk Novel of the Year in 2012.


What do you see as the primary difference between British and American horror?

To be honest, I am not aware of anything that stands out….different settings of course. I enjoy horror from either side of the Atlantic. We both can do visceral and shocking as well as creepy and psychological equally well. British horror fiction enjoyed a lively upsurge over the past decade, sadly not reflected in bookstores like Waterstones who have crammed SF, Fantasy and Horror into one small bay in their shops.

Too many to list after so many decades of only reading horror!  But those that immediately stand out are Salem’s Lot and The Stand by Stephen King…the master.  Wolf’s Hour, Robert McCammon, The Keep, F Paul Wilson. Every ghost story by M R James.  The Woman in Black by Susan Hill.  Sam Stone’s deliciously addictive and different Vampire Gene series.
Heart Shaped Box by Joe Hill.   And anything by the scary as hell Adam Nevill, in particular Last Days and Bouquet for the Damned. Shudder.

The first ever enthusiastic email from a reader of my first book, Blood Tears. That made it all worthwhile and spurred me on to carry on telling stories.

I am not a fan of creative writing courses and the plethora of ‘how to write’ books, with the exception of ‘On Writing’ by Stephen King…not read it myself but it is endorsed by many exceptional authors. I am concerned that books and courses for new writers stifle their unique voice and creative spark. Many new writers seem to get addicted to courses and writers’ groups and lose confidence in their work, sometimes for years. The adage, read, read and read then write, write and write holds true.  And don’t stick to one genre with your reading.  I spent time working as a library assistant and read a wide range of fiction, opening my eyes to fantastic writers like Mervyn Peake, Michael Moorcock, Karen Maitland and Mario Puzo. Don’t be afraid to say, enough…it is finished.  Time to bite the bullet and get it out to the world. There will always  be time for re-writes once an editor gets hold of their manuscript.

Oh dear, stepping on treacherously thin ice time. Anything I say will be misconstrued and used against me….again.  I must therefore state for the record that I have nothing against self-publishing or the writers who do it. The reading public do not care how books end up on their shelves or eReaders. Only that the story is well written, cohesive and entertaining. To offer anything less is letting down the people who pay good money for a book and the biggest consumer complaint about self-published books.

Where self-publishing falls down is when writers upload their work online with no professional editing. Having a sharp-eyed auntie or neighbor check for typos and spelling is not editing. Self-editing is a nonsense…all writers including the A list professionals are too close to their work to spot plot holes and problems. A good editor will make your work shine. Anyone who is too precious with their book to allow any criticism or refuse to change a word is doomed to failure.
Now I will await the online equivalent to angry villagers wielding pitchforks and blazing torches… (Inserting an imaginary smiley icon)

I have recently finished a batch of short horror story commissions and steeling myself to get on with woefully neglected novel works in progress including a fourth Cyrus Darian book and a Victorian supernatural adventure. Readers want another short story collection and I do have enough to bring one out soon….possibly entitled Balefire and Brimstone.

I am Raven Dane, writer of dark and comedy fantasy, steampunk, alternative history and horror novels and short stories. I live with my family in the beautiful Chiltern Hills area of the UK and our menagerie includes my lovely Iberian mares and a tankful of tropical fish all called Neville. I am a great fan of attending SF and Fantasy conventions, a great way to meet my readers, also cosplayers are wonderful! My mother was Irish, my father is Welsh and I often draw heavily on the ancient myths and folklore of these isles for inspiration. Like most writers, I have the ambition to see one of my books or stories turned into a film or tv series, preferably starring Tom Hiddleston.