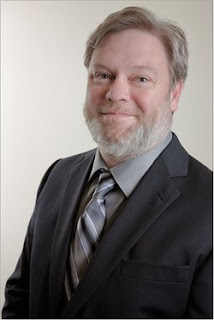 I have known David Kempf for many years now, and we have had a great relationship, whereby I have published some of his short stories on this site, as well as interviewed him many times regarding his various books. David is a highly intelligent man, with a great and unique writing style. I was very happy to sit down with David and talk not only about his new book "Travel Bug" but also about he started in writing and his interest in Horror and Fantasy, so sit back and read this interview.

When did you first become interested in writing?
I was never good at math or science so naturally I was attracted to English. I majored in English in college; writing papers saved me from low grades in other subjects. When I was in high school and college, I wrote screenplays for the short movies my friends and I made. After graduating from college, I wrote for local newspapers doing small-town news events, feature stories and movie and theater reviews.

How did you get involved in fantasy/horror?
I guess I’ve always been interested in it. When I was a kid I liked Scooby- Doo and the stop motion animation movie Mad Monster Party. That’s when I was very young. When I was a little older I liked watching the classic horror movies like Dracula and The Wolf Man. On TV I liked to watch creature features and Ultraman, Johnny Sokko and His Flying Robot was also a favorite. The first horror novel I ever read was The Shining and then I read Jaws. Edgar Allan Poe followed and I was hooked on reading horror. Star Wars and Alien also inspired me, the books and the movies. I wrote short thriller stories in college and grad school for the local fiction magazines Lemuria and The Grackle. When I was younger my friends and I made short films for the local cable station. Then I started writing for you, I wrote interviews, I wrote stories and then finally I wrote my first novel Dark Fiction in 2009.

What do you see as the primary difference between British and American horror?
That’s a good question. England is the birthplace of Dr. Jekyll & Mr. Hyde, Frankenstein and Dracula. Americans, of course have Poe and Ray Bradbury. I would say the main difference is that in many cases American horror is about how the monster is the other. British horror seems to be largely about how the monster is us. John Carpenter said that a lot better than I did (about the difference between leftwing horror and rightwing horror) but I think you get the gist of the message.

What are your favorite horror books?
There are probably too many to name but here goes. It’s kind of a three way tie between Jonathan Maberry’s Patient Zero, Peter Straub’s Ghost Story and Anne Rice’s Interview with the Vampire. In addition to that I think the classics like Mary Shelley’s Frankenstein and Bram Stoker’s Dracula. Anything by Poe would come to mind. Stephen King’s Pet Sematary is the most terrifying book I have ever read. I also enjoy just about anything by Ray Bradbury and William F. Nolan. I like to listen to audiobooks as well. Ray Porter’s reading of Richard Matheson’s Hell House is brilliant. Every summer I listen to the audiobook of Jaws. The differences between Peter Benchley’s novel and the movie are profound. Clive Barker’s Books of Blood are the best collection of short stories I have ever read.

What are some of your favorite horror movies?
John Carpenter’s The Thing, Alien, The Evil Dead (1982), Black Christmas, The Exorcist, The Shining, The Dead Zone, The Fly (1986), Hellraiser, Poltergeist (1982), Scream, Psycho 2, The Hunger, Let’s Scare Jessica to Death, The Haunting, Dressed to Kill, An American Werewolf in London, The Silence of the Lambs, Fright Night (1985), Rosemary’s Baby, The Omen. The Changeling, and An American Haunting. Last but not least on the list would be Halloween III: Season of the Witch. I will always stand by it and defend it. May those who hate on it spend eternity in a realm where no Halloween candy is available. Those are my favorites but I still like the so bad its good stuff and I think amazing work can be done on a low budget. Don Dohler’s Nightbeast and Fiend come to mind. Douglas McKeown’s The Deadly Spawn is another good one. Jaws is my favorite movie of all time and always will be. 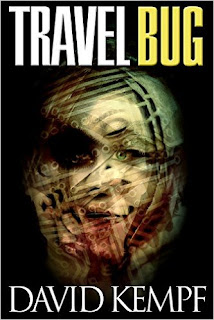 Tell us about Travel Bug.
Travel Bug is my third novel. It’s very different from the first two Dark Fiction and The Petsorcist. It’s the combination of science fiction and horror that I love so much. It’s about a young man and his great grandfather traveling through time to find the identity of his parents’ killer. Along the way they discover that human history is not what it seems to be in terms of the history books. Cherished and sacred beliefs are shattered during their travels. Among them is the idea that people are more good than evil.

Travel Bug focuses on controversial things like politics, religion and the meaning of life. Why did you want to get into those awkward topics?
If you actually had a way to travel through time, I think these elements would be inevitable. You would have to confront them. Human history and civilization is full of conflicting beliefs and actions. The basic premise (at least as far as the antagonist is concerned) is that time travel dispels most of your most cherished beliefs. Now what happens after that?

Is the story meant to be taken literally?
Not necessarily. The opening line of one chapter is “Are they revelations or hallucinations?” I think that kind of leaves the door open for the reader to interpret the story. There are many fantastic elements in the story combined with real life events and things that don’t exist. Let’s face it there has never been any evidence of time travel. At least they don’t exist as far as I know. So I think whether the story is real, a hallucination or a dream is in the eye of the beholder.

Is this a sequel to Dark Fiction in any way?
No but it takes place in the same twisted universe as Dark Fiction. There is even a certain professor who makes a cameo appearance. So Dr. Wells and Christopher are mentioned in passing but mostly its new characters who struggle under much different circumstance. The evil genies The Jinn are occasionally mentioned but this story is not about them.

Are the characters of Harold and Andrew based on people in your own family?
Yes, to a certain extent they are. Andrew is my son and Harold was my grandfather. The book is dedicated to him. He was an avid reader. My grandfather was a devout Catholic and his favorite book of all time was James Clavell’s Shogun. The book’s main premise was that the world would have been better off without Christianity. That’s hilarious. He had an open mind. Still, these are fictional characters. Typically I take a composite of real life people and blend them together. The result is often that they take on a life of their own.

What do you consider your greatest accomplishment as an author?
The fact that I haven’t given up, I guess. My books have received mixed reviews and occasionally some folks have told me they don’t understand them or that they are “really out there.” Other than that I suppose actually writing my first novel and seeing it come to fruition. I can’t tell you how many times people tell me they are going to write a book someday. They almost never do it. I think probably the most meaningful accomplishment I’ve had is putting all of my interviews together for The Horror of It All.

Do you have any advice for new writers?
Yes. Write everyday if you can. Read all that you can. Read outside of your genre. If you write two pages a day in a year you will have a novel. Then you won’t have to be one of those poor souls who talk about doing it and never do. If you write horror then write about what scares you. Don’t hold back because you might surprise yourself by how far you will go. Then once you have something good or at least half decent, get other writers to read your novel.  You should try to get as many blurbs as possible. I ask a lot of people to write them, sometimes they say yes and sometimes the answer is no. I think that it’s a good idea to diversify too. Some of my blurbs are from other novelists but I also try to get editors, short story writers and people in the movie industry.

What is your opinion of the new self-publishing trend?
Where would we be without Amazon? It’s the great equalizer that makes things fair for the independent author. They have standards so it’s not like people can publish anything. Still, there is a great deal of freedom now. Most new writers will not land major book publishers and small publishers are limited. Some traditionally published authors believe it’s producing a lot of bad books. Others think that books that would have not otherwise been published can now be available to the public. I think that many of the major publishers are similar to movie studios in that they are obviously looking for the profits of a sure fire hit. Sadly, this explains why we keep getting the same unoriginal stuff over and over in the bookstores and certainly at the movies. So I certainly welcome the self-publishing trend. I also love visiting independent bookstores and I hope they can co-exist with the phenomenon of eBooks which I believe will be the future of publishing.

What are your current projects?
I’m working on a novel that is a direct sequel to Dark Fiction with all of the characters returning in it. There will also be some new ones I hope the reader will find interesting. I’ve also written some stand-alone novellas that will eventually be published.

Please in your own words write a paragraph about yourself & your work.
I’m a horror and science fiction novelist and short story writer. I believe that every book from The Wizard of Oz to Justine, or the Misfortunes of Virtue has something to teach us about the human condition. I like to take some traditional monsters and put some new twists on them. So I hope to be entertaining and disturbing at the same time. I want the reader to know that no one is safe, death is coming for all of us and I hope I do it with a good sense of humor.

Thank you for joining us for this interview David, below you will find some links, please everyone go check them out!

David Kempf - Amazon About Me Page