Wilde has performed in cabaret in Bangkok, Thailand; robotically danced in the Indian blockbuster, Janbazz; was a vicious thug in Michael Winner’s Death Wish 3; and played a drummer in the so-called “Holy Grail of unfinished and unreleased 80’s horror”: Grizzly II: The Concert, which also featured then unknowns George Clooney, Laura Dern and Charlie Sheen.

In the early 1980s, Wilde danced professionally at the top nightclubs and rock venues of New York, London and Amsterdam with her group, SHOCK. SHOCK released two singles on RCA Records and supported such artists as Gary Numan, Ultravox, Depeche Mode and Adam and the Ants.

Wilde wrote and presented eight music and film review TV programs in the 1980s and 1990s, interviewing such pop personalities as Iggy Pop, The Sisters of Mercy, The B-52s and Johnny Rotten, as well as actors Nicolas Cage and Hugh Grant. Wilde was also a Casting Director for the BBC’s The Buddha Of Suburbia and for MTV’s The Real World: London.

Please tell us about your new illustrated horror short story collection Voices of The Damned.

Here’s the blurb that I came up with for the book, which I believe describes it perfectly:

Enter into the mind of Barbie Wilde, whose disturbing interior world teems with the voices of rebellious female demons, devilish witches, semen-hungry neo-vampires, raging gods and home invaders, the fiends of sleep paralysis, pint-sized store-front preachers with a whiff of sulfur, body horrors of the most grotesque kind, clandestine aliens and Zulu zombies.

I’ve been writing ever since I was a little kid. I wrote a play about the American Revolutionary War patriot Paul Revere when I was 12 and acted out all the parts in front of my 6th grade class. That was the first time I heard applause and I was hooked. Even when I was a full time actress, I was trying my hand at screenplays and TV shows.

When I hit my mid-thirties, “acting left me behind” as thespians say, and I turned my hand to casting commercials and TV shows, however, the love of writing was always buzzing away in the background until I was working on it full time, creating my debut diary-of-a-serial-killer novel, The Venus Complex, which was published by Comet Press in 2012.

In 2009, I wrote my first short horror story, “Sister Cilice” (the tale of a sex-starved nun who transforms into a female cenobite), for the Hellbound Hearts anthology, which was edited by Paul Kane and Marie O’Regan. I was subsequently asked to submit to other short horror story anthologies such as The Mammoth Book of Body Horror (again edited by Paul and Marie) and Dean M. Drinkel’s Phobophobia, Phobophobias, The Demonologia Biblica, The Grimorium Verum, etc. Many of these stories are featured in Voices of the Damned.

I’ve always been interested in the criminal mind, which is why I wrote The Venus Complex. Writing horror isn’t such a great leap from crime, because I tend to write about real life horror. Man really is the scariest monster of them all. Although this doesn’t preclude me tackling supernatural subjects such as vampires, demons, enormous polyps, and possessed children as well.


How did you land the part of the Female Cenobite in Hellbound: Hellraiser II?

The casting director for Hellbound, Doreen Jones, called my acting agent and arranged for me to audition with Tony Randel. I nearly didn’t go because the first Hellraiser film disturbed me so much! I also thought that I was going up for the role of the Chatterer and I hated the idea of that kind of heavy mask work, having done it in the past. However, I had a great chat with Tony and I ended up getting the part.

Why? I’m not sure. I did have classical mime training and I know that Clive was very interested in mime, so that might have been a deciding factor.


Was it scary to work with Charlie Sheen?

In Grizzly II: The Concert, Charlie played a “Red Shirt”, i.e., a fairly inconsequential character who gets killed off quite quickly. I never actually met him, or Laura Dern, or George Clooney during the filming. (It’s amazing how many soon-to-be-famous actors appeared in this so-called “Holy Grail of unfinished and unreleased ‘80s horror”.) All my scenes were filmed on a huge concert stage in a national park in Hungary. I was playing a drummer in an electronic band performing in the park while Charlie, Laura and George were being munched on by the bear in the forest somewhere nearby.

Grizzly II was a very strange experience, but I did have a lot of fun. Bits of the film can still be found on Youtube. I think there were a lot of technical problems with the mechanical bear, which kept breaking down, along with the usual financial woes, that finally scuppered the film.

I was thrilled, to say the least. I initially contacted Chris Alexander, the editor-in-chief of Fangoria at that time, and asked him if he wanted to review The Venus Complex. Chris asked me to send him everything that I’d written up to that point and we ended up doing an interview featurette in Fangoria #321 called “Bad Barbie”.  Chris really understood where I was coming from in trying to explore the sexual mindscapes of my characters in a way that I felt hadn’t been done before. It didn’t matter if the character was a Greek myth-obsessed shut-in, or a 300 year old witch, or an author suffering from writer’s block, or an art history professor who ends up morphing into a serial killer.

Also, having New York Times best-selling author John Skipp review The Venus Complex and a filmmaker like Izzy Lee review Voices of the Damned was brilliant, as I love their work so much.

What does Clive Barker think of your fiction?

Clive has been incredibly supportive of my work, as well as being very generous. His beautiful artwork, “She Waits”, is the cover art for Voices of the Damned, “Kiss Me” for my nun-turned-Female-Cenobite story, “Sister Cilice”, and “Princess Breath” for “Gaia”.


What do you see as the primary difference between British and American horror?

You know, I’ve never thought about it in those terms. Although I’ve been in the UK a long time, I’ve only written two stories from a British perspective. The first one, “Zulu Zombies”, appeared in the antho The Bestarium Vocabulum (edited by Dean M. Drinkel), then it was reprinted in Fangoria’s Gorezone and it now features in Voices of the Damned with a fantastic illustration by Nick Percival. Milton Keynes and London are the settings for “Zulu Zombies”.

“Blue-Eyes”, a story that I’ve just written for the Best British Horror: Green and Pleasant Land antho, is set in the green belt north of London.

Since I grew up in Canada and the USA, I’ve always given a North American sensibility to my stories because that’s what I know best. That’s also where the biggest differences can be found, for example: the lingo, the locations, and the cultural background and perspectives of the characters.

Dracula, Frankenstein, The Hellbound Heart by Clive Barker, The Stand, The Shining…

Hellraiser, Audition, The Ring, Sinister, American Mary,  Invasion of the Body Snatchers (1956), The Haunting (1963), The Thing From Another World (1953), Carpenter’s The Thing, Alien, Halloween…

To fearlessly explore the minds, the urges and the emotional landscapes of my characters and to never self-edit myself while doing so. 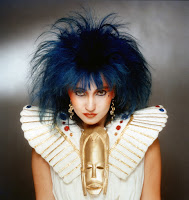 My favourite inspirational quote is from the movie GalaxyQuest: “Never give up! Never surrender!” It’s the best advice I can give to anyone going into the arts.

I’ve always gone with well-respected independent publishers because they’re very supportive and enthusiastic about my work. I’ve had some friends go the self-publishing route and I think that they’ve been rather disappointed by the response they’ve received. Of course, there is always the “Twilight”-type example that shows that self-publishing can lead to great success, but that’s probably the exception that proves the rule.

I’m currently working on a couple of film scripts based on two of my short horror stories. I’m also gearing up to the 30th Anniversary of Hellraiser in 2017. There are some horror convention appearances with my fellow cenobites on the horizon.

Well, the narrative arc of my career has certainly been a wild one. (Pun intended!) Starting out as an actress, then having a pop career in the early ‘80s, moving into writing and presenting as a host of eight different TV shows, then working as a casting director, and finally becoming a published author. I guess you can say that when one door opened, I didn’t hesitate, I just walked through and discovered the strange and wonderful surprises that lay beyond. Becoming an author has been one of my favourite and most liberating career choices as I’m fascinated and exhilarated by writing fiction, where there are no boundaries to my imagination. As far as my work is concerned, I consider myself very much a character-driven author. Instead of just playing roles, I now create characters — the darker the better — and then let them loose upon the world. And if you do choose to read one of my twisted and erotic tales, not only will you hopefully be scared and disturbed, you’ll also be amused — and perhaps even offended and disgusted. But the likelihood is that you’ll always remember my horror stories.