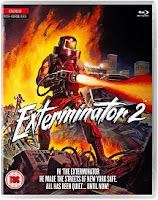 Exterminator 2 is released on Bluray September 5th. And to celebrate we have a great competition for you and 3 copies on Bluray to give away.

John Eastland (Robert Ginty) is back and hes cleaning up the urban jungle again but this time, hes going to do it right.

When his brother is fried alive by The Exterminator during a hold-up attempt, the satanic X (Mario Van Peebles) and his gang decides to get even and eliminate The Exterminator. The marauders unleash a campaign of violence and barbarism and, as they terrify the populace, it appears they may be invincible. But they make a terrible mistake they cripple The Exterminators girlfriend and its a mistake they quickly regret.

Donning an Army jacket and metal mast and arming himself with his flamethrower, The Exterminator takes to the wheel of his garbage truck and sets to clear out the city of its malignant human refuse. In a confrontation of all-consuming fury, the warlords meet their match

Terms and conditions
1. Closing date 19-09-16
2. No alternative prize is available
3. When the competition ends as indicated on this page, any and all entries received after this point will not count and emails blacklisted due to not checking this page first.
4. Winners will be chosen randomly and will be informed via email.