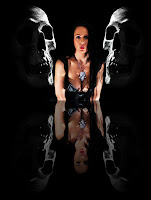 She has followed the EP with an Album Titled Beyond Imagination which was release on 8 October 2013. Judy Vamp-Shire and her Band perform at private and public events.

Judy is currently working on a new TV Horror Show called Nightmares From The Vampires Lair, where she is Hosting Horror Movies. Judy can also be made available for Recording, Touring, TV, Film and other interesting and professional viable projects, with other Bands and industry professionals.

Tell us how you became involved in performing.

I was in a pub in the UK when I bumped into my gynaecologist, like one does! Who was with a friend of his, this blonde Adonis of a guy with a strong pulse which attracted my Vampire instinct. He was in the music business, we hit it off and he became my boyfriend. Anyway at that time I had never sung or performed in any professional way, I think my biggest gig was in the shower by myself! I just enjoyed singing around the house to myself and never thought making a career out of singing. When he heard me singing he was blown away with my voice but never encouraged me to take up singing as a profession because after 20 years in the business he knew just how hard it is to get anywhere regardless of the talent! So moving on we travelled to the USA a lot where he had many friends and I started singing at private parties for some of them. The word spread and I got more and more offers of work, that's how my career started off performing as a singer. 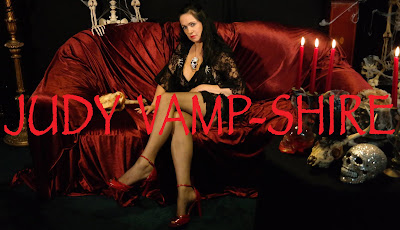 How did you come up with your vampire persona?

I have always been a Vampire in my private life. But going back in time Vampires were not very well received in normal everyday life and the Gothic lifestyle people associate with it was also not well received in the early days! So it was more the reverse I came up with a sort of nice girl from next door image on the outside and was living a Vampire lifestyle behind closed doors! Being a very private person I liked to blend in with my surroundings so as to go unnoticed.

As my singing career developed I found myself being marketed as a posh sophisticated Jazz/Blues Singer doing up market gigs many in castles and stately homes for wealthy clients. The lifestyle was great but it was not the real me! Meanwhile the interest in Vampires through movies became huge, so one day I said to my management. I want to stop what I'm doing and I want you to erase my musical past. I’m going to come out and let the World see who I really am. Create a new genre of Rock music called Vamp Rock, make a Vamp Rock Album of original songs with lyrics about my world and life. Bring my private Vampire life into my public life and be myself. That is what I did back in 2013 and to my surprise people actually liked me for what and who I am, a Vampire. So the answer to this question as you can see is I did not come up with my Vampire persona, I was always that person. 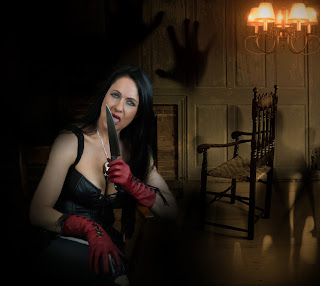 Tell us about some of your influences.

This is hard question to answer because generally I'm not influenced by anything.  My music is not influenced by any other band or singer I can put my finger on. I love most music perhaps Rock, Blues and Jazz the most, but I also like any good music regardless of the genre. I have great admiration for artists like Gary Moore, Dave Gilmour, Santana, Joe Bonamassa, John Bonham, Keith Moon, Lemmy and B B King. Bands like Led Zeppelin, Pink Floyd, Alice Cooper, Aero-smith and Bon Jovi. Singers like Barbra Streisand and Judy Vamp-Shire!Barbra Streisand

My life style is obviously influenced by Vampires, Gothic, Black Magic, The DarkSide, Horror and much more. But i’m my own person with a unique blend which I don’t attribute to any one thing! I am the missing link between good and bad, light and dark. I have an immense amount of love and good to give and yet i’m living in a dark, gothic almost twilight zone


Do you enjoy introducing the world of horror to more viewers?

Yes, I do, yet in a way thats I hope unique to me. I try to make horror a thing that's frightening in a good way, scary in a fun way. Where evil is good and good is evil! I have got fans of all religions, many devout in their religious beliefs, that accept me for who I am and genuinely love me. Even though i’m not of their faith and in many ways the last person you would expect them to have anything to do with! So horror and myself have built a bridge I would never have thought possible. So yes I love introducing the world of horror.

Probably to have survived being in the music and now tv business without ruining my life with drink or drugs. To get through the rollercoaster of being and artist is my greatest accomplishment. A close second is my Album beyond Imagination, 10 original songs that tell a story about my world. And a third if it's ok to list 3 accomplishments as my greatest overall Accomplishments? To have the opportunity to Host Horror Movies as myself a genuine chick from the dark side!


Name some of your favourite horror books.

I very rarely have time to read books but from memory I think The Devil Rides Out was my favourite fictional horror book.


Name some of your favourite horror films.

I enjoyed Dracula Untold, thats a favourite and also love many of the old Hammer House Of Horror films. Actually being a Horror freak I love most horror films even the low budget crap films. In fact there are so many I love, i’m having a problem naming my favourite horror films, so lets say most of them!


Why do you think horror remains popular?

People all have a fascination for horror. Maybe it's a genetic thing going back hundreds, perhaps thousands of years when the night was a time to fear, superstition was the reality of life and anything that could not be explained was generally feared. These days horror is an escape from the modern world we live in. Where we can experience the fear without the danger? The dark has a primeval lure which is horror and thats what makes it so popular!

I am currently finishing off filming my new tv show called Nightmares From The Vampires Lair where I am hosting classic horror movies a bit like Elvira did years ago. This time it's being done by a genuine Vampire and what you will see is the real me complete with my quirky ways and sense of humour.
I also have 2 other tv projects on offer for 2017 and my management are looking into getting me on tour with my band in the USA during 2017.

I am Judy Vamp-Shire a blood loving sex crazed Vampire making a living as a Vamp Rock singer and now a TV Hostess earning just enough money to pay for my spooky old ruin of a home, feed my wolf dog Vamplena and pay for the vets fees for Vamplena and my collection of bats which total around 300. I drive a black BMW Z4 which was the most Vampire looking sport car I could find and a black turbo charged Volvo estate/station waggon, that looks like a funeral hearse which I use to transport Vamplena my wolf dog. Within my home I surround myself with a collection of weird things, skulls, skeletons, things related to magic, mystery, horror, vampires, legends, unusual gothic artefacts and other secret things I cannot tell you about! My music is my own genre I call Vamp Rock which is a mix of atmospheric Rock ballads and high energy Rock music all with lyrics about me, my life, vampires, witches, black magic and the dark side. My new tv work has me currently working on a show hosting horror movies from my vampires lair and other unusual spooky places. With 2 other new tv opportunities on offer for 2017 for which I cannot give details yet, but I can tell you they encompass things related to my lifestyle and music. They will be exciting, mysterious and nothing like you have seen me do before and I can’t wait to get my fangs stuck into them!