Michael Baker is a talented magician who has combined two great things that go together - Magic and Halloween. Michael has brought back a classic magic trick The Vampire Block Escape. As an amateur magician, I really appreciate owning a great trick the way it was always meant to look. Now you can see for yourself why magicians in England and America are praising this talented artist.

I was about seven years old. I received a magic set for Christmas. After playing with it a bit, it found its way to my closet. My uncle saw it and decided to show me the cool magic that could be done with “my” stuff. I was hooked at that point.


How did you get involved in fantasy/horror themed tricks?

This probably started very early on, and very likely with a book called “Spooky Magic”. From a very young age, I loved Halloween, and all things monsters. Combining the two was a natural occurrence, and although I would include magic that leaned toward horror on occasion, I did not totally theme my shows in this way for quite a number of years.

How did you go about finding venues to perform?

This really began by getting known first as a magician. Aside from the inclusion of a horror or geek routine or two, the opportunity to work a full horror illusion show came much later when I was asked to become part of the entertainment at a large Halloween haunt in Birmingham, AL.

I worked this month-long venue for ten years. Once I had established myself, I then wrote a majority of the shows, created the illusions used, and built them and the stage sets. I had the opportunity to work with some other great acts, from fire dancers to sideshow freaks. Even though we built these shows on a shoestring budget (we wanted the majority of the paycheck going into our pockets!), it was a great opportunity to be very creative. In that regard, we were basically given carte blanc. 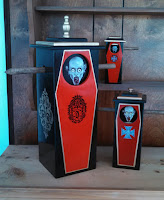 Tell us about your version of The Vampire Block Escape.

The Vampire Block Escape is a classic trick. A wooden block is placed into a tube-like box, and locked in place by a spike that runs through the sides of both the box and the block. As I was increasing the list of items that I could build, I naturally wanted to include as many spooky Halloween effects as I could. But as with all the props that I make, I wanted to give the Vampire Block Escape my own spin.

Typically, these were a bit cartoony in appearance, either stenciled ghosts, bats, against a full moon. Every version I saw seemed more appropriate for kid shows. I wanted something a bit darker, and well, “cooler”. Giving the thing a more “Victorian goth” look was more in line with how most adults would envision a vampire, so I had to first give them a scarier vampire. A block with a bat just wasn’t going to cut it. I came up with the face, somewhat based on Nosferatu, and a bit of the vampire from “Salem’s Lot”. That’s a scary vampire!

The box (tube) needed to be more than a box with random spooky stuff painted on it. Even though it had to still be a square tube in order for the trick to work, I painted the front to resemble a toe-pincher coffin and gave the top a more gothic appearance. I had to opt for a slightly different method in order to pull off the look, and I think it all came together nicely. I have made these for several years, in three different sizes, and they continue to be popular sellers.


Is Halloween your busiest time of the year?

Regarding shows, when I was a full-time performer, it was definitely one of them. Working the haunt was actually easier than say, booking a month of shows at different venues, such as happened at Christmastime. Halloween was still quite busy, because I worked the haunt almost every night through the month, but I was still booking other shows during the day and early evenings.

These days, I do not try to book shows, as I am more of a magic builder now. But, I do still manage to get involved with a handful of Halloween events each year. As a builder, I have a busy time leading up to the holiday, as my line of Spooky/Halloween items sell well as other magicians add new magic to their own Halloween shows. 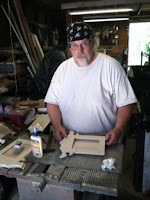 I’ve never been much of a novel reader, but I am a huge fan of technical books. Books on special effects make-up, illusions that lean toward the horror themes, behind the scenes stuff on films, running haunted houses, and obviously, anything on the Spookshow masters like Bill Neff, and the Baker brothers (no relation).

First love is definitely the classic Universal Monsters. I also love the Hammer Films Dracula series with Christopher Lee. I saw most of those at our local Saturday Horror matinee. But, I will always have a place in my heart for the older B horror movies. Our local TV had a Saturday midnight monster show called, “Acri Creature Feature”. As young teens, my brother and I were even on that show as “Creeps of the Week”. To us kids of that era, this was akin to winning the World Series of horror.


What do you consider your greatest accomplishment as a magic/ illusion designer?

I think just being able to make a 30+ year career doing what I love is accomplishment enough. All the milestones along the way are just part of that bigger picture. 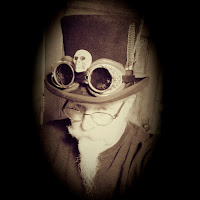 Do you have any advice for new magicians?

Read books. Read books about magic. Read about the tricks, and read about the history. The current trend is to find info online and learn “visually” via video. While there is some good info to be found that way, I feel that books give the magic student a higher level of learning. (Forgive the following gender-specific statements. Both male and female are assumed inclusive.)

The reason is simple. When a magician reads a book to learn a trick, he has no choice but to envision himself in the role of the protagonist. He automatically imparts some of his own character into that role. From that point on, the magic comes from within, and is part of his soul.

When a magician learns a trick by watching a video, he adopts a role of mimicking the person he sees on the video. He becomes an imitation of that other magician, and risks never bringing forth the magic from within himself.


What impact has the internet had on revealing the secrets to magic tricks?

The arguments are relative. Years ago, magicians were all up in arms over books that exposed magic tricks. Decades later it was the video that became the demon. Now, it is the internet. Of course, with the internet, information travels further and faster. But, the amount of information increases proportionately. The information regarding magic is out there for anyone to find it, but by and large, the only people finding it are those interested in magic, and perhaps a few bored people who haven’t yet settled in on better ways to occupy their time. There may be a few of those out there who want to bust the magicians, but most normal people won’t waste their time, and still prefer to be entertained by magic.

The one true problem with magic on the internet is that anyone can post anything, without any governing on quality. There is going to be a lot of crap, but it’s really a bell curve, I think. The bad is balanced by the really good stuff, but most is going to fall somewhere in between.

The way I see it is, most people feel more comfortable in any conversation if they know something about the topic at hand. When the lay public encounters magic on the internet, it gives them more of a reason to engage me in conversation. I see it as opening doors that may not open by themselves. 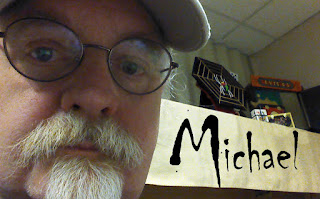 Right now, it’s a balance between working on standing requests and exploring new items to make. My business is the epitome of a cottage industry. Because I work from my home, in a very small workshop, I am limited by how much I can produce at any given time. If I make an item that proves popular, it typically sells out and then I get requests to make more.

But, I don’t want to simply crank out the same stuff day after day. I could get a job in a factory and do that. In order to satisfy the artist in me, I have to be creative. I have to work on new projects that I find interesting. Fortunately, I have been able to do a lot of that. One of my customers, who is also now a very good friend, has over 200 different items that I have made. I don’t think too many other builders can say that… at least they aren’t that crazy! Ha!

If I was to describe myself, it would be to say that I am an artist at heart. I have reinvented myself a few times in my life and explored different vehicles by which to express my art. My early career aspirations were to 1) be a chef with my own restaurant. I then became 2) a performing magician. Now, I am 3) a builder of high quality magical apparatus (fancy term for trick boxes). In all cases, I think I have been successful, even if only as a big fish in several small ponds.