When did your fascination for horror films begin?

I’ve been interested in horror since being a young kid. I liked to be frightened, whether it be reading a scary book, or watching one of the Hammer House of Horrors. But it wasn’t until my 30’s that I really became fascinated with the whole genre after making ‘Before Dawn’ and watching back to back movies at FrightFest!! The fans are so loyal and open minded and really know their stuff.


What was the first horror film you saw?

I’m pretty sure it was ‘The Thing’. If I remember rightly my brother and his mates had managed to get a copy and I snuck in! I was terrified, but fascinated at the same time.


What are your favourite horror films?

There are so many! ‘The Exorcist’ (which I recently revisited) is just brilliant and so well constructed. Love ‘‘Nightmare on Elm Street’ and ‘The Shining’ and one that has really stuck with me is ‘The Orphanage’, directed by Juan Antonio Bayona. It made me go on such an emotional roller coaster of a journey and I still think about it now.  I also loved The Babadouk, again the sensitivity, especially of the mother and son relationship, something I could really relate to. And another Spanish film, ‘Sleep Tight’, probably more of a thriller I guess, but a very clever tense film full of ingenious twists and turns. Then there’s the Soska’s “American Mary” which I loved too - such a strong female protagonist. I have to mention a movie that I have only just watched too – ‘The Autopsy of Jane Doe’ with Brian Cox…

Loads - Stanley Kubrick, Kathryn Bigelow, Alfred Hitchcock, Guillermo Del Toro, David Lynch…the list goes on and on! They all have their own unique gift in telling a timeless story. There is something to learn from all of them. I also must mention George A Romero. Having not previously been a Zombie Horror fan (until we made ‘Before Dawn’) he has to be one of the greatest in that department…with ‘Night of the Living Dead’ being one of the best and most terrifying.


Who are your genre inspirations?

I would say at the moment it’s the women who have pushed the boundaries within the genre. There are many men who inspire me too of course and will continue to do so. but within this genre it has always been very male dominated, so it is great that so many women are coming to the fore and expressing themselves creatively now. For example, The Soska Twins with ‘American Mary’ and Jennifer Lynch for ‘Boxing Helena’, and ‘Chained’. I’m also a fan of Alice Lowe and really respect her work and dedication especially within the genre, crossing again the boundaries of actress, director, writer. 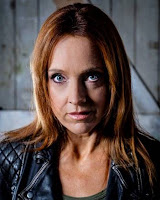 What’s the worst thing you’ve done in a horror film?

Oh I think that has to be in ‘Before Dawn’. I was covered in cold sticky blood, I had prosthetic teeth in, contact lenses (which I could barely see through) and spent hours in a cold dark basement in my pyjamas, totally freezing. However, the shot looked great, so it was most definitely worth it

Yes, definitely. It’s gaining a massive following with the likes of ‘The Walking Dead,’ ‘Penny Dreadful and ‘American Horror Story’, which is definitely paving the way forward.  I think there should be more UK-based horror on TV though…


You and Dominic Brunt, must be the only husband / wife team working in horror films in the UK at the moment. Scary or what?

Most of my friends think it must be a nightmare living and working so closely together but it’s the opposite. Each time we start on a project it’s the start of another exciting journey. We bounce a lot of ideas off each other (not always agreeing on them needless to say!) particularly with stories and characters. We watch a lot of movies together and try to go to as many film festivals as we can together. Dom really knows his horror, he’s like a walking encyclopedia on the genre and I have to say a lot of the more ‘gory’ ideas come from him. It’s a fun, sometimes crazy, scary journey!

Zombies!!! However, ‘What We Do In The Shadows’ gave them a run for their money!


Finally, what really scares you…

Apart from some of the saddening atrocities happening in the world, in a genre sense it has to be my imagination. It’s night and dark…I’m on my own…in my house...I live in a very old house!


An exclusive clip from Adult Babies, introduced by director Dominic Brunt, will be screened on Sat 25 Feb at 18.55, before the screening of Patient Zero.

You can buy Before Dawn on DVD by using the link below.
Dominic Brunt (Actor, Director), Joanne MItchell