Film News (UK): SEED OF CHUCKY, THE DIVIDE & DAYBREAKERS amongst Horror Channel premieres for May

Tim (Barry Watson) is haunted by traumatic memories from his past, linked to the death of his father. Desperate to resolve his issues, he returns to the house where he grew up. But while Tim wants to convince himself the ghostly memories he carries are just a figment of his imagination, he is plagued by a crippling fear that can only be resolved by facing up to the ‘Boogeyman’.  Also features Lucy Lawless.

In the year 2019, a plague has transformed almost every human into a vampire. Faced with a dwindling blood supply, the fractured dominant race plots their survival. Meanwhile, a researcher works with a covert band of the undead on a way to save humankind. This classy chiller is packed with many disparate genre influences, not to mention a fine performance from Ethan Hawke and a truly fun turn by Willem Defoe as a futuristic Van Helsing with a Big Secret.

Students at New England's Pendleton College have their own urban legend -- 30 years ago, a demented professor killed six students and then committed suicide in Stanley Hall. But when a real series of strange deaths begins occurring on campus, assertive student Natalie (Alicia Witt) suspects they're murders based on urban legends and soon realises she's the next number in the killer's body count. A starry cast includes Robert Englund, Jared Leto, Tara Reid, Joshua Jackson and Brad Dourif.

A young woman, Eve (Tina Ivlev), is held captive in the basement of a sexual predator (Richard Tyson). Against the odds, she fights back, and manages to escape her malicious abductor. However, after discovering she may not be the only victim, Eve unravels a darker truth and decides to turn the tables on her captor. A subversive revenge tale with an unusual twist.

A homecoming-night dare turns into a runaway nightmare for a trio of high-school friends who unleash an evil spirit in this terrifying entry in the Urban Legends series from Pet Sematary director Mary Lambert. Abducted by a group of high-school jocks, the trio, although rescued, witness their tormentors falling prey to a deadly but unseen menace. Could it be their imagination or could the spirit of Bloody Mary truly have returned from the grave to seek vengeance? This is the third and final instalment in the Urban Legend series

Fourteen students are murdered and the crime scene offers no clues as to the whereabouts of the one person who could be the only survivor. Months later a gang of robbers screw up their latest heist and mug a couple in a car instead. What they realise too late is that the driver is the killer responsible for the student massacre. Then it’s Psycho vs. Psychos in a taut, tension-laden cat-and-mouse chiller that sees both sides trying to outdo the other.

Billy Boyd voices Glen, the orphan doll offspring of the irrepressible devilish-doll-come-to-life Chucky (again voiced by Brad Dourif) and his equally twisted bride Tiffany (voiced by Jennifer Tilly). Glen heads for Hollywood, where he brings his bloodthirsty parents back from the dead. Much to his horror they go on a spree of murderous mayhem. Cult film director John Waters makes an appearance, as does hip-hop artist Redman. This is the fifth in the popular series of Chucky (Child's Play) horror comedies and is directed by franchise creator and writer of all five films, Don Mancini. 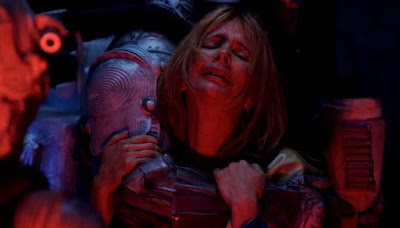 From Xavier Gens, director of Frontier(s), this post-apocalyptic shocker explores the nightmare unravelling of humanity under the most extreme circumstances imaginable when New York City is decimated in a nuclear holocaust. As the survivors sit in the makeshift fallout shelter the ‘divide’ begins. With no one knowing the evil each person in the group is capable of, trust issues arise, paranoia emerges, factions form and values are debased in a brutal and visceral vision of a broken future. Stars Rosanna Arquette, Milo Ventimiglia, Michael Biehn and Lauren German.