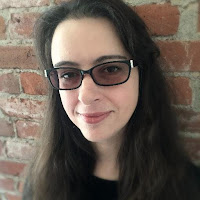 J. Lincoln Fenn began her horror career in the 7th grade when she entertained her friends at a sleepover by telling them the mysterious clanking noise (created by the baseboard heater) was in fact the ghost of a woman who had once lived in the farmhouse, forced to cannibalize her ten children during a particularly bad winter. Strangely, it was the last slumber party she was allowed to have.

I think like all writers, I started out as an avid reader. I was the kid who checked out the maximum number of books from the library and wore holes in the fabric of the couch from reading. Then in college I knew I wanted to tell stories, but wasn’t sure what medium. So I took all the writing classes I could, from poetry, to screenwriting, playwriting, even acting and directing. My work is very dramatic - I look at it as a way to produce a movie in someone’s mind.

The strange thing is I started out trying to write a memoir about my parents’ deaths. And I just couldn’t nail it - it was too close. Then this character, Dimitri, started rumbling around in my head, and I wrote the first paragraph, so I wrote the first chapter, then the next, and these paranormal/urban fantasy elements surfaced, and I went with it. But it still has a lot of narrative details of things that really happened to me.

And then I’ve always been interested in the supernatural - in high school I had a copy of The Modern Witch’s Spellbook, I owned runestones and tarot cards, and as I grew older that interest pointed toward Eastern mysticism. I spent two years living in a Buddhist retreat center. And it seems to me that what we call reality is actually skimming the surface of something else. Fantasy/horror is where you can explore that creatively, and then walk away and say ‘ha ha, just a story, nothing to see here,’ when in actuality, there is.


Why do you think the deal with the Devil is so popular in horror fiction?

It’s interesting that you ask that, because Discover recently posted an article, The Origins of an Ancient Fairy Tale, where researchers think the ‘deal with the Devil’ story could possibly go back about seven thousand years. So it’s been pretty popular for a while.

It’s a story about human hubris and aspiration, avarice and ingenuity. There’s always this struggle between our base instincts and something higher. I think we’re all the characters in our stories - it’s a way to look at our complexity, try to make sense of it.

We’re very imaginative creatures, and we can’t quite be satisfied entirely with reality the way it is. We have to tinker with it, create new and different worlds. It’s also a place for us to look at the things that are too disturbing to look at directly.

The War of the Worlds was H.G. Wells’ attempt to get people to feel the shock and horror of a colonizing force with advanced weaponry and an agenda that’s unknowable. What that would feel like. A straightforward novel about British imperialism might have been harder to connect with emotionally.


What is it about Edgar Allan Poe do you believe is so timeless?

‘Worst ways to die’, hands down. It’s something we all worry about - how we’ll die - and he comes up with ingenious, torturous deaths that you will never, never get out of your head.

The characters. I love it when I have a good idea of how the story will go, and then the characters take shape and change it. Something spooky happens in that I’m no longer the creator, but the recorder of what happens. I know it’s right when what I think doesn’t get in the way, and it just develops, like a photographic print in a chemical bath (yes, back when there was no such thing as digital cameras and dinosaurs roamed the earth).

What we’re afraid of plays a part in the kind of horror we’re drawn to. When I think about British horror, I think about societal collapse or the loss of order, like 28 Days Later, and with American horror we seem fascinated by the bogeyman, probably because we feel vulnerable to random acts of violence.

One of the things I love about British horror is the way it can blend suspense, horror, and comedy. It’s really hard to walk that line, adding a joke into a horrific situation, because it naturally releases tension. When I was writing POE, that was something I struggled with. I watched Shaun of the Dead and Being Human to see how they got away with it.


Do you see differences between the male and female writer’s perspective on the world?

If the writer is really good, it’s something you shouldn’t notice. I’ve read great work by male writers who really capture the experience of being a woman, and vice versa. To be a writer you need a high sense of empathy - the ability to feel another’s emotions. And you have to ruthlessly let a character be their flawed selves.

I had a few readers of POE complain the main character, Dimitri, was a bit misogynistic, (which he is), and then by extension think that I was misogynistic because I ‘wrote’ him that way. Others were surprised to find out I’m a woman because he was so ‘realistic.’ But human experience is human experience - we’re more the same than we are different.

That would be a mighty long list, so I’m going to just point to a few of my new favorites. A Head Full of Ghosts by Paul Tremblay, The Troop by Nick Cutter, John Langan’s The Fisherman, The Devil Crept In by Ania Ahlborn and Harrowgate by Kate Maruyama. All guaranteed to keep you up a bit later at night.

The Grudge scared the bejeezus out of me and Stephen Spielberg’s War of the Worlds always leaves a disturbing taste in my mouth for days afterward. But my favorite popcorn/grab your partner’s hand/horror movie of all time is The Thing. I’d hate to see it remade with CGI.

Just getting published. It is a long, rocky, treacherous road and I’m so grateful to have been given the opportunity to reach so many readers.

Focus on writing the best book you can. Then toss it if you have to, and write a better one. There’s no shortcut, there’s no magic, it’s just a lot of sitting at your computer, typing, and your best move is to write a great book. Yes, social media is important, but if you have to choose between spending a half hour on social media or a half hour on writing, go for writing. It will open doors.

For some practical advice, when you’re writing a query letter to an agent or a book proposal, make sure it’s perfect. I mean perfect. If you write a good book, but toss off a query letter or synopsis that’s less than exciting or has a typo, you’re doing all that hard work a big disservice. Every writer hates writing a synopsis, but make sure yours is polished and interesting. Show it to friends and ask for an honest opinion.

What do you think of the rise in self-publishing?

It can be a great opportunity for people who enjoy the business side of things - I know writers who have been extremely successful with that model. On the down side, there’s so much out there for free it makes it harder than ever to get your book noticed.

Coming out next is The Nightmarchers, a twisty, Lovecraftian-style horror story set on a remote island, and then I’m working on a three-book proposal that my agent will shop around.


For our readers we'd love a paragraph about yourself & your work.

Fenn began her horror career in the 7th grade when she entertained her friends at a sleepover by telling them the mysterious clanking noise (created by the baseboard heater) was in fact the ghost of a woman who had once lived in the farmhouse, forced to cannibalize her ten children during a particularly bad winter.

It was the last slumber party she was allowed to have.

Her most recent novel, Dead Souls, was called ‘wickedly entertaining’ by The New York Times, and Publishers Weekly gave it a starred review, writing that it was “one of the scariest and best to come down the pike in ages....The narrative twists and turns are reminiscent of Dean Koontz or Stephen King at their finest. This story is horribly, horrifyingly awesome.”

In 2013, her debut novel POE won the Amazon Breakthrough Novel Award for Sci-Fi/Fantasy/Horror and became a #1 bestseller in both Fantasy and Horror on Amazon.

The author grew up in New England, graduated from the University of New Hampshire with a degree in English, and lives in Seattle with her family.

You can buy Dead Souls from the Amazon links below.
Dead Souls - Amazon UK