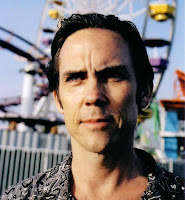 Charles Pinion is a visual artist and director who made the punk rock skateboard zombie movie Twisted Issues (1988), the post-Cinema of Transgression witches in the snow movie Red Spirit Lake (1992) and the gritty San Francisco cannibal movie We Await (1996). His 3D feature Aztec Blood (chapter one in the American Mummy trilogy) premiered at the Revelation Film Festival in Australia (2014).

Wild Eye Releasing has unleashed American Mummy on 3D + 2D Blu-ray and standard DVD out now!
So we sat down with Director Charles Pinion to find out more

Did anyone or anything inspire the film, Charles?

What inspired the film originally, back in 2004, was the title American Mummy. From there we explored different ideas of what “American” meant. One early idea was to set the story in a Native American village. Then we thought about setting it in the Revolutionary War. What does “American” mean? Finally my partner went with the mesoamerican Aztec god Tezcatlipoca, Lord of the Smoking Mirror. That’s who our American mummy is.


Tell us about the Mummy – what it’s motivation in the film?

Tezcatlipoca wants to be fully in his body, so that he can fulfil his destiny. Right now he’s a shrivelled husk, hundreds of years old. The blood ceremony helps him begin to wake up. For him to fully embody, he will need a lot more blood.


Did you model the look of it on any from films past?

No. We did our research based on various archives of Aztec artifacts. The very scary mask that our mummy wears is made from a human skull, which was an Aztec tradition.

And was it all done via CGI?

There was no CGI on American Mummy. We shot the movie in 3D, and 3D CGI would have been too expensive. Every messy effect was there in front of the camera, and often all over us who were behind the camera as well!


Is there anything you did on this one that you wouldn’t do on the next? Or did it all go perfect?

It is very difficult to shoot in 3D. I’m glad I learned so much from the experience, and had so much fun with it, and I’m pleased with the result in American Mummy. Still, it will be nice to shoot in 2D again.


Can you tell us who is distributing and what we can expect from the bonus features component?

American Mummy is being distributed by Wild Eye Releasing. The bonus features are some trailers (one very bloody), a couple of behind the scenes videos (one of them pretty funny), and a short video about our 3D rig, the Polecam.


Is there a sequel?

Yes, it’s always been thought of as a trilogy. Part 2 requires a pretty big budget. Lately I’ve been thinking of making a smaller, less expensive movie that lies between 1 and 2.

Thank you for your time and for joining us today.

Buy from Amazon By Clicking Here  (Opens in a new window)