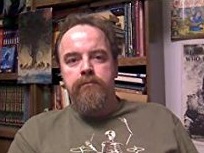 Tim Curran is an American author of horror fiction. His works include the novels Skin Medicine, Hive, Dead Sea, Resurrection, Skull Moon, The Devil Next Door, and Biohazard. His most recent books have been The Spawning, the short story collections Bone Marrow Stew and Zombie Pulp, and the novellas "1867: The Skulleater Campaign", "The Corpse King", and "Fear Me"

Oh, probably when I was 12 or 13. Up until that point my exposure to horror fiction came in the form of movies, TV, and horror comics. It was then I started ordering horror books from the back pages of Creepy and Eerie magazine. That’s when I really started falling in love with it—the Pan Books of Horror, Masters of Horror, Horror Times Ten, the Frankenstein Horror Series, those Dracula paperbacks by Robert Lory. I fell in love with horror fiction then. Before that I read a lot of science fiction, particularly H.G. Wells, Robert Heinlein, Issac Asimov, and those Ace Double science fiction books.

That started even younger. I used to watch Dark Shadows when I was a little kid. Sometimes it really scared me bad, but I loved it. Around that time, I also went to a movie called The Oblong Box with my mom and sisters and it absolutely destroyed me. I was never so scared before. I remember my sisters showing me an ad for it on the back of a magazine…that oblong box nailed shut. I knew something awful was going to be in there. I was terrified of what it might be.

Later on, when I was 8 we had this guy called Alexander, a horror movie host, who came on late Friday nights and showed the Universal Shock package of movies, all the classic ones with Karloff and Lugosi, as well as giant bug movies like The Deadly Mantis and, of course, my personal favorite, the Creature from the Black Lagoon movies! I was hooked and have been ever since. When I was in grade school, all the neighborhood kids would get together and walk down to Main Street to see things like The House of Dark Shadows and Hammer movies. What attracts you to it? Who knows. It’s just in you and when you make contact with it, you’re never the same again. It’s your thing. It sure was mine. Still is.

No, part time. Over here in the U.S. our health care system is shit. You have to work a job to get it. If I lived in the UK or Canada, I’d probably write full-time. I’m sure I would.

I write horror fiction. I’m not too proud or pretentious to say that. I’m proud of the fact. I see it as a very legitimate form of writing. I realize there’s a tremendous amount of shit that comes out, both in books and film, but the small percentage of really good stuff makes it all worthwhile for me as not just a writer but as a reader.

Oh, it’s pure escapism. It gets us away from the troubles, stress, and real horrors that lie beyond the pages. It can be inspiring to see characters in a story go through things ten times worse than anything you ever faced and come up standing. It’s also cathartic, they say. Horror helps us purge negative emotions.

Oh, everything. I think as a kid I was scared of a lot of things—fear of the dark, fear of strangers, fear of being left alone, fear of death etc. All that is pounded into your head by your parents and friends and siblings. I’m sure there’s also a level of instinctive fear involved, too. I channel it into stories. That’s really the yardstick for a scary tale. If you write it alone, late at night, and it chills you, you’re doing it right. Your channeling childhood fears and transforming them into deep-seated adult phobias.


What do you see as the differences between American horror and British horror?

I’m not seeing much distinction between the two these days. There was a time when there was a difference--you know, Stephen King was very different from James Herbert, Ramsey Campbell was different from Jack Ketchum. I think the splatterpunk thing over here in the ‘80’s and the paperback nasties of the UK might have changed that, blurred the differences.

Well, I like the classics, that’s for sure—Lovecraft and Blackwood, Machen and Hodgson and Henry S. Whitehead. I like Stephen King’s early stuff a lot, particularly ‘Salem’s Lot and Pet Sematary. There’s nothing wrong with his new books, of course, but the old ones were more straightforward horror. The Doll Who Ate His Mother by Campbell. Ghost Story by Straub. The first three Books of Blood by Clive Barker. The Totem by David Morrell. The Specimen by Pete Kahle. Ghoul by Brian Keene. Ghoul by Michael Slade, too. I love Thomas Ligotti’s Songs of a Dead Dreamer. Usher’s Passing by Robert R. McCammon. Cold Moon Over Babylon by Michael McDowell. Off Season By Jack Ketchum. The Stake by Richard Laymon. Snowblind by Michael McBride. Light at the End by Skipp and Spector. The list could go on and on, from old things to new things. And if you asked me next week, it would all probably change!

The list would be too long. It would stretch from Karloff’s The Bride of Frankenstein and Lugosi’s White Zombie to the Val Lewton films of the 1940s, Godzilla, Fiend without a Face, and Curse of the Demon in the 1950s to the AIP Poe films and Hammer Films of the ‘60’s to Halloween and The Thing and on and on. A couple in the last few years have really caught my eye—Spring, The Babadook, and especially, The Blackcoat’s Daughter. Just blown away by that one. Like Picnic at Hanging Rock (another of my absolute favorites), you really need to pay attention to subtlety and detail. Wonderful, disturbing movie.

I think it was probably when Cemetery Dance put out my novella, The Corpse King. That was a real thrill for me. When you make it with CD, you know you’ve reached the upper echelon. I don’t mean that to sound egotistical or anything. It’s just that when you reach the level where Rich Chizmar and Brian Freeman pay attention, you figure you’ve done something right.

The best advice is the simplest: READ! Read everything. Not just in your chosen genre, but everything, fiction and non-fiction. Feed your head, expand your mind. Some of the worst horror I’ve ever read is where you can tell that the author is influenced by movies and TV. That’s fine if you’re a screenwriter, but if you’re doing books, then you need to dig.

You need to go back to Poe and the Gothics and climb the ladder up through Lovecraft and Machen and Blackwood right up to King and his contemporaries and onto the current crop of writers. You need to do this. You need to absorb their ideas. I’m sure some writers do fine without doing this or reading outside their genre, but I don’t recommend it. Another thing, and this from my own experience as well, make your writing lively. Don’t let it lay there. Energize it. Create atmosphere and describe what you see in your mind’s eye. Don’t just tell us that a zombie is rotting, tell us how it’s rotting. Subjective viewpoint is everything.

I think it’s a good thing to give people a venue to express their creativity and a bad thing because, well, let’s face it, there’s a lot of really bad books coming out of it. Stuff that would never make it past a legitimate editor. All we can hope for is that for every twenty or thirty bad ones, we can mine one good one.

My projects are currently up in the air. DarkFuse, as you know, is coming to an end. As sad as that is, I saw it as a sign to explore other possibilities, time to begin working with new publishers and try a few things I hadn’t done before. It’s so easy to get comfortable and get in a rut, that sometimes when things like this happen, it can shake you up and get you moving. I’m talking with a couple other publishers right now, so we’ll see what comes of it.

There’s not much to tell about myself, but as far as my work goes, I write the kind of thing I like to read. I’m not sure if this is what others do, but to me it’s the main thing. I have to be passionate about what I’m writing or it just doesn’t work. I really need to embrace my subject matter. When it’s something historical like The Corpse King or Skin Medicine, I can be a very diligent researcher. Every detail is important. There’s nothing worse than a weird western that riddled with historical mistakes or one that draws its inspiration from crappy Hollywood westerns, most of which have nothing to do with the Old West and are pure invention. I use this as an example. I like research. I like finding out things. That’s part of the fun of it for me. An interesting story with a solid background. That’s what it’s about with me.