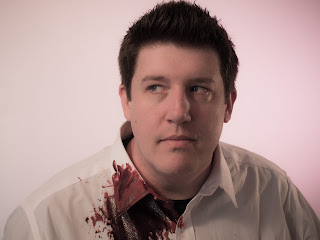 Producer P.J Starks is back with another anthology of ridiculously fun horror with Volumes of Blood : Horror Stories, out August 1 from Dark Cuts. So we sat down with him for a chat.


When did you start making movies – not produced features but just for yourself. As a kid?

PJ: I started when I was around 12. My grandfather went out and bought me a VHS camcorder and that created a monster. I didn’t go anywhere without the camera. I was constantly taping something whether it a family event to hide and seek or skits with friends. It didn’t matter. If there was a possibility of drama or a story to be told, I was shooting it.


Do you remember what you’d shoot on?

It was an old RCA camcorder, which I still have to this day.


What genre did you gravitate towards?

I loved a lot of genre, but if it was something I was making with friends then it was almost always comedy. Comedy was always my second favorite genre so I was always renting things such as Spaceballs, Ghostbusters, Blazing Saddles and the like. My favorite genre was horror.


Always been a horror fan? Any particular type of horror?

Horror always has and always will be my first love. Oddly enough it was Ghostbusters that turned me on to the paranormal and after that I went renting and consuming horror every weekend. Some of the films I watched over and over was Return of the Living Dead, Dawn of the Dead, Rawhead Rex, Friday the 13th and Halloween. I’d have to say the slasher sub-genre is my absolute favorite. The stalk and slash by a masked killer with some kind twist have always been a go to for me. Even now when I’m bored I’ll pop in Madman, The Prowler or Black Christmas just to pass the time. I recently discovered Stage Fright and have fallen in love with it. I guess I just love seeing the different and creative ways the filmmakers come up with for dispatching their victims. Knowing what I do about special effects and having seen it first hands gives me an even deeper appreciation for what it takes to pull off that type of artistry. 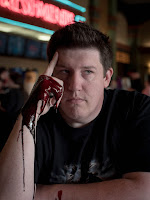 Did your parents encourage you to partake in a career as a filmmaker?

Absolutely. My grandparents bought me the camera and my mom was always encouraging me to pursue what I loved most. I have to give credit to my grandmother Almeda, it’s because of her that I gravitated towards horror. Her and I became scary movie buddies a long time ago. You’d never know it looking at her, she’s like the classic Norman Rockwell apple pie grandmother. But beneath that beats the heart of a true horror fan. She instilled that love for the genre into me.


What was your first produced flick?

The first film I produced that allowed me to get my feet wet was The Confession of Fred Krueger, but Volumes of Blood was the real test. That was the first time I was truly facilitating an entire feature production. I didn’t do it alone, I had some amazing help from my wife Katrina who served as production manager to my now producing partner Eric Huskisson. There were so many facets to that film and I literally had my hand in every single area from script to screen. It was a big learning experience. 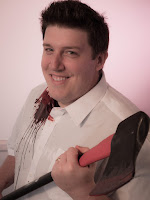 And how did Volumes of Horror come along?

At the tail end of 2013 I created a program called Unscripted at the Daviess County Public Library and it became an overnight success. I’ve since stepped away but has become an annual event at the library. Which I never saw coming and is really awesome. This program led to the creation of the Unscripted Film School, which gave the community of Owensboro an opportunity to participate in the production of short indie films. After the continued success of Unscripted they asked me to come up with something “bigger and better”. I had been wanting to make an anthology film since 2012 and that opened the door for me to do so through this program. In about 8 hours I sat down and conceived Volumes of Blood, which would be a series of interconnected short horror films that would culminate to a feature anthology.


Is it wrong to say it’s reminiscent of some of those old school ‘80s horror films like Romero’s Creepshow? Was that an inspiration?

We never intended the film to be compared to something as incredible as Creepshow or even Tales from the Crypt. Which has happened in several reviews and is wholly flattering. Those films and series definitely had an influence on the ultimate creation, but the real goal was just a bunch of horror fans getting together and making a horror flick for the fans. When I wrote the scripts for the first film and Horror Stories, I infused a bunch of horror nuances and homages. We wanted to incorporate everything we loved about the genre, while taking the tropes and trying some new things with them. What honestly inspired me to make Volumes of Blood, was I was tired of watching anthologies that were nothing more than a bunch of random shorts found on YouTube and slapped together. I wanted something more. That’s where the initial idea came from and it has grown into so much more. 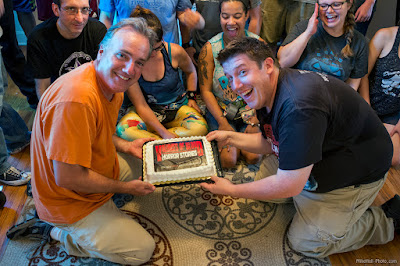 How important a marketing tool has the internet been for the film?

I’ve found that it’s the most important tool when marketing and promoting an independent project. I typically can’t afford the expenses of hiring an outside marketing firm to push my projects so I’ve had to take it upon myself to get the word out. In a lot of ways this led to helping other filmmakers and their projects by coming on as an Executive Producer to offer up my knowledge of marketing and advising in certain creative capacities. The horror community can be one of the most aggressive when it comes to criticisms, but I’ve found that is equally one of the most supportive when it comes to helping push a film. As a producer I do what I can to get myself and my projects out there, hope that others appreciate said films and then enjoy the ride while it lasts.