Poltergeist meets IT in Clowntergeist, premiering on VOD September 12 from High Octane Pictures!

"Emma, a college student with a crippling fear of clowns, must come face to face with her worst fear when an evil spirit in the body of a clown is summoned terrorizing the town she calls home. One by one Emma and her friends receive a balloon with the exact time and date of when it will appear to kill them written on it. After receiving her balloon, Emma realizes that she has two days left to live, and must fight against the clock to find a way to survive."


Why do you think you gravitate towards horror?

This is fascinating to me because I keep expecting to grow out of horror, but I don’t. I keep falling deeper in love with the genre. I’m a sweet Tennessee guy in touch with his emotions who loves to laugh and spend time with family. That’s why it has come as such a shock to every friend, family member, and girlfriend that I’m such a huge horror fan.

I think it’s because of my anxiety. Anxiety disorders run in the family and I’ve been terrified of everything since I was three and four years old. I struggled with phobias my whole life and intense panic. I discovered horror movies as a teenager and they really helped me understand my fears and control my anxious emotions.

As I grew older, I got medical help and got the anxiety completely under control, but my fascination with horror deepened. Fear is such a primal thing, and when the “fear button” is broken in your brain like it was in mine you learn a lot about it! I love taking that knowledge to build thrill rides for people to enjoy! Making lemonade out of lemons, y'know?


Do you remember your first horror movie?

Alfred Hitchcock’s Psycho. I was terrified of horror movies as a kid but was obsessed with filmmaking. When I was 13 I decided that if I wanted to be a filmmaker I would have to watch all genres of movies. I watched Psycho because I thought it wouldn’t be scary since it was in black and white. Big mistake. I was horrified, but I immediately fell in love with the thrill ride a horror movie provided. I watched Cloverfield, Cat’s Eye, and The Invasion that same day and my love was cemented. 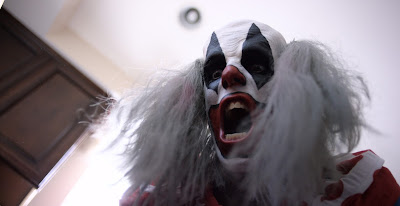 Is it a favorite? If not, what are some of your favorites?

Some of my recent favorite horror movies have been Don’t Breathe, Evil Dead (remake), Oculus, Hush, It Follows, Green Room, Drag Me To Hell, The House of the Devil, The Neon Demon, The Orphanage, and Let The Right One In.

Some of my older favorites are The Creature From The Black Lagoon, The Wolfman, The Haunting, Rosemary’s Baby, The Mummy, Halloween, Scream, The Texas Chainsaw Massacre, Night of the Living Dead, Psycho, and The Thing.


Do you recall the first time a movie had you squirming in your seat?

The first time I saw The House of the Devil I almost had to turn it off. It was the first time a movie truly horrified me. I also remember seeing It Follows in theaters and being hilariously squirm-y.


Would you say any of them – or the directors of those films – have influenced your own work? 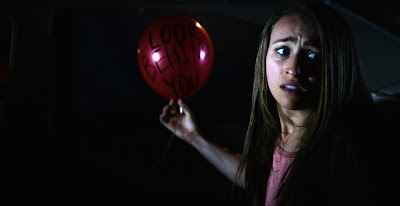 Do you think it’s harder to scare audiences these days?

Nah, that’s a common sentiment but people are people and you will always be able to play with their instincts that make them experience fear. It’s harder to disgust people for sure, but I’m not in the business of disgust. I’m in the business of suspense, horror, and making audiences scream.


In regards to the new film, is there a scene or sequence or a performance you’re especially proud of?

I am so excited about what Eric Corbin did with his portrayal of the clown. It’s so fresh and exciting and new, I think people are going to really enjoy it. I’m also extremely proud of the car chase sequence at the end. The fact that we pulled it off at all is still mind-blowing to me. 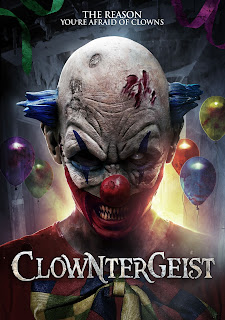 Is there a moment that came together on the set that wasn’t necessarily in the script – or didn’t quite work in the script?

There was a moment that wasn’t really working in the script and I knew I was going to have to work with it on set. I got on set and we ran the sequence and it was, shockingly, incredible! It’s now my favorite sequence in the movie and is all over the trailer (when the clown throws up black bile on Jonah). I was convinced the scene was silly and un-scary and that it would need some major work, but sometimes things come out totally different than you envision them. For better and for worse!


Who do you think deserves more praise for the movie but probably won’t get it? The caterer? The make-up artist? the assistant? The distributor?


Do you think this would’ve been a much different movie if a big studio produced it, and a big-name actor starred in it?

Honestly? Not really. I don’t think we would’ve been able to get away with some of the zanier and gorier things in the movie, but for the most part I was inspired by big studio horror. In fact, I’m hoping to make big studio horror down the road!


How’s the rest of your 2017 looking?
Great! I start production on a new movie in three weeks, which is looking at a summer 2018 release.

Be sure to like me on Facebook (Aaron Mirtes) follow me on Twitter/Instagram (@aaronmirtes) for more crazy clown updates, stories, and behind the scenes photos!
Posted by JD at 13:44