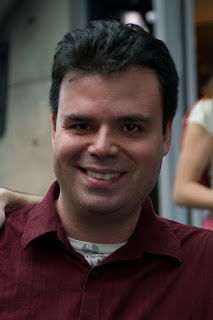 Jennifer Peterson (Danielle Taddei) is having a very rough week. She's been fired from a movie shoot, her manager just dropped her, and her boyfriend dumped her, right after releasing a sex tape of them together.
But Jennifer has decided to turn things around: she hatches a plot she calls "Revenge Porn Revenge," in which she plans to settle the score by filming a devastatingly elaborate video and posting it online, making herself famous in the process. But like everything else in her life lately, her revenge plot doesn't go according to plan, and a shocking trail of carnage is left in her wake.

"A truly timely and Relevant Film" (We are Indie Horror), #FromJennifer on Digital and Cable September 28 from Sector 5 Films.


How many months have you been on the promo trail for the film now?

During the hunt for distribution I spent way too many months waiting to be able to talk about it, so now that I finally get to, it feels like it’s going by too quickly. Everything in the film business seems to go way too slowly or way too fast.


Is it something you enjoy – talking about the movie?

I feel so fortunate that I get to make movies, so I absolutely like talking about it. People who complain about this part of the process seem ungrateful to me.


In terms of the film itself, how close to it are you? Is it like a child you’re sending out into the world?

I once heard Werner Herzog speak about his career, and he was asked how he feels about the mistakes/imperfections in his earlier work, and would he go back and change them if he could. His answer was that he thinks of his films as his children and you don’t love your children any less just because they might have some flaws. I liked that answer a lot. 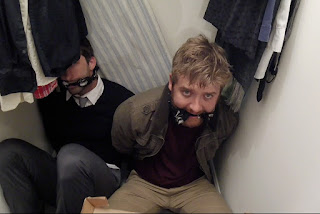 What was it about this particular project that appealed to you?

I got to work with some of my favourite people on this film. Danielle Taddei, who plays Jennifer, went to college with me, as did Aaron Abrams who plays her boyfriend Ralph. I’ve also been friends with Derek Mears for a while, too, and I really enjoyed getting to work with him. I didn’t know Tony Todd before working on this, but Candyman has always been one of my favourite horror films, so it was a real treat for me to get to direct one of my horor idols.


Are horror fans going to dig it?

This film defies the expectations of the genre. It’s funnier than expected, especially Derek Mears and Tony Todd, until the third act. Just when you think you understand the type of film it is, it takes a hard, gory turn than I’m sure horror fans will appreciate.


Was there a check-list of things you HAD to have in the film?

The only self-imposed requirement was a big, bloody climax. The original body count was six, but as we shot the film, I came up with some more ideas for added carnage, and the resulting final body count is now nine. Not too shabby! 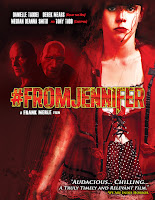 It is comforting to see people covering the movie, and genuinely getting behind it?

Oh, yes! It’s very rewarding. I make movies for the fans, so my worst fear is making a movie and not been able to find an audience. All this coverage will help #FromJennifer find its audience.


They said that a theatrical release is only a ‘promo’ for a VOD/DVD release these days.  What’s your take?

That’s more of a question for distributors, sales agents, and marketing. They crunch numbers and determine that a theatrically released film has more value than a straight to VOD film. In general, I don’t think audiences care about that stuff.


Will we all, at some time, be watching films on VOD only?

Have cars replaced horses as a way to get from A to B? Yes, they have. But you can still find a horse to ride if you really want to, but you might have to drive out to a ranch to do so. Perhaps the extra effect makes the experience even more special. The same might eventually be true for movies. The theatrical experience will never go away entirely.

How much do you love the theatre, though?  The genre film is almost made for it, isn’t there?

For those who enjoy the theatrical experience, it will always be the optimal way of watching a movie, not because of the size of the screen, but because of the communal experience. That’s why scary movies work so well with big crowds, you can hear the gasps and feel the fear of those around you.


If a film of yours isn’t getting a big screen release do you usually try and set-up a screening for it in a theatre anyway? Or get it a festival run? So that those that want to see it on a huge creamy screen can.?

Oh yes, of course. Always. All of my films have been fortunate enough to play at several festivals, and I’ve attended as many of them as I can, because it’s great fun to watch it with audiences.


With film fans themselves being the biggest supporter of sci-fi, horror and fantasy movies, should genre films be excluded from film criticism?

The only problem with film criticism is that so many so-called critics are doing it wrong. Criticism should always be framed as a subjective opinion, as in, how the reviewer felt about the film, what was his or her personal experience. That’s always fair and should be welcomed, whether it’s good or bad. The trouble is, so many reviewers try to make themselves the standard-barer of taste, so instead of saying “I enjoyed this film because…” they say “This is a good film because…” Or of course, what’s worse is: “This is a bad film because…” We’ve all seen movies we’ve loved that were trashed by critics. But I don’t think that’s reason enough to exclude criticism from genre films. I just think critics should do their job correctly.