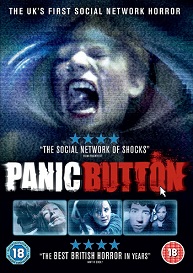 Chris Crow’s ground-breaking, hard-edged psycho-cyber horror thriller PANIC BUTTON gets a remastered launch on DVD & Download from October 23, 2017 and to celebrate with have 2 copies to give away.

Four young people win a trip of a lifetime to New York, courtesy of their favourite social-networking website – All2gethr.com On board the private jet, their mysterious host invites to take part in the in-flight entertainment – a new online gaming experience. But this is no ordinary game. Trapped at 30,000 feet, they are forced to play for their lives and the lives of their loved ones. They are about to learn that putting your life online can have deadly offline consequences and that there no ESC key…

Panic Button, made in 2011, was one of the first British horror films to explore the dark side of social networking and the perils of sharing too much information online. Played out in a claustrophobic, almost real-time situation, the film taps into pertinent social issues that now have a universal significance in the digital age. Themes such as social media crime, identity theft, cyber bullying, voyeurism, peer pressure, child safety and terrorism all come into play, at a time when iPads and smart phone apps were only in there early generations.

Producer John Shackleton reflects:  “iPad’s were not really a thing in 2010 when we were planning Panic Button as the first generation iPad was only released in th US April of that year. We knew we wanted touch screen technology in the jet and so went to great lengths to achieve that despite not having access to that early tech. We wanted our villain to be hiding behind the animated emoji of an Alligator, a subversion of the networking site in the film.  Facial tracking was impossible for us in 2010 so we animated it and comped it together in crude form like he was an early adopter of new technology. Now, with the new iPhone X, anyone can hide behind an animated animal emoji which tracks your facial movements. Scary times indeed!”

You can buy this from HMV UK using the following link that opens in a new window.
Panic Button DVD

Terms and conditions
1. Closing date 30-10-17
2. No alternative prize is available
3. When the competition ends as indicated on this page, any and all entries received after this point will not count and emails blacklisted due to not checking this page first.
4. Winners will be chosen randomly and will be informed via email.