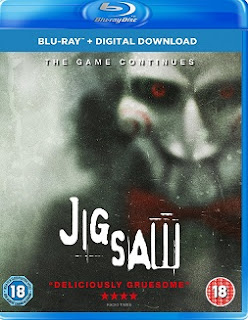 To celebrate the release of Jigsaw on Digital Download 19th February and DVD, Blu-ray, 4k, Steelbook & Box-set 26th February, we have a great competition for you and a copy to give away.

Synopsis
One of the highest grossing horror franchises of all time is back, taking Jigsaw’s signature brand of twisted scenarios to the next level. After a series of murders bearing all the markings of the Jigsaw killer, law enforcement find themselves chasing the ghost of a man dead for over a decade and embroiled in a new game that’s only just begun.

Is John Kramer back from the dead to remind the world to be grateful for the gift of life? Or is this a trap set by a killer with designs of their own? Modernised for new fans, Jigsaw is also highly satisfying for fans of the series.

Terms and conditions
1. Closing date 05-03-18
2. No alternative prize is available
3. When the competition ends as indicated on this page, any and all entries received after this point will not count and emails blacklisted due to not checking this page first.
4. Winners will be chosen randomly and will be informed via email.