Interview with Kelly Green - Director of Attack of the Bat Monsters 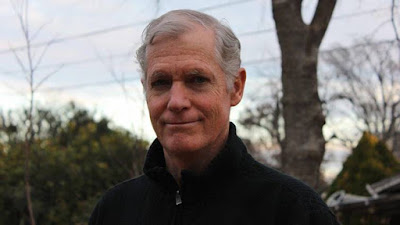 Ahead of the official World Premiere of ATTACK OF THE BAT MONSTERS at Horror Channel FrightFest Glasgow 2018, nearly two decades after it was shot, writer / director Kelly Greene reflects on the film’s long and winding journey, reveals his Christmas movie plans and his inter-dimensional monster creations bent on re-claiming the Earth…


Q: How did ATTACK OF THE BAT MONSTERS come about?

The idea for ATTACK OF THE BAT MONSTERS was generated from serendipitous research into 1950s sci-fi lore for my Master's thesis on post-war Universal science-fiction films. A.I.P. and Roger Corman really stood out. I was struck by Corman's ruthless efficiency, such as using car headlights when generators failed during night shooting; his conflicts with Paul Blaisdell, Paul Birch and method actors; Susan Cabot almost suffocating during the climax to WASP WOMAN; Corman's symbiotic relationships with Beverly Garland, Jack Nicholson, Chuck Griffith, Francis Ford Coppola, ad infinitum. Most remarkable to me was Corman's repeated M.O. of shooting a second film with leftover sets and actors on contract after wrapping early on BUCKET OF BLOOD, LAST WOMAN ON EARTH, and THE RAVEN, which resulted in, respectively, LITTLE SHOP OF HORRORS, CREATURE FROM THE HAUNTED SEA, and THE TERROR.


Q: The film is full of comic evocation of 1950s’ grade-Z grindhouse. Which films particularly inspired you?

For the black-and-white movie being produced in the film. I borrowed generously from ATTACK OF THE CRAB MONSTERS and IT CONQUERED THE WORLD. But there are numerous Easter eggs throughout BAT MONSTERS for history buffs, designed to pay tribute to different aspects of 50s sci-fi. John Carradine's penchant for Shakespeare, wardrobe mishaps on the set of THE ASTOUNDING SHE MONSTER, Lon Chaney Jr.'s drinking woes, Hazel Court's claims of nude scenes shot for European market – many, many others. The dancers' encounter with super adhesive tape was actually a story I stole from a gal that worked at a Texas Renaissance Festival. 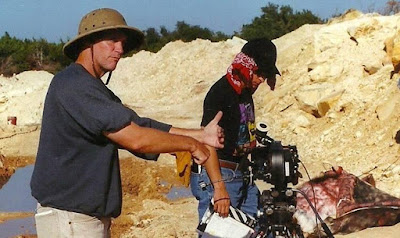 Q: When was the film first screened?

We shot the film in Super 16MM but we couldn't afford to cut the negative for a film print, so I edited the film on BetaSP which is standard definition video. It premiered in L.A. at the Dances With Films Festival, in the summer of 2000 and won the Grand Jury for Best Feature. Corman's Concorde-New Horizon and Arrow Entertainment both liked the movie and offered finishing funds, 30,000 dollars, to cut the negative for a 35MM and/or a DigiBeta master. Remember that format? I turned them both down, hoping to do a straight sale of the film. Remember, those were the days of million dollar deals for no-name films like CLERKS, THE BROTHERS McMULLEN and EL MARIACHI. I just wanted to make my money back! I also turned down Troma. At the time, I was getting requests for VHS screeners from Miramax, Palm Pictures and several smaller distributors.


Q: Was it not picked up for distribution?

No. By 2001 no more offers were forthcoming, so I revisited Arrow, Corman and Troma, who were now “no longer interested.” Lessons learned: One, despite their claims, distributors take rejection personally. Two, find an experienced sales agent, producer's rep (whatever you want to call him/her), let them negotiate. So I put the project in mothballs. Then, Mark Rance, from Watchmaker Films got in touch in 2009, offered to scan the negative and conform to 2K and distribute on DVD, Blu-ray. We signed the film over, mainly because of Mark's offer to upgrade the film for the new HD world.

Q: FrightFest knows Mark Rance as he brought Tobe Hooper’s Eggshells to the festival in 2010. He has lovingly refurbished your film. How did you two work together?

Like most long-distance relationships, it's been difficult. Mark is in London and I work out of Austin. But Mark has two strengths that have tremendous value. First, he's very astute technically when it comes to film-to-digital transfer. Secondly, he's a true cineaste. His restoration of Eagle Pennell's LAST NIGHT AT THE ALAMO was extraordinary. I think he likes the idea of resurrecting films, kind of a Lazarus complex.


Q: Although the film is a wonderful homage to low budget horror and fantasy films, it’s brilliantly crafted and has a very special humour all of its own. Did you set out to write a comedy?

I set out to tell a story about men and women engaged in a mission, almost like a caper film. From that standpoint, I hope it has universal appeal, regardless of the viewer's esoteric knowledge of film history. The majority of the film's action is meant to be amusing, but there are deliberate scenes designed to be purely dramatic and even to produce pathos. We had no budget for rehearsals, and some of the actors came to set with their performances cranked up and manic, as if they were trying to be funny, and I had to squeeze them down a bit.


Q: The acting is consistently brilliant throughout. Tell us about a little about the casting process.

We didn't have the money for a SAG project. I actually built the film around Michael Dalmon, who played Chuck. I had worked with him on numerous video shorts and knew how talented he was. Many of the actors were poached from a film-acting class of an Austin-based instructor named Marco Perella. Check out Marco's work in BOYHOOD – I thought he stole the movie while he was in it. From that class, Fred Ballard, Ryan Wickerham, and Rob Bassetti all understood the less-is-more approach I was after. Kudos to Mark Spacek, my co-producer, who suggested a ton of great actors that I never met until they got to set, like Doug Taylor, Bill Wise, Robert Graham and Maurice Ripke. Mark did a nice turn as Harry, the make-up artist, as well. Casie Waller came in at the last second as Beverly and showed incredible attention to detail. She studied Beverly Garland's films, designed her own hair, and mastered an utterly perfect scream.


Q: Are you excited about it being presented at FrightFest Glasgow all these years later?

“Terrified” is more accurate. We're being screened alongside smart stylish horror films that clearly had real budgets. However, it's truly an honour and this is a bucket-list kind of thing, to finally see the film projected in its full glory in a theatrical setting. Here's the thing – Tom Hennig shot those scenes in the quarry during winter days in perpetual “golden hour” lighting, on 25 ASA Kodak film, usually at F16 or F22, so we're talking minimal grain and depth of field worthy of Gregg Toland. This is a rare instance when a Super 16MM film should look like gorgeous 35MM. I'm interested in seeing how that stock holds up with the faster film we used indoors.


Q: Are there plans to make another film in a similar style?

I originally envisioned BAT MONSTERS as part of a trilogy. The second film, THE BAT MONSTERS WALK AMONG US, takes place in Mexico in the mid-60s, focusing on the Lucha Libre vs. classic monsters craze there, while the third, BRIDE OF THE BAT MONSTERS, would move to Austin in 1974 to explore the environment that produced TEXAS CHAINSAW MASSACRE.


Q: Finally, if not more ‘Bat Monsters’, what’s next from you?

Horror, science fiction and fantasy are my true cinematic loves. I adore certain aspects of the Lovecraftian horror model and I've designed my own series of inter-dimensional monsters bent on re-claiming the Earth, which I'm referring to as “Disciples of the Cosmic Rift.” I've written the first script, called AMERICAN MONSTERS, and I've outlined the other two.

Conversely, I've also been studying the plots and structure of those Christmas movies that have become part of the American TV landscape after Thanksgiving in the U.S. It's truly the hot new exploitation sub-genre, since we're talking about an annual wide-open market of films driven by inherently low-budget scenarios. My hope is to be the Val Lewton of the holiday season, to lure people in thinking they're seeing a silly Christmas romance, then hopefully give them something a little more substantial. Christmas movies have so much potential in that regard. Also, I'm currently in meetings here in Austin with Tom Hennig and another writer-producer-director, Jeff Stohland, to shoot something that we can turn around and get out into this voracious demand for streaming content.


ATTACK OF THE BAT MONSTERS is showing at the Glasgow Film Theatre on Fri 2 March, 3.50pm as part of Horror Channel FrightFest Glasgow 2017. Kelly Greene will be attending.
Posted by JD at 10:30