The first-ever “stoner slasher” film 4/20 Massacre is released on VOD and DVD next month. We speak to writer/director Dylan Reynolds in this puff-y piece.


Now is 4/20 Massacre based on a true story? Something you’ve heard about?

Lol- not exactly based on anything I’ve experienced in my actual life but a couple elements were “inspired by” real world stuff.  For one- the concept of the “weed famer as a slasher” comes from the actual problem that exists in national parks where individuals known as “guerrilla growers” set up illegal marijuana farms that have been known to cause damage to the environment and in some instances these growers have attacked or killed unwitting hikers that have stumbled upon their “turf”.

The second “real world inspiration” is derived from the actual date of April 20th (4/20).  While doing research for the film I found that not only is the day the “official holiday for weed enthusiasts” but the 20th and “late April” have been host to some real-world tragedies- ranging from the birth of Hitler to the Columbine mass shooting.  It was these “coincidences” that got my imagination going and I built upon the concept of 4/20 MASSACRE as a “holiday set slasher film”- or “Friday the 13th… but with weed”.


Would you call it a straight-up horror film or is it a mixed bag of everything?

I like to think we went into making 4/20 MASSACRE with the goal of telling a good all-around story that is both “an indie drama…  but then a killer shows up”- or in other words- creating likable characters that you’d actually care about when they die.  But at the same time it is a fun/ campy/ gory throwback slasher flick.  However-  I didn’t want to make an overtly meta or self-referential film- instead I tried to take the “slasher formula” and actually treat it with some respect and reverence- which from my perspective isn’t often done- especially today.


What makes our villain tick? What gives him his motivation here?

Without getting too much into spoilers I’ll say that I tried to approach “the villain” as I would any other character and come from a place of positivity.  As far as I can tell humans all want one thing: “to love and to be loved”.  So the villain may be doing some awful and reprehensible things in the story- but in their mind they are doing all they can to protect their well-being and those that they love.


What was it about Jamie Bernadette that made her the right woman for the role?

I had seen Jamie in a number of indie films- especially in the horror genre- and I was always impressed with her work and “presence” on camera.  I ended up meeting her at a screening of my last film and over the years we ran into each other and talked while I was developing 4/20 MASSACRE.  She was always my first choice for the role of Jess and I was excited to create a “Linda Hamilton/ Sigourney Weaver”- esque role that I knew she would knock out of the park.


Where has the film been released so far?

On April 3rd folks will be able to buy the DVD on Amazon, Diabolik and a few other places on line.  The chain Family Video will have the DVD available for rent and it can be rented on various VOD outlets including Amazon Video.

Over the next few months we will be rolling the movie out onto other outlets- people can follow our Facebook and Twitter pages for future updates:
https://www.facebook.com/thehikeproductions/
https://twitter.com/Four20Massacre


What do you think US audiences will get from the movie?

Hopefully it will be a fun “roller coaster ride of emotions” for audiences- you’ll laugh, you’ll cry, you’ll jump with fright- maybe get a couple surprises along the way- and maybe even gleam a little more insight into humanity.  We also set out to create a strong ensemble of female characters- something which I think is unique and therefore we will be giving something “a little new” to the genre.
But mainly I just hope people don’t think it sucks. 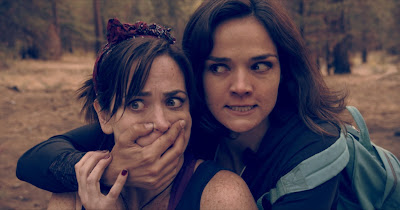