Interview with Christopher A. Micklos and Jay Sapiro 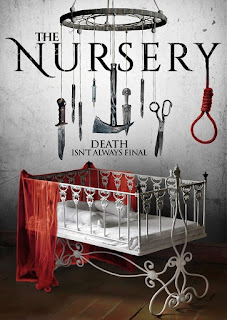 How does one sell their film to a big-time distributor? Christopher A. Micklos and Jay Sapiro, directors of The Nursery, let us in on some of the moves we’ll find in their playbook.


How would you describe the film? What was your pitch to, say, Uncork’d Entertainment?

SAPIRO:  As far as the style goes, we wanted The Nursery to look, sound, and feel like an old‐school, circa 1980 horror classic—the babysitter in peril!—while reflecting and leveraging the technological and cultural realities of 2017. More directly, this is, more or less, how we typically describe the film: When college freshman Ranae agrees to babysit for a family with a tragic past, her run-of-the-mill Saturday night quickly turns into a confrontation with unspeakable horror. Stalked by a sinister presence and haunted by ghosts from her own past, Ranae and her friends must confront an angry, evil spirit determined to hunt them down one-by-one on a deliberate march toward its ultimate prey in The Nursery.

MICKLOS: As Jay said, we have always thought of and described The Nursery as a cinematic throwback to the dark, stripped-down horror films of the late 1970’s and early 1980’s that we grew up on, while channeling some of the concepts and thematic innovations of the subsequent decades. From low budget classics like John Carpenter’s Halloween and Don Coscarelli’s Phantasm to modern indie gems like House of the Devil, the films that have inspired me, personally, the most prioritize suspense over gore, maintain a consistent but escalating sense of desperation and dread, and situate a supernatural narrative in a very real, very recognizable suburban environment. That said, if I recall, our official pitch to Uncork’d was something more like: please, please, please, please distribute our movie!


Is it fair to say that it’s not the traditional, flashy teen horror flick?

SAPIRO: That's absolutely correct. While we drew inspiration from some of the best classic horror pictures, we definitely added character depth and a few spins where you wouldn't expect it. That said, the film doesn't try to be something it's not. We didn't try to be too clever or overreach relative to the story or the promise of the genre. If you like fun, classic horror films that have great jump scares and unexpected plot twists, then I think you'll enjoy The Nursery.

MICKLOS: If it’s not traditional, it’s mainly because of the throwback nature of the film and because the aesthetics that inspired us are necessarily those that are considered so run-of-the-mill today. That said, we certainly are aiming for a younger audience in their teens and twenties, which is a pretty fertile audience for a film like this and one that has been essential to support the horror genre over the years! I think, though, that what sets us apart a bit from the standard low-budget, indie horror fare aimed at this audience is a few things. One, we aren’t exploitive at all in our approach to the material or the cast. There is some blood, yes, but we didn’t set out to make a gore fest…and while our cast is primarily female, we didn’t find any excuse possible to get them out of their shirts and bras. So that’s different, right there. Second, we didn’t want The Nursery to be winking at the audience or to constantly be wanting to show the audience how smart we were or how much we think we’re better than the genre, which is a trap that I think a lot of horror movies fall into these days. I love horror. I don’t need to be better than the horror genre! As far as I’m concerned, there isn’t anything that IS better than the horror genre. So our movie is very straight-forward. We respect the genre, we respect the audience, and we simply set out to make a fun, engaging horror film that we thought we would enjoy ourselves!


Are either of you parents? Is that what motivated this narrative?

MICKLOS: All of us, actually, are parents: Jay and I, and then our third partner, Glenn Chung, who was instrumental to The Nursery every step of the way. Of the three of us, I’m the newest father: my little girl was about two years old when we started the movie, whereas Jay’s and Glenn’s kids are much older. So, I’d say that while my experiences having a baby at home certainly inspired some of the creative ideas and images that ended up in the film, the story really originated from the idea that we wanted to make that old school, 1980-ish feeling horror movie…and some of the most effective movies of that era were the babysitter-in-peril movies, as I mentioned earlier. So, that was probably the bigger influence on the direction of the narrative than any personal experiences I or any of us had as parents. We started with the babysitter-in-peril thing, and we also knew that we wanted to weave in technology as much as we could. So, when you watch the movie, you have all of the action and activity with devices—phones, iPads, computers, etc.—throughout the film. And then we hammered out the story!

SAPIRO: I think that all of us being parents definitely helped us as we developed the concept, but that wasn't really our starting point.  Glenn, Chris and I have been talking about making a feature length film for years. We had a couple of starts on other movies, but nothing really materialized.  So, at one point a couple of years ago, we simply agreed that it was time to make it happen. For my part, I would sit at my place and think about what we could produce on a micro-budget that would have the same impact as a feature film with deeper pockets. I have large windows where I live, so I’d grab an erasable marker and just write idea after idea all over my windows. I’d then take those ideas to Glenn and Chris. We’d kick my concepts around along with all the ones that they brought to the table. In that crazy collaborative process, the idea for The Nursery was born.


How easy is it to co-direct a movie? C’mon, be honest!

SAPIRO: For us, it was second nature.  Anyone who knows us will tell you that Chris and I share a brain. We think alike, work extremely well together, and balance each other out when it comes to this type of work. So directing together was really an easy and obvious choice.

MICKLOS: Yeah, I hate to be boring, but it really wasn’t that hard. And, in fact, in our case it made for a better movie. Jay and I have been working together for twenty years, and we were close friends even before that. So, ninety-nine times out of a hundred, we both know exactly what the other one is thinking, we can anticipate how the other one is going to respond to an issue that comes up or a challenge that we’d have to face, and we can communicate about as well as any two people you could ever name. So, in many ways, co-directing was a natural fit for the two of us. That said, there are certainly times when you don’t see a scene the same way, when you have a different idea of how a shot sequence should play out, and so on and so forth. So, when that happened, if we had time, we’d shoot it both ways and then revisit it in post-production, where we pretty much always agreed on which approach ultimately worked best. Or we’d simply, walk over into a corner or another room and talk through our differing ideas…and then come back talk to the cast and crew with one voice.

What do you believe your individual strengths are?

SAPIRO: Well, I can bend a spoon with my mind! Oh, that's not what you meant. Joking aside, I honestly think we're the perfect team. Chris has an amazing ability to take a concept and flesh it out to a fantastic script, I have a knack for producing media, and Glenn is incredible with design and special effects. Some of our strengths do overlap, and we crossover now and then; however; when it comes to filmmaking, we try to focus on what each of us does best.

MICKLOS: That’s a great question…and one that’s hard to answer without sounding like an arrogant ass! So, they only thing that I’ll really say on my own behalf is that, as a lifelong horror fan, I think I bring a lot of knowledge to the table of the genre, its history, its philosophy and psychology…and also audience expectations and so on. And all that plays into the decisions you make at every stage in the process of making a horror film.


Tell us about the production company. Got a lot on your slate? When did you create it?

SAPIRO: Well, we have two. One, Visuality, has been around for more than 20 years. We produce ads and video, place media online and with traditional outlets, create websites, consult, etc. Our other firm, Three Tortured Minds, was formed when we made the leap into the feature film universe. The Nursery is our first film under the Three Tortured Minds banner. We have another movie in the early stages of development, and that one—as well as all of our future film-related projects—will be a Three Tortured Minds endeavour.

MICKLOS: Not much I can add to that! So fade to black…