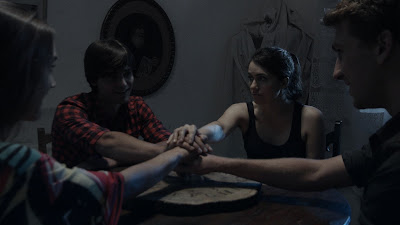 Ouija Séance : Origin of Evil filmmaker Andrea Mugnaini explains that she’s always been fascinated with the world of the paranormal.


How long have you been on the film for now, Andrea?

I was 19 when I was attending the first year of “science of communication” at the University of Florence. In the café of the University there was an advertising poster of a local film school that often caught my attention. I decided to go and take a look, a few months later I shot my first short film and now that I’m 36 I’m still shooting.


Was it an idea you came up with?

Yes, I’ve always been very fascinated by the world of paranormal since I was a child.
Once, at a dinner party, I had the opportunity to chat with a girl who had personally experienced a Ouija session that had gone wrong. She was really shocked by the incident and her story struck me deeply. I few days later I started writing the script.


Where did you get inspiration from?

After the first chat with the girl at the dinner party I interview many other people. I wanted to speak with different people to observe as many points of view as possible regarding this phenomenon. So, during the first year of researches, I spoke with people of different nationalities, ages, religion, culture, and social status. The amazing thing is that their stories were all very similar despite the big differences of the interviewees.


Did you have to do any research into the world of Ouija boards and communicating with the afterlife?

To get a more scientific opinion on this phenomenon I also wanted to talk with a couple of psychologists. I was very happy to find out that one of them had a direct experience with a Ouija board. It was not easy to convince him to talk about his personal experience but in the end the information I gathered was very important for the development of the script.


What were your initial plans for it? To sell it to a studio or did you always intend of doing it independently?

I always intended to do it independently, from the beginning of the project, in order to maintain control over the film artistically and productively.


Any hiccups along the way?

When you shoot an indie movie it’s very normal to get some hiccups along the way I guess. In any phase of production we encountered some problems, sometimes bigger sometimes smaller but I must say I got an incredible crew for this project and all together we have solved all the issues. In particular I’m very grateful to Monica Sperandio, the executive producer, without her this project would have hardly seen the light… she always found the right syrup for each type of hiccups.


How did you go about getting distribution?

After the long phase of postproduction I went to “Le Marché du film” during the Cannes Film Festival. Was my first time there cause “Ouija Séance” was my first movie produced for an international distribution and everything was a new discovery for me. So I filled my backpack with an hard disk containing the movie, a PDF of the project and a lot of hope. This is when I met Galen Christy, the founder of High Octane Pictures. We were in tune from the beginning  and I loved his enthusiasm and his ideas about the distribution of OUIJA SÉANCE . I’m very happy to have chosen High Octane Pictures and very proud to have been chosen by them.


Some beautiful locations there. Which city was it shot in?

The movie is set in Italy, my wonderful Country,  and more precisely in Florence and Vallombrosa, an amazing ancient forest not too far from the town. Vallombrosa translated means literally shady valley and it’s a place with an unique atmosphere. It’s an area rich of legends and folklore so it was the perfect location to set my movie. Despite the difficulties to shoot in a place with practically no streets, no electric energy, no hotels or restaurants within many miles, I really wanted to capture that atmosphere with my camera.
Also, the Villa where it takes place a big part of the movie it’s been the witness of a brutal murder back in the 80’s and I could breath some kind of energy there.. hard to explain, but definitely that was the perfect location for my movie.


If you were going to watch Ouija Séance : The Final Game in a double feature with another film, what would you consider be a perfect second film?

The perfect second film would be “Profondo Rosso” by Dario Argento, probably the best Italian horror film director. “Profondo rosso” means “deep red” and despite the fact that it’s been released more than 40 years ago it’s still very modern in its language. I think that this movie deeply influenced me and increased my passion for horror genre. The use he does of music it’s incredible and I think that it’s a must see for all the horror fans. 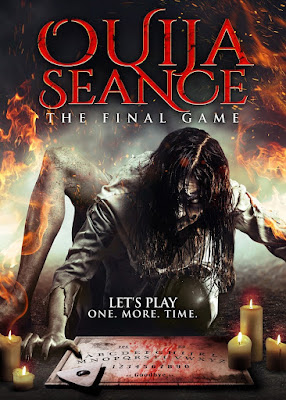