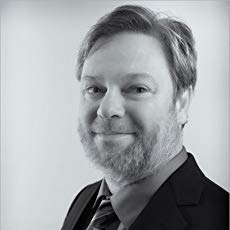 David Kempf has written over fifty short stories, many with themes of horror fiction. He has won several writing awards including first place in Millersville University's Lemuria magazine's short story competition. Two of his short stories were selected for the 2007 publication of The Grackle.

In 2014 he wrote The Horror of It All, featuring interviews with prominent figures in the horror community. All the proceeds from that book went to help those suffering from ALS.


So this is your fourth novel?

Yes. Dark Fiction, The Petsorcist, Travel Bug and now this one, Damned Fiction.


With a title like Damned Fiction, I assume this is finally the official sequel to Dark Fiction.

Yes. This new noel Damned Fiction is an official sequel to my first novel Dark Fiction. Although one of the characters (Dr. Henry David Wells) is in The Petsorcist, it is not a sequel to Dark Fiction. Christopher and Dr. Wells (from Dark Fiction) are mentioned in Travel Bug but once again, it is not a sequel. Damned Fiction takes place about a few months after the events of Dark Fiction. This time out, Dr. Wells and Christopher do not have to deal with the evil wish masters known as the Jinn. They must deal with the Devil himself who is interested in finding a writer worthy to write his biography. Thus the title Damned Fiction.


Dr. Henry David Wells is the central character once again. Why?

I suppose because he is my most intriguing character. His Faustian bargain with evil forces in the first novel made him interesting. Now he is literally about to do a deal with Satan himself, with the Devil. He has unnaturally long life, the man fought with the British during The Revolutionary War. Now he is an American college professor and bestselling horror author. He is an extremely promiscuous man as well as a tragic hero and everyman. Wells is the opposite of Christopher who is essentially goodness incarnate. Christopher is the Christ figure, just like his name he is the Christ-bearer, the hero, the force of good. Not Wells. He is good and evil coexisting. There is simply no other character I enjoy writing about more than Dr. Wells.


Tell us about how you came up with the premise for this one.

Well, I thought about how Dr. Wells has already made a Faustian deal with the Jinn so it would only be a natural progression to take the next step. To watch him deal with the Devil himself. I also assumed that if Satan returned to earth he would want to have the number one bestselling book on Amazon. I thought that would come natural to us just like it does to all of us. There is also another key element with the Sarah character and what she writes about. I want to keep that a secret for now. Christopher’s goodness and selfless nature also plays a key role in fighting against Satan’s plans but I hope people will read the book to find out for themselves what I mean.

I honestly don’t know. It’s fantasy, horror, science fiction, drama, comedy and tragedy all mixed in together. It’s whatever works and whatever I need at the time.


Why do you think people are so fascinated by the Devil?

Funny you should ask that. I was just watching The Exorcist again the other day. The movie never gets old. I mean people are afraid of the unknown and we don’t want to take full responsibility for the terrible evil that humans inflict upon each other. Men have been slaughtering each other for thousands of years. We don’t want to blame nature so we need to blame a supernatural being that influences us if we will it or obey it or whatever. Believing in the devil preys upon our deepest fears of an invisible world in this world and the one that is to come. The Devil is also a symbol of man’s vanity and this narcissistic culture is fascinated by fame more than fortune these days. So I can see many people who would sell their soul to him for glory. I know Dr. Wells would at least be willing to hear the Devil’s presentation!


What your favorite stories and books about Satan?


What are some of your favorite films dealing with the Devil?

The Exorcist, Rosemary’s Baby, The Ninth Gate, The Devil’s Advocate, Angel Heart, The Omen, Bedazzled, Legend, John Carpenter’s Prince of Darkness, Spawn, Legend and Needful Things. The irony is that movies like The Empire Strikes Back, The Lord of the Rings: The Two Towers and The Dark Knight were bigger influences on this novel. That’s because these films were all important central parts of a trilogy or even sequels that could stand on their own. In that way I guess I hope this book is similar to The Godfather Part 2.


So the Devil wants to be the number one bestseller on Amazon?

I think that goes without saying.


Is this straight horror or a mixture of comedy and horror like your previous book The Petsorcist?

There is some tongue and cheek stuff, yes. I mean, come on, the Devil has been done to death. He has been done to terrify, enlighten, educate, warn and entertain. He has been used by religion to scare people into submission and by writers and playwrights as a punchline to make people laugh. I chose to walk a line in-between to make the reader laugh uncomfortably throughout the novel. That was my desired goal anyway.


Why the release date of May 5th?

I am superstitious so I just thought I would get it out on Smashwords anyway on May 5th. That is when Anne Rice published Interview with the Vampire in 1976, one of my favorite novels.


Why did you choose to write actual people as characters in this novel?

Oh, like real life writers and artists? Yes, I thought that would be a nice touch. Something interesting, you know. It’s a longstanding literary tradition like making fun of real life people who have wronged you as thinly disguised characters in your books. In this case, though, I use the actual names of real life people I admire and look up to. Jon Donnis, the editor of Masters of Horror U.K. comes to mind. As for thinly disguised characters with a different name used for petty vengeance, I think we know I am much too mature for that sort of thing.


Why are you choosing to make the novel permafree on Amazon?

It’s not like I am a household name or anything. A free book could possibly attract readers to my other work. It’s kind of my gift to readers of horror, fantasy and science fiction.

I will be working on promoting The Wisdom Tree, a children’s book about addiction I wrote with my eight-year-old Andrew this summer.

There is a laundry list, I think. I have a book that pays tribute to Arthur Machen, a very dark novella about a comedian on house arrest, a novel about a psychotic novel editor, lots and many unedited books. I wrote the first and second drafts but never actually bothered finishing getting the final edits done. In a weird way, I think I have already finished my life’s work; I just have to essentially get the stuff edited. Before I bother with that, I will finish up with the sequel to Damned Fiction, to really conclude the storyline of Dr. Wells, Christopher and all Faustian dark fiction literary bargains. The working title of the novel is The Wage of Sin.