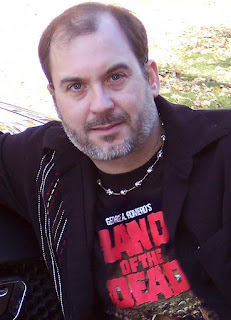 "John Everson is the Bram Stoker Award-winning author of the novels Covenant, Sacrifice, The 13th, Siren and The Pumpkin Man, all released by Dorchester/Leisure Books in paperback and by Delirium, Necro and Bad Moon Books in limited hardcover. His sixth novel, NightWhere, was a 2012 Bram Stoker Award Finalist. The Family Tree, NightWhere and Violet Eyes, his "creepy spider novel" were released from Samhain Publishing. In January 2017, Redemption, the long-awaited sequel to his novels Covenant and Sacrificewas released. His 10th novel, The House By The Cemetery will be released in October 2018 from Flame Tree Press."

I’ve been interested in writing since I learned to write! I was a voracious reader as a kid, and early on, I realized I wanted to do for other people what my favorite authors did for me – take them to a new and strange place, and hopefully put them on the edge of their seat a few times. Give them an escape from the everyday. I thought authors were the most amazing people because they could create entire worlds … and then take me to them.

While I read mostly science fiction growing up, when I began to “tell tales,” it always seemed like I came up with stories that had a dark twist at the end. Even my alien tales ended up twisted endings. I realized early on, that my natural predilection as a creative was to explore “the dark side” vs. intergalactic intrigues.  After writing some stories in a creative writing class in college (which the instructor criticized as being “too much like Stephen King”) after college I began writing some more stories on the weekends and submitting old and new pieces to magazines. When acceptances started coming in… I started writing even more.

I published with a variety of magazines from 1994-2000, one of which was Delirium Magazine. When that publisher decided to launch an independent book line, they offered to issue a hardcover collection of the stories I’d been publishing throughout the ‘90s. The result was Cage of Bones & Other Deadly Obsessions, my first book. I went on to publish my first two novels with Delirum as well – Covenant and Sacrifice – along with a novelette – Failure. And then Leisure Books offered to reissue both of my first novels in mass market paperback… and suddenly I was reaching tens of thousands of readers rather than only a couple hundred. It was an exciting time!


Did studying journalism help you as a fiction writer?

I would guess so. It helped teach me the importance of clear description and not “burying the lead.” Get to the point early, or you lose people. So I don’t think I’m an overly “flowery” fiction writer – because I don’t spend a page describing the room. Hopefully that means I move the tale along quickly.

How did winning the Stoker Award change your life?

It helped give my work some credibility. My name was starting to become a little familiar to genre fans at that point, because I’d had dozens of stories published over the past 10 years, but the award certainly helped build on that reputation. I’m sure it helped in the decision to give my novels a shot at Leisure Books, and I know for sure the award gained me my first publishing deal in Poland – a publisher there approached me specifically because of that. They translated Covenant and released an initial pressing of 3,000 copies in Poland in 2007 – at a time when it was only available in the United States in a 250-copy limited edition hardcover. So at one point I had more books available in Poland than I did at home!

I wish I thought that horror books were popular. While Science Fiction, Fantasy and Mystery genres all have dedicated sections among the shelves of Barnes & Noble stores, horror is ignored – it’s relegated to the ghetto of the general fiction shelves… which means if you’re looking for a “horror” book in B&N, you’ll have a hard time finding it, unless you know what you’re looking for. Horror has long been one of the poorest selling genres in book form, despite its popularity in film.

Life! I see things and sometimes an image or a news story or the words someone says trigger the what if…? factor in my brain. I think about “what if” and suddenly I’m down some twisted story path. There’s no better answer than that really. Sometimes the mind just comes up the best “worst case” scenarios.

Edward Lee’s early novels like Succubi, Incubi and Coven had me reading them in just one sitting. That’s the sign of a perfect novel to me – the book you simply can’t put down. I remember reading his City Infernal in a single day one 4th of July. Clive Barker’s The Damnation Game and Great and Secret Show were big novels for me too, as were Anne Rice’s The Witching Hour, Exit To Eden and Vampire Lestat. And of course, Stephen King’s early books like Carrie, Firestarter and Pet Sematary.

It was a big thing for me to finish my first novel – Covenant, because I kept losing faith that I could ever finish a novel and I’d put it aside for months at a time. To have that book win the Bram Stoker Award when it was finally published… was amazing.  I think creatively the greatest thing for me was writing NightWhere. I first thought of the idea for the novel while writing Covenant… but it took me a decade before I was brave enough to write the book because of the extreme themes. So that book was a challenge to write because of what it was. And then that became a Bram Stoker Finalist and a bestseller for me in translation in Germany. So those two books are important milestones for me.

Write! Everyone talks about writing, but you only produce publishable pieces – and hopefully improve your craft – by writing. Every week. Some would say every day, but I’ve never had the time to do that. I do write creatively a day or two at least every week though. It can also be really instructive to read your work aloud either to yourself in the mirror, or better yet, at open mic nights where you can gauge the reaction of the audience. There’s nothing like seeing an audience react to – or not react to – the things you think in your head are genius. It’s really instructive for the editing process. You’ll hear extraneous words or gawky dialogue in a way you never will sitting at your computer typing them.

It’s easy, and instantly gratifying… but largely a dead end. Just because you can publish something on your own, doesn’t mean you should. At the end of the day, if you want to reach readers, you need credibility and a marketing machine behind you to expose your work to people. Self-publishing is great if you want to say you wrote something and it’s available. But that’s the easy part. Getting people to read your book when there are millions of book choices out there is the hard part. A vast amount of self-published work is poorly edited, with amateurish book covers, and has no marketing to get it exposed to readers… so it will wallow in obscurity, even if the story is really good work. There are exceptions, surely. But if you want a true career as an author – convince a real publisher to put money behind your work.

I’m working on my 11th novel, titled The Devil’s Equinox. I’m planning to have it turned in to my publisher by Christmas!

You can sum me up in less than ten words -- I like hot peppers and old horror! I always say that I’m a staunch advocate for the culinary joys of the jalapeno and an unabashed fan of 1970s European horror cinema. I’m the author of ten novels, including the latest The House By The Cemetery, which takes place at a real haunted cemetery -- Bachelor’s Grove -- in the south suburbs of Chicago. My first novel Covenant, was a winner of the Bram Stoker Award and my sixth, NightWhere, was a finalist for the award.  Other novels include Redemption, the conclusion to the trilogy begun in Covenant, as well as Violet Eyes, The Pumpkin Man, Siren and The 13th. Over the past 25 years, my short stories have appeared in more than 75 magazines and anthologies. I’m also the founder of the independent press Dark Arts Books and Ihave written novelettes for The Vampire Diaries and Jonathan Maberry’s V-Wars universe (Books 1 and 3), the latter of which is currently being developed for NetFlix. I’ve also written stories for The Green Hornet and Kolchak, The Night Stalker anthologies. I have had several short fiction collections published, including Needles & Sins, Vigilantes of Love, Cage of Bones & Other Deadly Obsessions and most recently, Sacrificing Virgins. For more on my obsession with jalapenos and 1970s European horror cinema, as well as information on my fiction, art and music, visit www.johneverson.com. 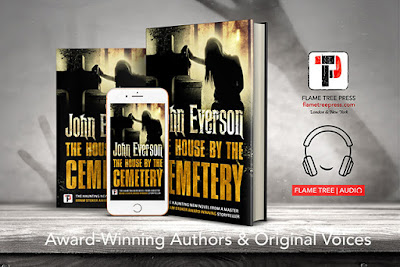