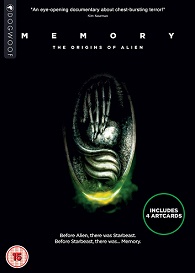 Memory: The Origins of Alien is out on DVD on September 2nd.

And to celebrate we have a great competition for you and 2 copies to give away.

Synopsis
The iconic scenes and sequences from seminal sci-fi horror ALIEN are firmly embedded in film history and popular culture: the creepy eggs and HR Giger designed spacecraft on a long dead planet; the pivotal facehugger attaching itself to one of the crew of the Nostromo; the shocking chest-bursting sequence and much, much more…

But while we may all now know that "in space, no-one can hear you scream", how did Ridley Scott and the creative team come up with the ideas for a blockbuster that changed both the horror and sci-fi genres and truly terrified audiences around the world?

As we approach the 40th Anniversary of the game-changing film a fascinating feature documentary MEMORY: THE ORIGINS OF ALIEN, from writer/director Alexandre O. Philippe (78/52: Hitchcock’s Shower Scene), uncovers the origin story behind Scott’s cinematic masterpiece, which arrives in cinemas on 30 August 2019 followed by DVD and on demand on 2 September from Dogwoof.


Buy from Amazon by clicking here (Opens in a new window)

Terms and conditions
1. Closing date 09-09-19
2. No alternative prize is available
3. When the competition ends as indicated on this page, any and all entries received after this point will not count and emails blacklisted due to not checking this page first.
4. Winners will be chosen randomly and will be informed via email.
Posted by JD at 09:11