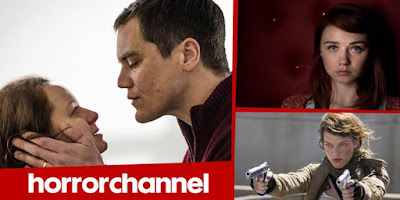 There are also Channel premieres for the 2019 version of CABIN FEVER, a remake of Eil Roth's 2002 film and written by him; Scott Derrickson’s supernatural chiller DELIVER US FROM EVIL, starring Eric Bana, futuristic survivalist thriller THE JURASIC GAMES, fiery revenge horror THE BURNING and Milla Jovovich is back in RESIDENT EVIL: EXTINCTION, the third chapter of the hugely successful Resident Evil franchise.

A forest-dwelling hermit discovers his dog has died from a mysterious illness and gets sprayed by its infected blood. Meanwhile, five young friends, fresh out of college, have rented a cabin in the same woods for a week-long vacation. It’s not long before the group have to face the horrors of a flesh-eating virus …

Samantha Morton and Michael Shannon play married medical professionals Katharine and Richard who keep their sick son Andy isolated from the outside world in their remote countryside house. When young Maryann moves in with her grandparents close by, her attempts to befriend the clearly lonely Andy are met with vehement resistance. But Maryann finds more inventive ways to circumvent their watchful eyes until one day she is forced to hide in the house and discovers the basement. There she finds a terrible secret… but even then can’t imagine the shocking truth behind it.

Michael (Elliot James Langridge), jobless and down on his luck, is irresistibly drawn into Manchester’s seedy underworld. After getting a job as a doorman at Cloud 9 massage parlour, he is lured into a secret subculture and groomed by his new ‘family’, who have a dark secret; a bloody addiction that they intend Michael to share.

New York police officer Ralph Sarchie (Eric Bana), who is struggling with personal issues, begins investigating a series of disturbing and inexplicable crimes.  He joins forces with an unconventional priest (Edgar Ramírez), schooled in the rituals of exorcism, to combat the frightening and demonic possessions that are terrorising their city.

Every year, ten of the world’s most dangerous criminals are chosen to compete for their freedom in The Jurassic Games, a virtual reality television show where contestants must survive in a world full of velociraptors, t-rex's and other ferocious dinosaurs. Die in the game, and you die in real life.

At summer camp, some teenagers pull a prank on the camp's caretaker, Cropsy (Lou David). But the joke goes terribly wrong, and the teens leave Cropsy for dead after setting him on fire. A few years later, the burned and disfigured caretaker returns to camp equipped with his trusty shears, ready to unleash his particular brand of vengeance…

The anxiety of rush week turns into sheer terror when sisters of a sorority are slain—and turned into dolls— by a serial killer. New pledge Riley (Lala Kent) and her best friend Becks (Mia Frampton) must endure late-night hazing rituals as the murderer watches and waits. Can she uncover the terrible secret shared by parents before becoming a victim herself?

Survivors of the Raccoon City catastrophe travel across the Nevada desert, hoping to make it to Alaska. Alice (Milla Jovovich) joins the caravan and their fight against the evil Umbrella Corp and their plan to replace humankind with a race of undead clones.