Competition: Win Under The Shadow on Blu-ray 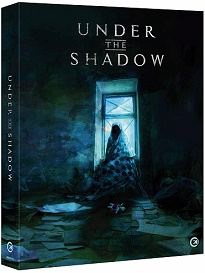 Under The Shadow is released on Blu-ray on February 10th.

Synopsis
In 1988 Tehran, Shideh's attempts to rejoin medical school are thwarted as a consequence of her politically active history. Her husband is sent off to serve in the Iran-Iraq War while Iraqi air raids draw perilously close to their own apartment. As neighbours and friends flee from a city in chaos she is left alone with her daughter Dorsa who becomes increasingly ill and seemingly disturbed. Shideh initially dismisses her tantrums over a missing doll but is soon terrified they've been targeted by a djinn - a malevolent spirit that steals from those it seeks to possess.

Terms and conditions
1. Closing date 17-02-20
2. No alternative prize is available
3. When the competition ends as indicated on this page, any and all entries received after this point will not count and emails blacklisted due to not checking this page first.
4. Winners will be chosen randomly and will be informed via email.