Interview with The Soska Sisters

The Soska Sisters on the set of VENDETTA with Dean Cain

Ahead of Horror Channel’s UK TV premiere of VENDETTA (part of the VENGEANCE season), the Soska Sisters reflect on their life-long love of wrestling, getting revenge, and their next, long-waited original film BOB.


You’re back on Horror Channel. Excited?

Jen: Deliriously. We love the Horror Channel! It's our favourite place to be. Thank you for having us back!

Sylvia: LOVE the Horror Channel. It feels a little odd because you guys usually are the first to show our work and Vendetta showed up late. I won't even begin to mention the long-awaited Hellevator.


Finally, your UK fans get to see VENDETTA on British TV!

Jen: I'm so happy it VENDETTA has finally invaded British airwaves. The UK has always been so gracious and supportive of us and our work leading back to the Dead Hooker in a Trunk days. It's only fitting to have VENDETTA follow suit. It's no secret we love our British fans and hold a special place in our hearts for them. I'm excited for them to finally be able to enjoy what I like to call our "Punisher" movie.

Sylvia: Maybe it's happened because the UK has been the most supportive of our work, so Vendetta is now going to be a smash hit and we can finally get to work on the sequel. See who hasn't been horribly murdered and there's still a vendetta to take them out. We're pretty excited to see what the reaction to the film will be - we have a lot of fun directing action and working with these incredible stunt teams.


VENDETTA was the second film you made with WWE Studios (SEE NO EVIL 2 being the first). What made you want to step back into the ring with them?

Sylvia: It was part of Lionsgate Films' action six-pack which was six action films. We did so well for them on See No Evil 2, they wanted us back. I'm not sure on which side, but someone asked if they wanted to hire girls for their action films and the reply was you've obviously never seen a film by the Soska's before. 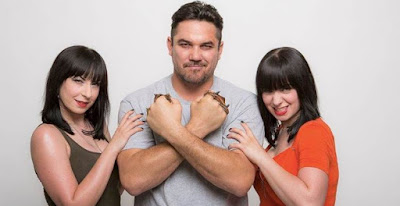 How on earth did you get Dean Cain to act so mean and angry? And how challenging was it choreographing fights with WWE wrestler Paul ‘Big Show’ Wight?

Jen: Good guys play AMAZING bad guys, just no one ever gives them the opportunity. Dean Cain is such a good man. He's a real life superhero. It's a nice break from reality for him to be a bad guy. Mason isn't really bad and to that point neither is Big Show (Victor Abbott). They're both victims of their circumstances, they're both doing what they feel is the best from some pretty bad options. Paul and Dean both trained so hard for the film. Paul is a literal giant, so we adjusted the action for him. He's lethal.

Sylvia: I've never worked with a team so ready to go and push themselves in a film. That was so important to making this film because we only had 15 days to shoot it & every day there was a coordinated fight sequence for Mason, played by real life Super-man, Dean Cain. He would come to set with this great attitude, look out for everyone, kill it on camera, then head to the gym with the stunt team when we wrapped to get the fight perfect for the next day. I would work with Dean forever if I was so lucky. Paul was also a big surprise as we are huge wrestling fans, so we had been fans of his work for years, but I had no idea what an incredible actor he was. So dedicated and down to earth. When you're the biggest guy in the room, you figure out how to put people at ease, he has this charisma and star quality. He was such a pro with the fights too.

Kimani Smith was our stunt coordinator and Dan Rizzuto was our fight coordinator, and with Vancouver's finest stunt people, they created this very down and dirty prison style of fighting. We had so many stunt actors and actors who could do action in the roles to make sure all the violence was completely amped up.


The film has been described as an “all-male maelstrom of mayhem” and “hell in a cell”. How would you describe it?

Jen: That one summer I spent in an all-male prison, ha ha.

Sylvia: I adore 'All-male maelstrom of mayhem'. I could call it face punch, the movie.

VENDETTA heads up Horror Channel’s VENGEANCE SEASON. Have either of you had reason to be particularly vengeful in your lives?

Jen: I work in film. I am blessed to have seen the worst of people as well as the best. Kindness can be mistaken for weakness and people will try to take advantage of you when you have a good heart. I've learned to be guarded, not vengeful. I'm a Catholic. I'll wait on the wrath of God, ha ha.

Sylvia: The best advice regarding vengeance came early in my career from a very successful friend, he said the best revenge is to live a good life. The people who hurt you only win if you sink to their level to destroy them. Just do you. Be kind, treat people with respect & the whole world will open up to you.


You obviously have a great affinity with the wrestling world. Have you ever been tempted to get into the ring yourselves? After all, you are trained in stunt work and the martial arts…

Jen: Is it that obvious? We would love to step into the ring... and not just sneak in when they set up pre show, ha ha. I have a life-long love of wrestling. Working with wrestlers has only increased that love. They are so dedicated and driven. I'd love the opportunity to wrestle ourselves. I have a dream about both Sylv and I training at two different wrestling schools, coming up with gimmicks, everything, without the other knowing, and then coming together to fight each other. That would make a fun reality series.

Sylvia: The only two things I promised my Dad that I wouldn't do that I actually didn't was get a tattoo & become a professional wrestler. That said, we would need next to no motivation to get in the ring. We wanted to wrestle the Bellas, but they are lovely mommies now and the timing never worked out. I feel we would make pretty killer manager types.


When you look back to the days when you were forced to make ‘Dead Hookers In A Trunk’ with your own money, do you still feel you’ve got that independently-spirited drive?

Jen: Absolutely. We are far from having unlimited time and budgets. Vendetta, like all our features, was made in just 15 days. You have to know what you want and be able to roll with the punches. Having an indie spirit always saves the day because your first notion is to come up with creative solutions and not burn money. How do you make an action movie like Vendetta in 15 days? Well, it helps if there are two of you.

Sylvia: I'm so grateful that we spent that money on DHIAT, never made a dime back; my family remortgaged our childhood home to be the first investors in American Mary - so we know the weight of financing probably deeper than a lot of people. We've yet to have the big push on our films, we're still very much auteurs with a very loyal and somewhat niche audience.


How encouraged are you with the current mood to attract more women directors into genre film-making?

Jen: Right now I see a lot of talk and not much action. You see women being hired, but you don't really see them being supported to having an ongoing career. It's more like, great, we hired a women, let's find another one. I don't see established female directors getting as many calls as they should. Genre has always embraced women in front of and behind the camera. I'm happy to see the fans in support. I think a lot more has to change than a few women getting hired here and there but not really being supported to have on going careers, even with the same companies.

Sylvia: I used to be really sexist about it and throw my support behind any woman who wanted to have an opportunity & I found so many times, the people who were reaching out for help weren't the ones who needed it. I think it is important to promote filmmakers of every diverse background so that we can get more perspective and grow in our ability to empathize with lives we would never live, but at the same time, we cannot fill these places with people who have no interest in the arts and are using current political themes for a seat at the table. I used to think it was cruel how comedians made newcomers prove themselves before letting them into the group, now that I've been doing this longer, it seems essential.


Finally, what’s next for you both?

Jen: Finally an original film, our long awaited original monster movie, BOB, which is like FIGHT CLUB meets HARVEY. And we also appeared in Glenn Danzig's new feature, DEATH RIDER IN THE HOUSE OF VAMPIRES which was so much fun to shoot. I can't wait for everyone to see it.

Sylvia: It's been almost ten years since we've made an original film, so making Bob is surreal. There's a project that did not come from us that we are very excited about, hopefully we can announce that soon and it will premiere in the UK!


VENDETTA, which kicks of the VENGEANCE season, is broadcast on Horror Channel, Saturday 4 April at 9pm.