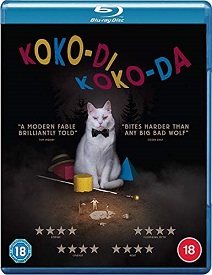 THE COMPETITION QUESTION IS CHANGED DAILY, AND ONLY ENTRIES DIRECT FROM THIS PAGE WILL BE COUNTED, ENTRIES FROM MONEY SAVING EXPERT ARE DISQUALIFIED.

And to celebrate we have a great competition and a copy on Blu-ray to give away.

Synopsis
A couple, Tobias (Leif Edlund Johansson) and Elin (Ylva Gallon), embark on a trip to find their way back to each other and repair their broken relationship. A sideshow artist (Peter Belli) and his shady entourage emerge from the woods, terrorizing them, luring them deeper and deeper into a maelstrom of psychological terror and humiliating slapstick.  Desperately the couple tries to escape, only to find themselves back where they started: in their tent, waking up at dawn. By way of their tangled dreams, we relive one particular night in their lives over and over again.  From this nightmarish atmosphere, underpinned by a haunting score and striking cinematography, a poignant story emerges about relationships, grief and reconciliation, and love as a healing force.

KOKO-DI KOKO-DA is written, directed and produced by Johannes Nyholm, a Swedish writer and director regarded as one of the most original and intriguing filmmakers of his generation. With a background in classical animation, Nyholm often mixes different styles and cinematic universes, moving freely in the border between dream and reality.  He first gained recognition for his animated film series The Tale of Little Puppetboy, widely shown at festivals and galleries around the world including Directors’ Fortnight in Cannes in 2009.  His shadow puppetry short-film Dreams from the Woods which followed also premiered in Cannes.  In 2011 his short film Las Palmas gained worldwide fame from its trailer alone and won a flurry of awards, screening in Cannes and Sundance.  In 2016 Nyholm made his highly anticipated feature film debut with The Giant, a fantastical and wondrous drama that received critical acclaim from its premiere at the Toronto Film Festival, followed by San Sebastian and a host of other international festivals.  The film won three Guldbagge Awards as well as prizes at the San Sebastian, Rotterdam and Warsaw film festivals.

Buy from Amazon at

https://amzn.to/3gEKR2l
For your chance to win both just answer the question below.

Terms and conditions
1. Closing date 14-09-20
2. No alternative prize is available
3. When the competition ends as indicated on this page, any and all entries received after this point will not count and emails blacklisted due to not checking this page first.
4. Winners will be chosen randomly and will be informed via email.
5. Only entries from this page will be accepted, the competition question is changed regularly, and entries from other websites are not allowed and will mean your email address will be disqualified.