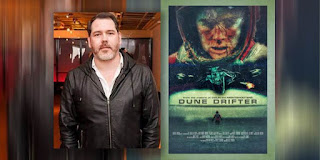 DUNE DRIFTER is a big departure from your other films. Have you always wanted to make a sci-fi actioner?
I've always loved sci-fi and have the best time working on action sequences. Putting those things together has been a lifelong ambition. For a long time I've felt that it's important to walk through the doors that open for you. The opportunity cropped up to do a sci-fi with a modest budget; I thought we could make something fun and personal. So we dove in!