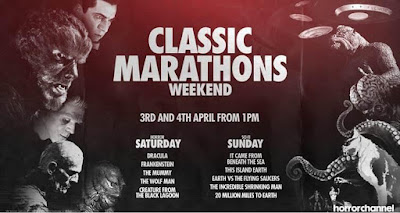 Horror Channel presents CLASSIC MARATHON WEEKEND - two monstrous movie marathons for the Easter Weekend, kicking off at 1pm on Saturday 3rd April with CLASSIC HORROR DAY, featuring some of the most iconic monster movies of all-time, including: Ted Browning and Karl Freund’s DRACULA, starring Bela Lugosi as the infamously seductive Count, James Whale’s genre-defining FRANKENSTEIN, starring Boris Karloff, Karl Freund’s mesmerising THE MUMMY, with Boris Karloff further establishing himself as one of the great horror stars in film history, THE WOLF MAN, with Lon Chaney, Jr. as the original werewolf and the pulp horror classic CREATURE FROM THE BLACK LAGOON.

Full film details in transmission order:
Sat 3 April @ 13:00 – DRACULA (1931)
This horror classic stands as the most famous and celebrated film version of the popular vampire story. Bela Lugosi delivers a star-making performance as the titular villain – his erudite, refined Dracula is at once alluring and terrifying. While director Tod Browning an effectively and haunting atmosphere. Also stars Edward Van Sloan as Dracula’s arch enemy, vampire-hunter Van Helsing
Sat 3 April @ 14:05 – FRANKENSTEIN (1931)
Considered by many to be the greatest horror film of all time, director James Whale’s masterpiece tells the story of a maniacal scientist whose obsession with creating a living being from dead body parts leads to a tragic and shocking end. Adapted from the gothic novel by Mary Shelley, the film made Karloff a star and ushered in a new era of horror. It’s been selected by many critics as one of the top hundred films of all time.
Sat 3 April @ 16:00 – THE MUMMY (1932)
Boris Karloff solidifies his status as one of the greatest horror stars in film history with his terrifying yet surprisingly poignant performance as high priest as Imhotep, a 3,700 year old mummy who wreaks havoc upon the members of the British field expedition that disturbed his tomb. Featuring ground-breaking innovations in make-up that are used to chilling effects, the film earns its place in the canon of classic horror cinema.
Sat 3 April @ 17:30 – THE WOLF MAN (1941)
Lon Chaney, Jr. is the original Wolf Man, forever cursed to roam the countryside as a werewolf. The atmospheric direction and moody soundtrack make "The Wolf Man" as frightening today as it was when it was released. This chilling film introduces another iconic character into the pantheon of classic horror film monsters and villains.
Sat 3 April @ 19:00 – CREATURE FROM THE BLACK LAGOON (1954)
American scientists get more than they bargained for on an amazon expedition when a dark tributary turns up a prehistoric man with gills. The half man/half amphibian breaks free after being captured, stealing away the only woman on the crew. This well-crafted creature feature introduces us to one of the most iconic movie monsters of all time.
CLASSIC SCI-FI DAY
Sunday 4 April @ 13:00 – IT CAME FROM BENEATH THE SEA (1955)
While on a routine mission, Cmdr. Pete Mathews (Kenneth Tobey) runs into trouble when his submarine is nearly sunk by an unknown creature, which is identified as a giant octopus from the nether reaches of Mindanao Deep. The beast has been awakened by nearby nuclear testing and now, radioactive and monstrously huge, the rampaging leviathan is heading toward the North American Pacific Coast.
Sunday 4 April @ 14:30 - THIS ISLAND EARTH (1955)
When atomic scientist Dr. Meacham is chosen to take part in a top-secret research experiment, he quickly discovers that he is really involved in an evil scheme by alien Metalunans to take over Earth. After he and Dr. Adams make their escape, they are whisked away in a flying saucer to Metaluna, where they are blamed for the destruction. Will interstellar negotiation save the day or will the scientists be forced to take part in a treacherous battle to the death?
Sunday 4 April @ 16:10 – EARTH VS THE FLYING SAUCERS (1956)
UFOs from a doomed star system invade Earth with plans of world conquest. Surrender is not an option so the human race must fight to the bitter end. Special effects are by Ray Harryhausen.
Sunday 4 April @ 17:50 – THE INCREDIBLE SHRINKING MAN (1957)
While on a boating trip, Scott Carey (Grant Williams) is exposed to a radioactive cloud. Nothing seems amiss at first, but several months later Scott realizes that he's shrunk in height by several inches. He sees a doctor, who admits that he's baffled. As Scott continues to shrink, decreasing to three feet tall, he becomes bitter, and lashes out at his wife, Louise (Randy Stuart). He begins to fear a cure will never be found -- since even as he becomes a national sensation, he's still shrinking.
Sunday 4 April @ 19:25 – 20 MILLION MILES TO EARTH (1957)
A manned space flight from Venus crash lands in the Mediterranean, losing its most precious cargo: reptilian eggs from the planet's surface. Italian zoologist (Frank Puglia), his American granddaughter, Marisa (Joan Taylor), and returned astronaut Calder (William Hopper) must battle to the creature before it destroys everything in its path.
Posted by JD at 10:27